Is Western Media Biased Against China and Russia? 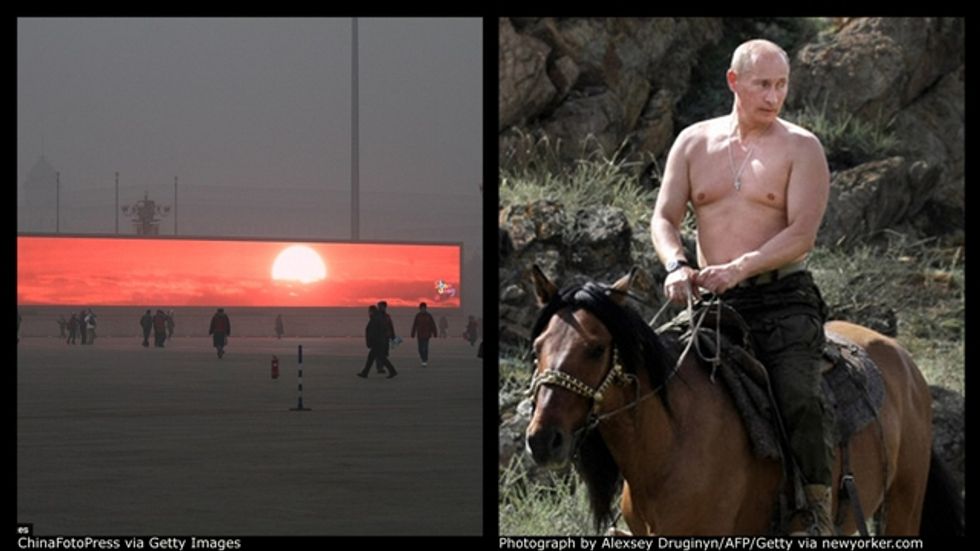 BEIJING - Western journalists (and bloggers) understandably often take deep satisfaction from exposing the corruption, megalomania, and banalities of authoritarian regimes -preferably great powers like China and Russia. But beware of the chupacabras and forgeries. Here are two recent stories that ain't so true:

2) Right image: Sorry, No photographs of shirtless Putin in Sochi hotels. It’s a story by Andy Borowitz, the Jewish genius who writes fake news and other things for The New Yorker. [Disclaimer: I haven't been to all Sochi hotel rooms, yet.]

Lots of scandals and fantastic tales in China abundant: In a country of 1.3 billion people that is more diverse than European culture you’ll always find some detail that gets you freaking... How about a dog showcased as lion in a Chinese zoo, a government official with 140 mistresses, or fake Starbucks (and other knock-offs)? Oh, and here’s a woman who had her baby boy flushed down the drain (warning, graphic content!), and here’s another mother who sold her toddler for an iphone.

So, is Western media (and the public that demands such reporting) BIASED against Russia and China? Yes, and no. NO because these stories are simply funny or sensational; but YES, yes they also confirm our stereotypes. It’s a form of prejudice joke telling in the 21st Century, no?

So, how do readers know which stories are genuine? The answer is they don’t –until, that is, the rumors have been spreading to the respective, local web community to respond in kind. If we were all that finicky about the facts, that is, because by the time a hoax is properly exposed we have probably been hooked on to the next season of kookiness: How about a Chinese version of the Riddler threatening to buy The New York Times, and "reform" it? Or 'Twin toilets' (for the REAL MAN) in Sochi, Russia – 28,000 roubles each?