Who Needs Antioxidants? No One. 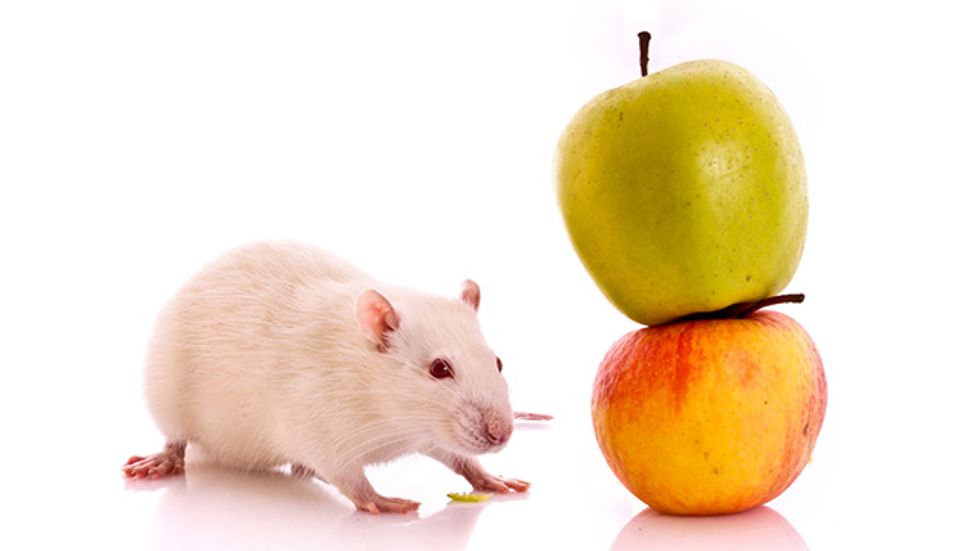 It's hard to walk down a grocery aisle these days and not notice the many food labels that shout out "Rich in Antioxidants!" or "Good source of Antioxidants!" or "Fights free radicals!" The labels don't just beckon; they taunt you. They dare you to be stupid enough to turn your back on a good source of antioxidants. "You don't really want to go around unprotected against oxidants, do you?" they seem to ask. Meanwhile you slink out of the supermarket with a bad case of pomegranate remorse, unsure if heart disease will strike you dead in the parking lot because you failed to start the day with a pint of blueberries.

Here's the thing, though. The story you've been fed about antioxidants being good for you because they stave off the buildup of toxic free radicals (which supposedly are a major cause of aging and disease)? That's all rubbish, basically. The food industry uses the antioxidant rap, along with the "low trans fat" come-on (and several other well-known gimmicks), to guilt-trip gullible consumers into preferring, paying more for, and consuming more of the very foods and beverages that many of us are trying to cut back on. This is the well-studied health halo effect, whereby extraordinary nutritional claims have the effect of tricking people into making irrational food decisions. (For more, see this study in The Journal of Consumer Research and this one in The Journal of Consumer Psychology showing that dieters are more likely than non-dieters to be tricked.) Food labels that promise "Rich source of antioxidants" are crass marketing ploys. They have nothing to do with health.

Why all the fuss, then, about antioxidants?

The Free Radical Theory of Aging, proposed in the 1950s by Denham Harman, says that oxygen-containing free radicals play a key role in the aging process because of their tendency to increase oxidative damage to macromolecules. The theory gained credence when it was found that oxidative damage to lipids, DNA, and proteins does tend to accumulate with age in a wide variety of tissues, across a wide variety of animal models. In studies of the life-extending effect of severe caloric restriction (discussed here), animals who lived the longest showed the most resistance to oxidative stress. Likewise, overexpression of antioxidative genes extends the life of fruit flies, and variations in longevity among different species inversely correlate with the rates of mitochondrial generation of superoxide radical and hydrogen peroxide. (See this paper.) From these and other highly suggestive lines of inquiry, we know that oxidative damage and aging go hand-in-wrinkly-hand.

The trouble with what we know thus far is that it's all correlative: damage from oxidative stress correlates with aging. That's different from being able to say it causes aging.

If we take a few steps back and ask a few fundamental questions, we find that the whole Free Radical Theory of Aging (which has lately morphed into the Oxidative Stress Theory of Aging) rests on surprisingly weak foundations.

Secondly, peroxides are ubiquitous in living systems (again see the Halliwell paper, mentioned above). In higher life forms H2O2 is produced in vivo by monoamine oxidase, xanthine oxidase, various dismutases, and other enzymes, under homeostatic control. Hydrogen peroxide is actually a widely used signalling molecule (see references 21 to 26 in the Halliwell paper) and recent work has shown a role for hydrogen peroxide in reparative neovascularization. (Recruitment of immune cells to wounds likewise appears to require hydrogen peroxide.)

So the familiar catechism about peroxides (and aldehydes and other "reactive oxygen species") causing harmful free radical buildup, while it makes a good story, is not well substantiated. Even if peroxides were harmful, aerobic organisms have a very powerful and efficient enzyme called catalase that converts any excess hydrogen peroxide directly to molecular oxygen and water. Molecular oxygen is, of course, extremely valuable to an aerobic cell, since oxygen drives respiration. As a secondary source of oxygen, peroxide is likewise valuable. (Anaerobic life forms such as tetanus bacteria lack catalase, for the simple reason that they have no use for molecular oxygen.) If the Free Radical Theorists were right, air-breathing animals that had no catalase should choke on accumulated hydrogen peroxide. In point of fact, acatalasemia (a genetic condition that results in lack of catalase in humans) was first reported in Japan in the 1950s. Sufferers exhibit no pathology other than increased susceptibility to periodontal infection.

Until recently, there was no direct way to test (experimentally) the idea that aging and oxidative stress are causally related. But with the advent of genetically modified mice, that's changed.

Viviana Pérez and her colleagues at the University of Texas Health Science Center in San Antonio, Texas did a thorough investigation into the life-extending (or -reducing) effects of various mutations involving oxidative enzymes in mice. (From here, the discussion gets a bit technical. Feel free to skim over the next half dozen paragraphs if the biology gets too intense.) The results of the Pérez group's mouse studies are of huge importance to the debate around antioxidants.

The ultimate test for any antioxidant-based theory of aging would be to see whether mice show fewer signs of aging (e.g., less DNA damage with age)—and actually live longer—when enzymes involved in combating oxidative stress are increased (over-expressed). The Pérez team tried exactly this approach.

There are two major superoxide dismutases that break down superoxides in cells: CuZnSOD and MnSOD (genetic markers SOD1 and SOD2). When mice were made to over-express SOD1 (so that they had two to five times the normal activity of the CuZnSOD enzyme), the mice were indeed more resistant to oxidative stress as measured by standard tests involving tolerance of paraquat and diquat. But the mice lived no longer than ordinary mice.

The same was observed for mice that over-expressed SOD2.

When Pérez et al. created mice that over-expressed catalase, they found the mice were less prone to DNA damage—but lived no longer than normal.

In mice with upregulated glutathione peroxidase 4 (another important antioxidative enzyme), enhanced protection against various kinds of oxidative stress was demonstrated. But the mice lived no longer than normal wild-type animals.

The Pérez group also tried over-expressing more than one antioxidative gene at once. No combination produced any lifespan extension.

In sum, mice do not live longer when they over-express antioxidant enzymes (singly or in combinations), even though they show heightened protection against DNA damage, lipid damage, and other typical signatures of oxidative stress.

We believe the fact that the lifespan was not altered in the majority [of] the knockout/transgenic mice is strong evidence against oxidative stress/damage playing a major role in the molecular mechanism of aging in mice.

Until the Pérez research came out, the U.S. Department of Agriculture, on its web site, maintained a large public database of ORAC (oxygen radical absorbance capacity) values for various foodstuffs. In 2010, USDA took the entire database down "due to mounting evidence that the values indicating antioxidant capacity have no relevance to the effects of specific bioactive compounds, including polyphenols, on human health."

U.S. regulatory agencies (FDA and FTC) take a dim view of unsupported claims for antioxidant benefits. European agencies are, if anything, even stricter. The European Food Safety Authority issued a lengthy opinion on antioxidants in February 2010. It stated:

A cause and effect relationship has not been established between the consumption of the food(s)/food constituent(s) evaluated in this opinion and a beneficial physiological effect related to antioxidant activity, antioxidant content, or antioxidant properties.

From time to time, food makers get a slap on the wrist for violating food labeling laws around antioxidants. In 2010, for example, the Federal Trade Commission sanctioned Kellogg's (the cereal maker) for making unsubstantiated claims regarding the ability of antioxidants in Rice Krispies to bolster children's immune systems. Unfortunately, action of this sort comes rather late. The food and beverage makers (aided by their shills in the media) have already brainwashed a trusting public into thinking "antioxidants" (an absurdly broad chemical category that includes most food preservatives) have a magical ability to neutralize "harmful free radicals." Which is nonsense. Free radicals are essential to respiration; mitochondria cannot function without them. Superoxides are an unavoidable byproduct of lipid breakdown. Nitric oxide (a free radical) is an essential neurotransmitter and vasodilator. Hydrogen peroxide (supposedly a harmful Reactive Oxygen Species) is an essential signalling molecule. Antioxidants? We're an oxygen-breathing species. Our metabolism has evolved to deal with oxidants.

Perhaps the most damning evidence against the Free Radical/Oxidative Stress Theory of Aging is that after 60 years of intensive research into antioxidants, with billions of dollars spent looking for nutrients that can retard cell aging, not a single antioxidant compound has been found that can extend human life. In fact, in a shocking number of human trials, antioxidants (beta carotene, Vitamin E, Vitamin A) have actually increased all-cause mortality.

The Free Radical/Oxidative Stress Theory (like Ancient Astronaut Theory) is founded on correlation, supposition, and a nice-sounding story—and not much else. Its core assumption, namely that the buildup of Reactive Oxygen Species in normal tissues is the main driver of aging, is contradicted by the findings of Pérez et al. and many others. At this point the theory can and should be considered discredited.

If research into aging has proven one thing, it's that in order to live longer, your best strategy isn't to eat more antioxidants. It's to eat less—of everything.