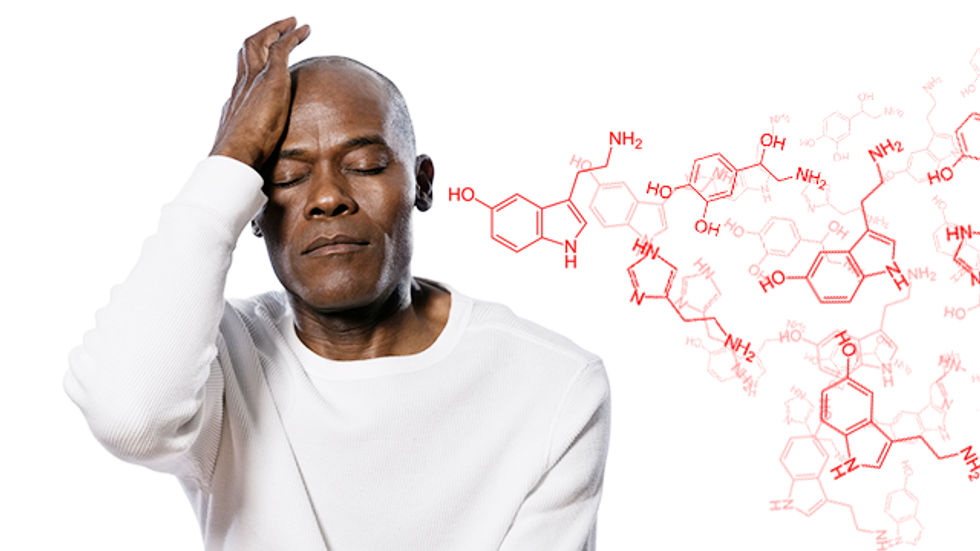 Very few countries allow direct-to-consumer advertising by drug companies, but in those that do (New Zealand, Canada, and the U.S.), the medicine-buying public has been brainwashed to believe that mental illnesses, particularly those involving depression, are caused by a "chemical imbalance in the brain." Hundreds of billions of dollars of Proxac, Zoloft, Paxil, Celexa, and other popular antidepressants have been sold on the basis of their being able to restore normal serotonin levels to out-of-whack brain cells.

The trouble is, there's no evidence that depression is caused by a serotonin imbalance. And there's no simple blood or urine test that will tell you if neurotransmitter levels in your brain are out of whack. (Serotonin doesn't cross the Blood Brain Barrier. Hence, a blood test would be meaningless.) Even if there were such a test, the mere finding that serotonin is too low (or too high) in your brain isn't enough, by itself, to establish a causal connection with how you feel. Saying that because serotonin reuptake inhibitors help treat depression, therefore depression is a disorder of serotonin imbalance in the brain, is like saying that because I'm unfocused in the morning until I have coffee, therefore I have Morning Attention Deficit Disorder caused by an imbalance of purines in my brain. (Caffeine is an antagonist of adenine receptors.) From there, it's only one step away to the chocolate-imbalance theory of lovesickness, the Red Bull imbalance theory of fatigue, and equally cockamamie theories.

As the authors of a paper in PLoS Medicine noted: "To our knowledge, there is not a single peer-reviewed article that can be accurately cited to directly support claims of serotonin deficiency in any mental disorder, while there are many articles that present counterevidence."

Serotonin-imbalance theorists have yet to reconcile the fact that while some depressed patients respond to SSRIs, some also repond to SNRIs (drugs that affect norepinephrine and serotonin levels), whereas others respond to drugs like mirtazapine that affect norepinephrine and dopamine and serotonin (or dopamine and norepinephrine in the case of bupropion), whereas for other patients (namely those who respond to tricyclics) therapeutic action involves an intricate combination of imbalances related to serotonin, norepinephrine, and dopamine transporters (SERT and NET and DAT) as well as the H1 histamine receptor, the 1A and 2A serotonin receptors, α1 and α2 adrinergic receptors, the D2 dopamine receptor, and the muscarinic acetylcholine receptor. That's an awful lot of different types of "chemical imbalance," for one illness. The literature shows that depressed patients tend to respond more-or-less equally well to any of the major categories of antidepressants (this was the major finding of the six-year, $35 million STAR*D study) , basically proving that these drugs are not highly specific in their effects. If they were indeed highly specific to certain types of depression (if some patients specifically needed an SNRI, whereas others specifically needed an SSRI, whereas others needed a tricyclic, etc.) then the patient subpopulations would add up to more than 100% of the total patient population, based on how many people tend to respond to each type of drug.

Then there's the somewhat curious fact that tianeptine, an antidepressant marketed for many years under the name Coaxil in Europe and South America, is actually a selective serotonin reuptake enhancer (not inhibitor). So apparently, some depression is caused by too much serotonin.

Researchers who've tried to induce depressive symptoms in normal subjects by lowering their endogenous serotonin levels (through a well-known dietary trick) have consistently been unable to do so. (E.g., Salomon et al., "Lack of behavioral effects of monoamine depletion in healthy subjects," Biological Psychiatry, 1 January 1997, 41:1, 58–64.) This elementary result is rarely discussed.

The Zoloft web site promotes Zoloft (an SSRI) as a treatment for Major Depressive Disorder (MDD), Obsessive-Compulsive Disorder (OCD), Panic Disorder, Posttraumatic Stress Disorder (PTSD), Premenstrual Dysphoric Disorder (PMDD), and Social Anxiety Disorder (SAD). As the authors of one paper noted: "For the serotonin hypothesis to be correct as currently presented, serotonin regulation would need to be the cause (and remedy) of each of these disorders. This is improbable, and no one has yet proposed a cogent theory explaining how a singular putative neurochemical abnormality could result in so many wildly differing behavioral manifestations." See Lacasse, J.R., and Leo, J. (2005), "Serotonin and Depression: A Disconnect between the Advertisements and the Scientific Literature," PLoS Med 2(12):e392.

The Code of Federal Regulations under which direct-to-consumer drug advertising is regulated states that an advertisement may be cited as false or misleading if it "[c]ontains claims concerning the mechanism or site of drug action that are not generally regarded as established by scientific evidence by experts qualified by scientific training and experience without disclosing that the claims are not established and the limitations of the supporting evidence…" Direct-to-consumer advertisements are also forbidden to include content that "contains favorable information or opinions about a drug previously regarded as valid but which have been rendered invalid by contrary and more credible recent information." Despite this, we still find the Paxil website saying (quite falsely): "Paxil can help restore the balance of serotonin (a naturally occurring chemical in the brain) -- which helps reduce the symptoms of anxiety and depression." Oddly, the FDA has never once cited a pharmaceutical company for these sorts of falsehoods, which have been presented over and over again in direct-to-consumer advertising about antidepressants.

It would be easier to accept neurotransmitter-imbalance theories of depression if the drugs in question worked with the same high degree of efficacy that, say, aspirin works for a headache or that insulin does for diabetes, but in fact the drugs work so poorly that the number one bestselling drug in America right now is an adjunctive drug sold on the basis of helping antidepressants work better (Abilify). When I mentioned this to a (non-depressed) friend of mine, and told him the retail price of a month's worth of Abilify (5mg, 30 pills) is a whopping $683 (making Abilify many times more valuable, ounce for ounce, than pure gold), his comment was: "Why don't you just go lease a new Acura and see if that doesn't cheer you up? It'd be cheaper, and more satisfying."

Personally, I think my friend is right. Everybody on Medicare, Medicaid, or prviate insurance who's receiving Abilify at subsidized rates should be offered a choice: continue to receive Abilify, or start driving a new Acura at no cost.

I wonder which one people would choose?