Reuniting a Divided City with an Ambitious Covered Highway Project 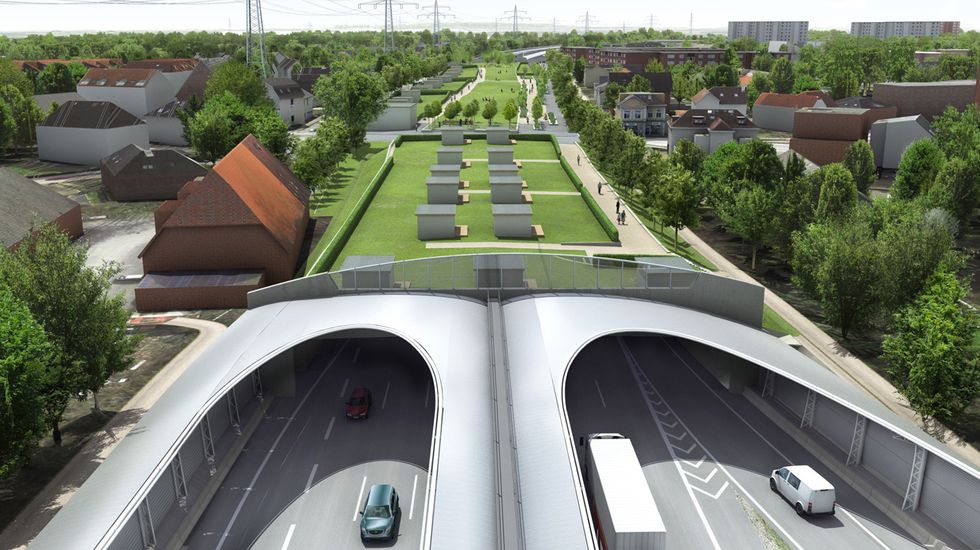 Connecting Austria, Germany and Denmark, Autobahn A7 is the longest motorway in Germany and one of the most important North-South links between Scandinavia and central Europe. When it was constructed, some 30 years ago, however, the highway divided the city of Hamburg, separating three districts and driving people away from the area.

With traffic expected to rise to 165,000 cars daily in 2025, the city had to face the problem of increasing noise pollution. The solution came from the office of POLA landscape architects in Berlin who proposed turning sections of the highway into covered tunnels, reducing the noise to almost nothing, providing new green spaces, and reuniting the neighborhoods.

"Imagine that there now is a big, loud gap in the city, about 70 to 100 meters wide, with cars, dirt, noise, day in day out, 24/7/365. After that building is finished there will be parks, gardens, quietness, bird songs, fresh air. And the parts of the city in the west and the east of the autobahn will be reunited again."

The construction will expand the highway to up to 8 lanes in certain areas and then cover them with a 10-foot thick canopy, capable of supporting full-grown trees. The covers will be built in sections and will cumulatively stretch for three miles, creating 60 acres of new green space. They will feature parks, meadows, woods, bike lanes, and the construction of almost 2,000 residential apartments, as the city’s expectations are that the project will attract new residents.

The project is expected to be completed by 2022 at a cost of around $1 billion, mostly funded by the federal government. It is part of the European Green Capital program, which each year recognizes a new city for accomplishments in environmental sustainability.