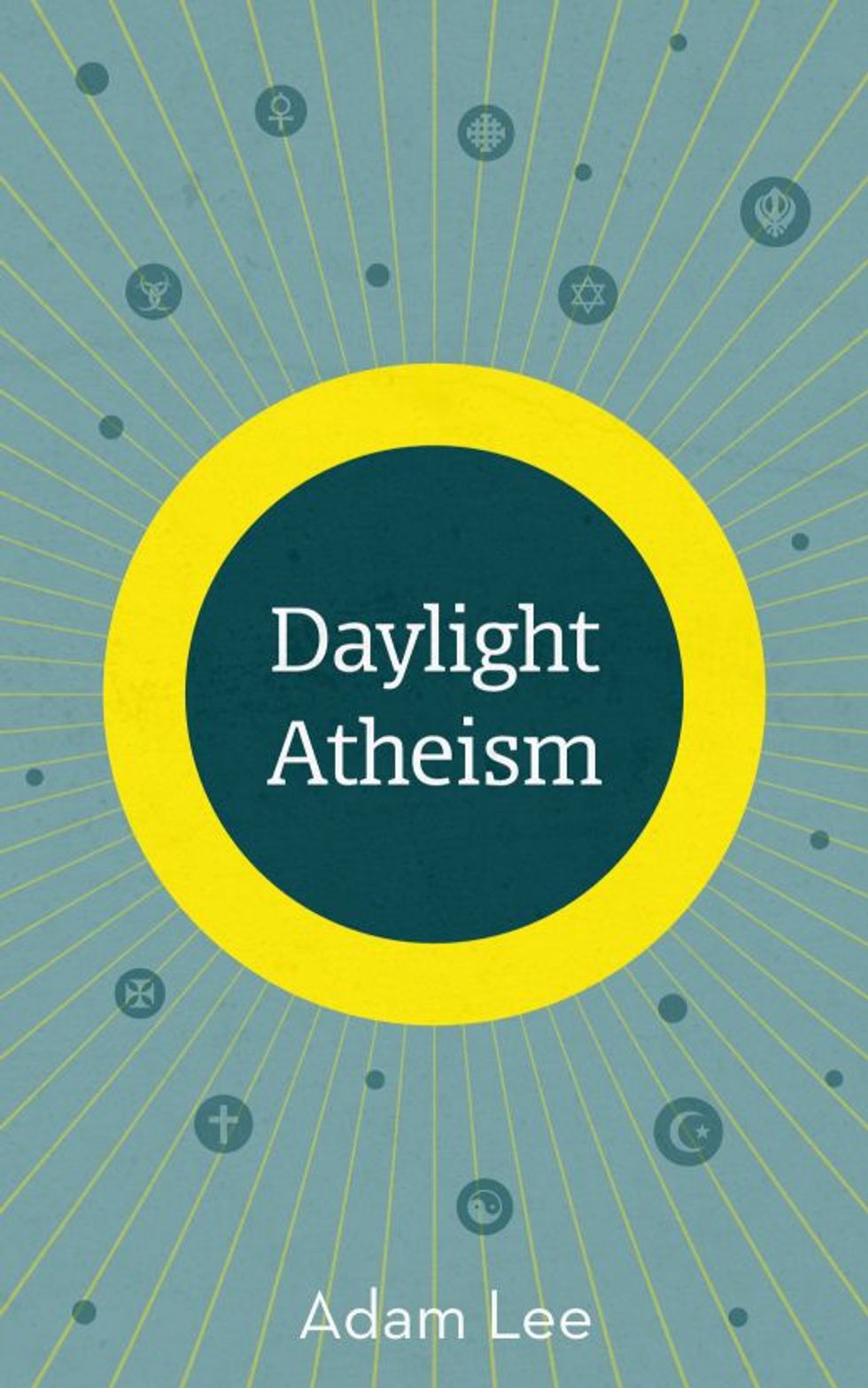 Longtime readers of this blog may remember that I wrote a book some time ago. What happened to it is something I've only alluded to a few times. Suffice to say that the full story could be a book in itself: an epic tale with more delays, false starts, and reversals of fortune than I care to remember.

But past is prologue. The upshot of it all is this: Today, I'm extraordinarily happy to announce that Daylight Atheism, the book, is being published by Big Think! It's currently available in e-reader and paperback formats on the following platforms:

The image accompanying this post is the official cover art. Each chapter of the book is based on expanded versions of some of my favorite essays from this site and from Ebon Musings. Following is a brief synopsis and some short (but very flattering) blurbs:

Over the past few decades, atheism in America has seen explosive, unprecedented growth in its numbers, influence, and political clout. Daylight Atheism both springs from and taps into the passionate energy and intensity of this nascent social movement. Following in the footsteps of other bestselling atheist manifestos, it paints a compelling picture of the dangers we face from rampant, unchecked religion, weaving together barbarous verses from ancient texts with all-too-familiar stories from today's headlines to make the case that superstitious belief is a crutch upon which we can no longer afford to depend.

In response to religious claims that atheism is too negative, that it tears down people's faith without offering anything in return, this book also presents atheism as an uplifting and even joyous worldview, one that includes a strong moral compass governed by reason and conscience, an exhilarating freedom to steer our own destiny, and a powerful feeling of transcendent awe and wonder at the glorious vastness and complexity of the universe. Daylight Atheism metaphorically recalls the emergence of atheism from the shadows into the daylight of society's discourse, and conveys the message that being an atheist isn't something to be ashamed of, but something to be proud of.

"Adam Lee has been a voice of reason for atheists (and curious Christians) online for many years and this book, as with all of his writing, makes a strong case for the atheist worldview. I suspect you'll find it very convincing since Adam does such a thorough job of laying out the evidence against faith and sharing what many other atheists before you have said about it. Whether you're brand new to atheism or a seasoned philosopher, there's something in here to help you leave the darkness of faith and come into the daylight."

—Hemant Mehta, blogger at Friendly Atheist, author of I Sold My Soul On eBay

"For those who have left biblical religion or are wavering, Adam Lee’s book is an intellectual and spiritual journey. Lee looks at Bible-belief with both compassion and unflinching honesty, but he doesn’t stop there. Through a window into his own inner life and the words of leading freethinkers, he opens up the rich depth that can be found in life – and death - beyond religion."

—Valerie Tarico, blogger at Away Point, author of Trusting Doubt

"Adam Lee has long been one of my favorite atheist writers. (In fact, his blog is a big part of why I get into the game.) And this book is a perfect example of why. His writing is both clear and passionate - a tricky balance. He dismantles theism with precision and righteous anger, and offers an optimistic vision of the alternative. Atheists will find both ammunition and inspiration here - and theists who care whether the things they believe are true are encouraged to test their faith in this white-hot furnace."

—Greta Christina, blogger at Greta Christina's Blog, author of Why Are You Atheists So Angry? 99 Things That Piss Off the Godless

"Adam Lee's writing has made him one of the most widely-read atheist bloggers - and rightfully so. This effort should secure him a place amongst atheism's most informative and relatable authors."

—J.T. Eberhard, blogger at What Would JT Do?, campus organizing coordinator for the Secular Student Alliance

"Atheists---and their argument---inspire so much fear because they're so unknown. Unlearn your fear by reading Adam's book and realizing that atheists really are just like everyone else. In fact, you probably know one and just don't know it yet."

—Amanda Marcotte, blogger at Pandagon, author of It's a Jungle Out There and Get Opinionated

"To a believer, atheism can seem dark, cold, and frightening. Adam Lee opens the shutters and lets the sunlight in. Daylight Atheism speaks clearly and passionately of the joy of living a reality-based existence guided by respect for each human person. Highly recommended."

—Mary Johnson, former member of the Missionaries of Charity, author of An Unquenchable Thirst: A Memoir

If you've got questions about the book, please post them below! I'll answer to the best of my ability.