Whenever someone famous—especially someone loved so dearly—is killed, there are facts, conspiracy theories, and even fictional creations about them.

Even some of King’s own family believe that James Earl Ray wasn’t the murderer. Or at least, wasn’t the only one involved.

Martin Luther King Jr. was in Memphis in early Apri, 1968 to offer support for striking sanitation workers who were working for less than $2 a day, and had finally had enough when two of their fellow workers were killed by faulty equipment.

He spoke the night before his assassination, seemingly knowing that his life wouldn’t last that much longer:

“Like anybody, I would like to live a long life. Longevity has its place. But I’m not concerned about that now. I just want to do God’s will… I’ve seen the Promised Land. I may not get there with you. But I want you to know tonight, that we, as a people, will get to the promised land! … Mine eyes have seen the glory of the coming of the Lord.”

As he stood on the balcony of the hotel he always stayed at, a shot rang out at 6:01 p.m. and struck King in the neck; he was pronounced dead an hour later at the hospital.

All the fingerprints at the scene of the boarding house across the street from King’s murder site were from a single suspect: James Earl Ray. The rifle, scope, and binoculars all had only his prints. The facts were all consistent: He bought the 30.06 rifle six days prior and he had been renting the room—under an assumed name—where the fingerprints were found and where the shot came from. 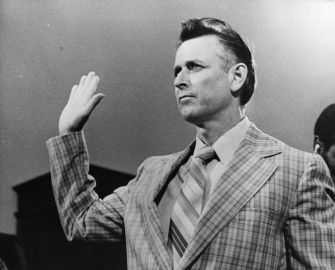 He was arrested June 8, 1968, at London’s Heathrow airport after wanted posters and photos were spread to all law enforcement agencies.

He faced the death penalty; to avoid this, he signed a detailed confession.

Because of that plea—and this is probably where the thing begins to go off the rails—no testimony was ever given in court.

Just three days after he signed the confession, he wanted to recant, claiming his lawyer badgered him into signing.

From there, things get hairy. He claimed that a man with just the name “Raoul” employed him for a gun-running operation and that he was the one who asked Ray to purchase the 30.06 rifle and rent the room at the boarding house. And he claimed that he gave the gun to Raoul just before the assassination.

His version of the full story died with Ray in prison in 1998.

The primary reason for the King family to distrust the investigation of King’s murder was the FBI itself. The agency had conducted a 10-year campaign to discredit King through surveillance, disinformation, harassment, and public criticism from infamous FBI director J. Edgar Hoover.

Indeed, in 1997, King’s son Dexter asked James Earl Ray in his prison cell, “I just want to ask you, for the record, did you kill my father?”

To which Ray responded, “No, no, I didn’t, no. But like I say, sometimes these questions are difficult to answer, and you have to make a personal evaluation,” as he hinted at a possible conspiracy. Dexter King later told reporters he and his family believed Ray’s story and supported his efforts for a retrial.

For her part, King’s widow, Coretta Scott King, stated after Ray’s death, “America will never have the benefit of Mr. Ray’s trial, which would have produced new revelations about the assassination… as well as establish the facts concerning Mr. Ray’s innocence.”

Even Rep. John Lewis, civil rights pioneer and friend of King, is skeptical of the official story.

“I think there was a major conspiracy to remove Doctor King from the American scene. I don’t know what happened, but the truth of what happened to Dr. King should be made available for history’s sake.” 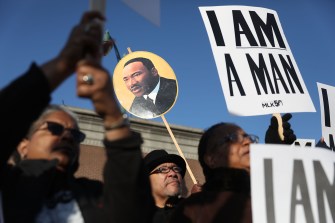 What might answer at least part of the question, which is why Ray would follow through with the assassination, lies with supporters of the campaign of well-known racist and presidential candidate George Wallace. Wallace’s supporters in St. Louis, MO offered $50,000 for the assassination of MLK. James Earl Ray’s brothers lived there and were aware of the bounty. The Ku Klux Klan also offered a bounty for King to the tune of $100,000. Indeed, James Earl Ray’s political views would seem to go along with this idea as well: He was known as a supporter of Hitler and even his initial lawyer in this case was known for defending white supremacists and KKK members. Ray even stalked Dr. King in the months preceding the assassination.

One man who investigated the case for years from the Shelby County, TN district attorney’s office was John Campbell. His office released a report in 1998 stating that Ray was responsible. “I’m not saying he didn’t have help. But he didn’t have the FBI, the CIA, the Memphis police or the mafia.”

In what is still considered one of the definitive books on the subject, Gerald Posner’s Killing The Dream: James Earl Ray and the Assassination of Martin Luther King, Jr., the conspiracy theory is put to rest for some.

But it remains a part of our culture and folklore.

Indeed, Dave Garrow, Pulitzer Prize-winning MLK biographer, described the phenomenon thusly: “The King children are part of a larger population of American people who need to believe that the assassination of a King or a Kennedy must be the work of mightier forces” rather than victims “of small-fry, lifetime losers.”

“People need to see something of a balance between effect and cause… that if something has a huge evil effect, it should be the result of a huge evil cause.”

Related
The Past
How the death of alchemy gave birth to modern science
Far from practicing witchcraft, the experimentation of medieval alchemists helped bring about the Scientific Revolution.
The Well
This is what the fourth dimension looks like
Left–Right, Back–Forth, Up–Down. What’s the fourth dimension?
▸
3 min
—
with
Brian Greene
The Present
How heat pumps of the 1800s are becoming the technology of the future
Innovative thinking has done away with problems that long dogged the electric devices — and both scientists and environmentalists are excited about the possibilities.
Starts With A Bang
JWST’s hunt for most distant galaxies gets double boost
Along with gravitational lensing and ALMA’s incredible long-wavelength spectroscopy, JWST is reshaping our view of the early Universe.
Thinking
Finding your essential self: the ancient philosophy of Zhuangzi explained
Adopting a healthy scepticism towards inherited ideas means “emptying the container of the Self.”
Up Next
Culture & Religion
Religion offered us social capital. Atheism needs to catch up.
One of the tangible benefits of religion is the community it can foster. What happens when those social connections start to decay?