The Washington Post has this to say about today’s guest: “There is no American equivalent of Bernard-Henri Lévy. Known as “BHL,” he is among the last of a quintessentially French breed, the 20th century intellectuel engagé. As a “nouveau philosophe” disenchanted with Marxism, communism and the excesses of 1968, when civil unrest roiled France, Levy has enjoyed a long and theatrical career since the 1970s, embracing journalism, philosophy, film and an outspoken advocacy for human rights.”

BHL’s films include the documentaries Bosna! And A Day in the Death of Sarajevo. Lévy is co-founder of the antiracist group SOS Racisme and has served on diplomatic missions for the French government. His newest book The Genius of Judaism explores what he sees as the crucial metaphysical role of Jewish thought and the Jewish people in the life of nations.

Today’s episode addresses torture, the question of evil, and the tipping point at which democracy becomes something else. 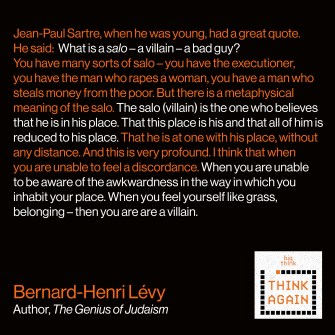 Surprise conversation starter interview clips in this episode: Paul Bloom on Torture, and Ian Bremmer on America as a Superpower.

Related
Health
The scientific highs and lows of cannibinoids
Hundreds of these cannabis-related chemicals now exist, both natural and synthetic, inspiring researchers in search of medical breakthroughs.
Strange Maps
The horrors of World War II air war, in one stark map
This graph shows how badly German cities were hit by Allied bombing raids.
Hard Science
Subatomic ghosts shed new light on the structure of protons
A Fermilab study confirms decades-old measurements regarding the size and structure of protons.
The Present
The Taoist philosophy behind Alibaba, China’s e-commerce giant
Alibaba has played a key role in China’s meteoric economic rise.
The Well
Can we condition ourselves to be heroes?
Neuroscientist Robert Sapolsky on the science of temptation, and the limitations of your brain’s frontal cortex.
▸
6 min
—
with
Robert M Sapolsky
Up Next
Starts With A Bang
How the Hubble Space Telescope changed the Universe
Science, pictures, and a revolution in what we know is out there.“The history of astronomy is a history of receding horizons.” –Edwin HubbleThe Hubble Space Telescope took its first images in […]