When they announce the nominees for the best production design at this year’s Oscars, you’ll recognize the names of the films (The Martian, The Revenant, etc.) more than the names of the nominees. But there’s one name you’ve probably never heard of that should be listed with all of those films — the man who inspired film producer David O. Selznick to create the title of production designer in the first place: William Cameron Menzies. Film historian James Curtis’ new book William Cameron Menzies: The Shape of Films to Come restores Menzies to his rightful place in movie lore as the forgotten figure who turned American movies into art. 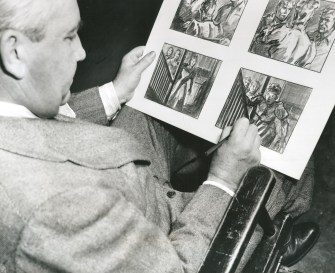 “[Menzies]’ not just the father of production design.” Orson Welles once wrote in a letter. “He’s the only one who ever did it in his own time.” At a time when filmmaking still mimicked the stage, Menzies — a former art student and insatiable drawer — saw the potential for more. “He brought the illustrator’s eye to the camera and graphic validity to an art form that was all too often theatrical rather than cinematic,” Curtis writes. By introducing the ideas of storyboarding and visualizing every scene first (example shown above), Menzies “revolutionized the look and technique of American motion picture production,” Curtis argues. 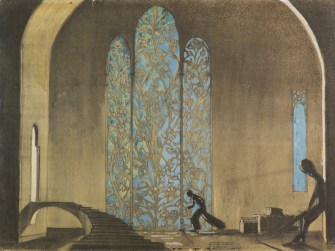 After studying architecture at Yale, a stint in the Army during World War I, and more study at the Art Students League of New York, Menzies got his start as an assistant to Anton Grot working on silent films in the first “Hollywood” — Fort Lee, New Jersey. Under Grot, Menzies learned that illustrations were useless if they couldn’t be translated for the camera. Menzies quickly built a reputation as “an advocate of the ‘artistic’ picture — staging a film with an illustrator’s values,” Curtis writes. Menzies lent directors “an extra measure of artistry” through his illustrations and architectural set models. Menzies’ breakout moment as a designer, however, came in the production of Douglas Fairbanks, Sr.’s The Thief of Bagdad (example shown above). 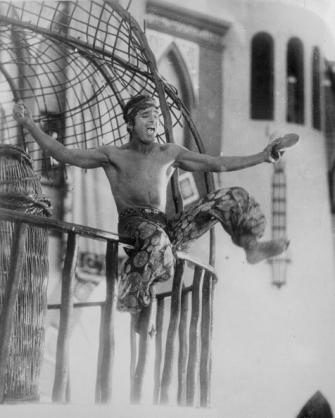 Production for The Thief of Bagdad languished as Fairbanks and his producers struggled with the look of the film. Upon seeing Menzies’ designs, however, Fairbanks (shown above, in character) jumped at the chance to jump about the world Menzies envisioned. “What Fairbanks saw bore little resemblance to what most art directors produced at the time,” Curtis explains. “Instead of presenting empty rooms of charcoal or crayon, Menzies had approached the subject as if illustrating a storybook, rendering Bagdad in ink and vibrant watercolors and placing Fairbanks’ muscular character in the center of each scene.” As workmen built the sets, Fairbanks insisted every detail match Menzies’ illustrations. Raoul Walsh may have directed the film, but he followed Menzies’ vision, which set new standards for movies as art. “Whatever else Bill Menzies did in his life,” Curtis emphasizes, “he would always be remembered, first and foremost, as the designer of The Thief of Bagdad.” 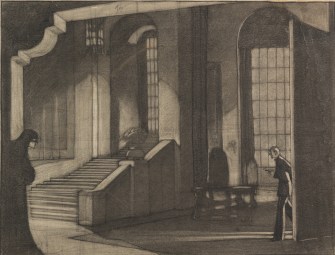 Curtis follows Menzies path through the film industry with energetic writing and meticulous research. What becomes clear quickly is Menzies’ great energy, imagination, and versatility. He’s seemingly everywhere in film history, working with all the great actors, standing alongside legendary directors from D.W. Griffith to Alfred Hitchcock, and turning every mood and genre into cinema. As big, bright, and bold as The Thief of Bagdad was, 1926’s The Bat (example shown above) exemplified the opposite. “The [opening] sequence sets the tonal palette for the movie,” Curtis explains, “long shadows, stark shafts of light, towering windows, a brooding sense of dread.” Adapted from a successful stage play of the same name, the movie version of The Bat went places visually that the original play couldn’t thanks primarily to Menzies. 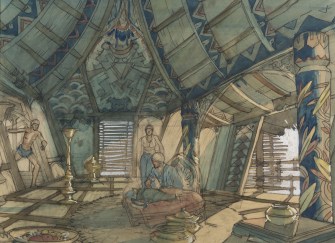 Great visuals don’t come cheap, alas, and some designs never found a home on the screen. For example, Menzies’ original vision for the title character’s desert retreat for The Son of the Sheikbroke the budget, so we can only imagine Rudolph Valentino chewing up that scenery in his final film. Fortunately, Menzies survived the transition to sound pictures and “overc[ame] the cumbersome limitations of the new technology with a shrewd hybrid of mobility and voice, boldly applying the conventions of German Expressionism to the demands of the talking screen,” Curtis writes. Just as filmmaking evolved in response to new technologies, Menzies’ style evolved, moving toward a “fluidity of montage and a purer form of cinema,” which Curtis demonstrates with a series of drawings from 1928’s The Woman Disputed. Even in films largely forgotten today, you can see how deeply the DNA of modern cinema borrows from the bloodline of Menzies’ work. 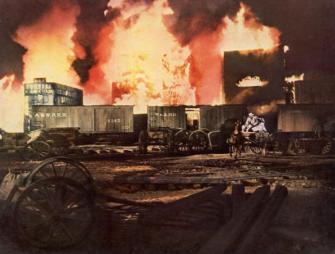 Perhaps Menzies’ most lasting work in the public imagination is his vision for 1939’s epic Gone with the Wind, the film that inspired producer David O. Selznick to dub Menzies with the title of production designer. Curtis chooses to begin the book with a breathless description of the filming of the burning of Atlanta scene that Menzies conceived and oversaw to the last detail. Curtis beautifully explains how Menzies used “a pastel look that lent itself to variations in tone and intensity according to the dramatic needs of a scene,” thus creating “moods and passages of color that brought about a symphonic cohesion to the action and built to the highpoints in the narrative.” Unable to categorize Menzies’ achievement, the Motion Picture Academy created an Oscar category especially for Menzies’ artistry in Gone With the Wind, “For Outstanding Achievement in the Use of Color for the Enhancement of Dramatic Mood.” 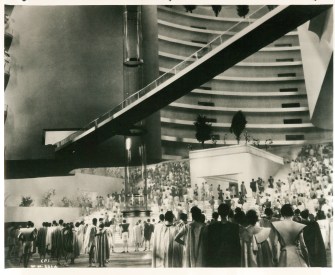 Menzies tried his hand at producing and directing (including the 1936 science fiction film Things to Come, shown above), but never matched his influence as a production designer. Menzies worked uncredited on so many films and influenced so many other film artists that it’s hard to understand where the man ends and the wider idea of production design begins. Sadly, in his final years, when the demand for his work sharply declined, “it’s possible Bill Menzies went to his grave convinced he had been forgotten,” Curtis wonders. Fortunately, William Cameron Menzies: The Shape of Films to Come by James Curtis ensures that he won’t be forgotten. As much as Menzies’ storyboards remain a staple of filmmaking today, Curtis concludes, Menzies’ true legacy lies in “show[ing] Hollywood it was possible to bring unity and purpose to the look of a film, conveying unspoken information in a way that broadened and deepened the emotional impact of the drama.” No matter who wins the 2016 Oscar for production design, the real name on the award should read William Cameron Menzies.

A philosopher unpacks the paradox in using the word “evil.”
Up Next
Surprising Science

How Will Climate Change Alter the Arctic? Just Look Back 53 Million Years to Find Out.

Around 53 million years ago, the Arctic was host to a wide range of creatures that thrived in its warm swamps. The fossil record shows how our warming climate might influence old migratory patterns to reemerge in the Arctic Circle.