The organizations that track American wages agree: There is still a gender gap. Men are still being paid more than women, though things are improving if at an aggravatingly glacial pace. Beyond that, there’s not so much agreement. Even working with the similar or the same data — many use the U.S. Census Bureau’s figures — there are different ways in which the pay gap is calculated because there are so many angles from which to look at the numbers.

Nonetheless, it’s clear to all of these statisticians that the narrowing of the wage gap is proving a far more intractable problem than one might expect. According to the Institute for Women’s Policy Research (IWPR), the earliest available data, from 1980 showed women earning just 64.2% of what men earned for the same week of work. Even though that figure in the most recent Census Bureau data, for 2016, had risen to 81.8%:

The story’s even worse for non-whites. Black women make 60 cents and Hispanics 55 cents for every dollar paid to a white male.

Why do some people think the gender gap is a myth?

Beyond those actually looking at the data, not everyone, it seems, believes there is a wage gap. According to a 2018 study from women’s investment firm Ellevest, 83% of women believe there’s pay disparity (leaving 17% who don’t), but among men, only 61% think there’s a pay gap based on gender.

It may be that the other 39% of men simply don’t want to believe they’re being unfairly rewarded for their work. “You don’t want to be the bad guy, so you kind of rationalize it in your head,” Ariane Hegewisch, study director at IWPR tells CNN. “There are lots of ways of making sense of this for yourself, which doesn’t really address the kind of more structural inequalities that I would think we need to fix.” Among the more common reasons the disbelievers doubt the data is the argument that surveys don’t fully account for men’s greater experience, an oddly circular, self-perpetuating claim. Others would prefer to believe that there may be a pay gap in other industries, but not in theirs, and it is true that there are differences among the various employment sectors.

How the U.S. government calculates the gender gap

The U.S. Census Bureau sources its data from their Current Population Survey (CPS) Annual Social and Economic Supplement (ASEC) conducted in the 50 states, though not in Puerto Rico and U.S. protectorates. As household counts, they don’t include data from those serving military duty, students away at school, the homeless, or the institutionalized.

The agency tracks the weekly wages of people who work full-time, year-round. According to the Census Bureau, a woman employed full-time earned about 80% of what a man earned, or about 80 cents for each dollar paid to her male counterpart.

There are some issues with the agency’s calculation, though. The workers whose wages it studies are just one limited group. Even among full-timers, many take time off — especially women who are twice as likely as men to do so, for caregiving or childrearing — and are thus excluded from analysis. In addition full-time, year-round workers are becoming more and more of a rarity as businesses shift to on-demand, hourly employment, and thus the analysis is not as representative of the American worker as it might once have been. Part-time workers and their wages are a significant part of the gender-gap store in 2018.

How other experts assess the pay gap

Among those who take a more all-encompassing view of the Census Bureau’s data is the Institute for Women’s Policy Research, whose multi-angled analysis reveals a couple of the ways in which different vantage points affect one’s conclusions:

Another organization taking a more expansive approach is the Pew Research Center (PRC), whose last major survey to look at the gender gap was in 2013, in which they found, among other things, that hourly wages for millennial women stood at an encouraging 93% of men’s compared to the average 84% gap. For now. It looks like men’s wages are continuing to grow faster than women’s, so the pay gap for all women, including millennials, is likely to widen again going forward.

Pew published a gender-gap update in April 2017 taking into account data from 2015. In it, they concluded that “it would take an extra 44 days of work for women to earn what men did in 2015.” We still have a long way to go.

Why does the gender gap persist?

While there seems little doubt that widespread gender bias generally results in placing a general value on the work of men as opposed to women — whether in an office or a home — there are some specific phenomena that perpetuate the pay gap. 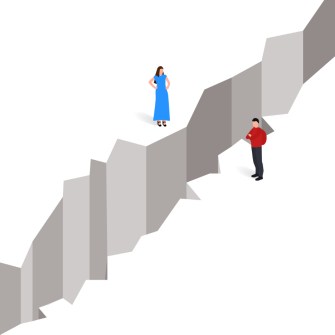 As Claire Suddath, writing for Bloomberg notes, working women tend to be clustered in lower-paying fields. Of the top 20 most common careers for both genders, only four overlap — managers, customer service reps, first-line supervisors of retail personnel, and retails salespersons — and women make less in each profession than men do.

The four jobs most likely to be filled by women are:

The four jobs most likely to be filled by men are:

Overall, as Suddath says, “The traditionally male-dominated fields pay better—so much better, in fact, that a man with just a high school diploma is likely to make more money than a woman with some college education or even an associate’s degree.”

It’s not even simply the case that women are shunted into these lesser-paying careers. When women begin to take over a previously male-dominated field, the average salary for everyone with that career drops.

As primary caregivers, the demands on women’s time are more complex, which is why the U.S. Department of Labor’s 2015 American Time Use Survey found that women working full-time work, on average 24 minutes less per day than men. According to respondents, that’s due to things they have to get done out of the office: Women are still typically the person most responsible for childcare and housekeeping, even in dual-income households. 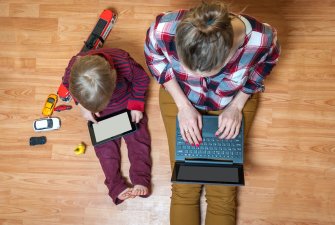 Another interesting theory comes from a study of Danish workers — the U.S. isn’t the only country with a gender gap after all — that suggests women who have children are ultimately punished with a lifelong pay gap. This is backed up by a 2009 study led by Marianne Bertrand of the University of Chicago that compared the annual salaries of men and women straight out of grad school. Men made $130,000 and women made $115,000, a 12% difference. Nine years later the gap had ballooned to 38% as men made $400,000 and women made just $250,000. “The one thing which is not changing is the effect of children,” says Kleven, referring to the presence of other variables. “This is very persistent and constant. All the other sources are declining, but the child effect sticks, and that ends up taking over as the key driver.”

What can be done about the gender gap?

There’s no question the U.S. federal government could be doing more to address the pay gap between men and women. The last serious attempt to level the playing field was 50 years ago with the Equal Pay Act and Title VII of the Civil Rights Act of 1964. Even the much-lauded Lilly Ledbetter Fair Pay Act of 2009 was merely an attempt to patch a hole in the statues created by the Ledbetter v. Goodyear Tire and Rubber Co. Supreme Court decision in 2007.

In the U.S., women’s rights are now such a partisan issue that Congress has failed 11 times to pass the Paycheck Fairness Act. This is legislation that, among other things, supports employees’ rights to share their salary figures with co-workers. Most employees already have this right, in fact, under Section 7 of the National Labor Relations Act, but many employers restrict their employees from sharing this information nonetheless. And why isn’t unequal pay simply illegal? That’s the approach taken by Iceland. Gender-blind hiring statutes would be part of a solution as well.

Finally, a cultural sea change is long overdue, one in which the needs of workers — female and male — who are caregivers and/or have children are better met by businesses. Among the many suggested steps to be taken are employer financial support for daycare, on-site daycare, allowing parents to work from home, generous and non-punitive, family leave for both parents, and enforced paternity leave, all steps that can help ensure childrearing is no longer primarily a woman’s issue, a gender-based impediment to a rewarding career and equal compensation.

Related
Starts With A Bang
Ask Ethan: Do my atoms really “touch” each other?
When you bring two fingers together, you can feel them “touch” each other. But are your atoms really touching, and if so, how?
13.8
Why the origin of life and the Universe itself might be forever unknowable
There might be a hard limit to our knowledge of the Universe.
Hard Science
200 years of exploring Antarctica
What we’ve learning from the world’s coldest, most forbidding, and most peaceful continent.
Sponsored
4 misleading personal finance tips
Personal finance advice is often over-simplified and fails to consider economic research or people’s unique circumstances.
Strange Maps
Europe’s stunning digital divide, in one map
Some Europeans really don’t want to use the internet.
Up Next
Starts With A Bang
Ask Ethan: Why Does Mars Have A Bright, Red Sky?
We know that it’s ‘the red planet’ because of the iron in its soil. But why, with such a thin, carbon dioxide atmosphere, is the martian sky so red and bright?We […]