Michael Jackson was an incredible talent and megastar whose myth continues to grow past his death. Like a true cultural hero, his legend is enhanced by stories and videos of unbelievable feats. He could sing and dance in a way no one else could.

One such inimitable aspect of Jackson’s artistic persona was his moonwalk, an uncanny glide across the floor, while another was a gravity-defying lean that first made an appearance in the video for the song ‘Smooth Criminal’ in 1988.

Now, a group of scientists and Michael Jackson fans published a paper in the Journal of Neurosurgery attempting to explain the unbelievable 45-degree tilt which was made while keeping the back straight and feet flat on the floor. Certainly, this is not the most transformative piece of research, but very curious nonetheless.

The scientists are saying Michael was “cheating”. It’s just not humanly possible to do that kind of lean.

“It’s not really possible physically to do it,” said Yagnick to CNN. ”He was cheating gravity.”

His colleague, Dr. Manjul Tripathi,explained exactly why this cannot be done, ascribing it to the fact that bending 25 or 30 degrees is the maximum you can go forward without falling on your face, adding, “I tried to do it, and I fell.”

This happens because when you lean that much, the muscles in your ankles try to support all your weight instead of the erector spinae muscles that run parallel to your vertebrae. They “act like cables,” explained the scientists, and can support the body much better. Your ankles? Not so much.

So how did Michael Jackson do it? With special shoes. 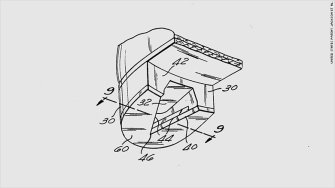 A patent filed by Michael Jackson, Michael Bush, and Dennis Thompkins in 1993 laid out the details of how these inventive shoes worked. The shoes featured “a specially designed heel slot which can be detachably engaged.” Each shoe also had a hitch (like a nail) that came out of its surface, which was utilized “by simply sliding the shoe wearer’s foot forward, thereby engaging with the hitch member,” as per the US Patent Office summary.

Here’s how this worked: 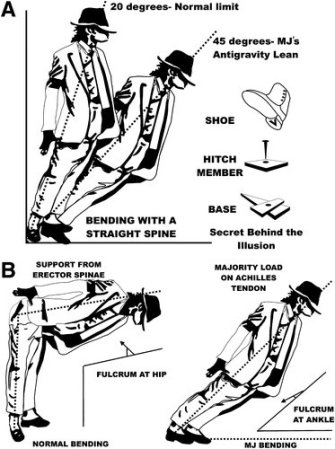 How MJ leans versus the average person: a combination of muscle power and secret shoe mechanics. (Image courtesy of Manjul Tripathi)

Still, even with such amazing shoes, regular people won’t be able to pull off what Michael and his dancers did, the scientists point out.

“Normal people, even with the shoe, probably can’t do it,” said Yagnick. “It takes a lot of practice to develop the core muscles, abs and central trunk muscles to get the strength to do it.”

In fact, chances are, an untrained person would fall and seriously injure themselves. In India, in particular, attempting to imitate Jackson’s dancing has led to injuries.

“When Michael Jackson brought out the video and then did it live on stages around the world, people didn’t know he had this shoe system,” said Yagnick. “Particularly in India, where Michael Jackson is very popular, many people tried to copy him, and some even hurt themselves.”

So, in case you want to build Michael’s shoes and try this at home—you probably shouldn’t.

Just enjoy MJ do it in this full video for ‘Smooth Criminal’.

And if you can’t get enough, here is Michael’s longest moonwalk ever, with a telling slow-motion part.

Everything else in the universe is either a particle or field. Dark energy behaves as neither, and it may be a property inherent to space itself.
Health

From "shell shock" to "combat fatigue," the wars of the past century have violently illuminated the power trauma can wield over the mind and body.
Up Next
Culture & Religion

Would you buy a smart phone that does less than your current model?

The dumb phone revolution is here, and people are joining.