“Thomas Cathcart, coauthor of the bestseller Plato and A Platypus Walk Into a Bar, will present a blog series about philosophy for Big Think, in preparation for the release of his new book,The Trolley Problem, or Would You Throw the Fat Guy Off the Bridge?: A Philosophical Conundrum.”

Many liberal arts students and graduates have heard of Zeno’s paradoxes, mind-bending philosophical puzzles dreamed up by Zeno of Elea in the fifth century BCE.  One of them goes like this:

Zeno used this scenario to prove that motion is an illusion.  Most students today would say, “Whoa, not so fast, Zeno.”  Then they struggle to figure out where Zeno went wrong.  Maybe they arrive at the conclusion that there is a primacy to “becoming” that cannot be reduced to a series of states of “being” any more than a “motion picture” can ever fully capture continuous motion, no matter how many frames per second the camera records.

That’s not a bad answer to Zeno.

There has recently been a great deal of attention given in the press to the fact that the percentage of American college students majoring in the humanities has dropped to a low of 7%.  Commentators have cited students’ need to get a job after graduation, especially in today’s lukewarm economy and with the debt burden that today’s graduates carry.  Supposedly, liberal arts students are less employable—or less immediately employable—than students in STEM fields (science, technology, engineering, and mathematics).

The American Academy of Arts and Sciences has released a report entitled “The Heart of the Matter,” arguing for the continued importance of the humanities and social sciences.  But even in the heyday of the humanities, the case for studying philosophy was a tough one.  Currently, philosophy (and religious studies) majors represent only 0.7% of college students, but in 1970, they were only 0.9%.  So what is the case to be made for philosophy?

In this blogspace, we’ll be trying to generate a conversation about the worth of philosophy.

Some arguments we will not be making:

-Studying philosophy actually does have a practical value in that it teaches you to think and argue.  This is no doubt true, but we are interested in a more basic question: why philosophize in the first place?  Philosophers, after all, don’t ask the questions they do because it will help them to think more clearly as lawyers or businessmen or computer programmers or investors.  They ask questions because they think that answering them is important in itself.  Is it?

-Philosophy is generally taught as the history of philosophy, so the importance of studying it lies in helping us to understand the worldview of, say, an intellectual leader of fifth century BCE Greece.  This is also no doubt true, but the value of studying history is also under challenge; and, besides, philosophers didn’t become philosophers to become historical figures, so we are still left with our question: why philosophize?

-Some philosophy clearly did change the world.  The British empiricists, for example, laid the intellectual foundations for the scientific revolution.  This argument is also correct, but in the tradition of much of Western philosophical argument, we are going to make our case as tough on ourselves as we can by considering arguments like Zeno’s paradox that challenge us to defend our intuitive sense of how the world works.  These too comprise a big hunk of the study of philosophy. What possible value could there be in studying them?

In addition to Zeno, we’ll look at Bishop Berkeley’s argument that there is nothing “out there” beyond the sense data in our minds (an argument we often hear satirized, rather misleadingly, with the question, “Is this chair really real?”)  And we’ll look at the so-called trolley problem and its variations.  (Would you divert a runaway trolley that was about to run over five people onto a siding, even if that meant the trolley would run over the one person on the siding?  Better one than five, right?  So would you push a person into the path of a runaway trolley in order to stop the trolley and keep it from hitting the five?  Same deal, right?  Kill one, save five?  Yes?  No?  Discuss.) 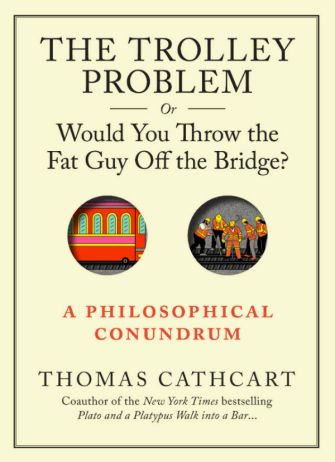 Why does Seattle continue to be a place that nurtures the development of breakthrough technologies but not Minneapolis, Memphis, or Minsk?
Up Next

Talent, Education, and the Marketplace

A life well-lived is likely to serve others while satisfying our inner passions. When people get lost in their lives and careers, Sir Ken Robinson would argue, they’re usually serving one at the expense of the other.