The steep slope of the scowling expression.

Human nature is part of nature too.

Large wave or waves, coming after a succession of lesser ones.

Surfers know the danger of being caught in one of these cycles.

First slight ruffling of the water after a calm.

Light rain that still manages to get you soaking wet.

The perfect word to yell out when you leave your umbrella at home.

Practice of placing quartz stones in moorland streams so that they would sparkle in moonlight and thereby attract salmon to them in the late summer and autumn.

While this holds little practical utility for most of us today, it's an example of the complex relationship between humans and nature and our attempt at condensing seemingly disparate realms—vision; nighttime; hunting; seasons—into one word. Also, pay attention to Macfarlane's "user-value framework" explained below. To have a language that describes a world that doesn't include us in its workings is essential.

Footprints of creatures as they appear in the snow.

Weathermen have gotten better, but not that good...

A seaside pebble which was shiny and interesting when wet, and which is now a lump of rock.

Sudden power of heat felt when the sun comes from under a wind-shifted cloud.

The light breeze that blows through your armpit hair when you are stretched out sunbathing.

Hole deliberately left in a wall for an animal to pass through.

To throw flat stones so that they skim on the surface of water.

I wrote an entire song to describe the feeling I had when doing this as a kid. Little did I know it was already named!

Sucking sound made by waves against a ship's side.

Splashed with mud by a passing vehicle.

To wander aimlessly, unguided by outcome or destination.

Is this even practiced in a world with GPS?

Steam that rises from the moor when rain is followed by hot sunshine.

To create what he termed a "psychedelic society," the ethnobotanist Terence McKenna declared that we must completely remake "our fundamental ontological conceptions of reality." In order to accomplish this, he suggested a new language to address the new reality we are embarking upon. "A new reality will generate a new language," he wrote in his essay, "Psychedelic Society." "A new language will make a new reality legitimate and a part of this reality."

Humans structure reality by how we name things. A language is not only a means for transferring ideas and directives to others; it serves as a guiding philosophy for how you understand reality. McKenna was imagining a new future, yet he also knew that the archaic techniques of ecstasy provided by shamanism was a means for looking back to reconstruct our present reality. In some ways he was suggesting the resurrection of an old language for new purposes.

Likewise, British writer Robert Macfarlane (recently featured on the Think Again podcast) has devoted his career to understanding and, at times, translating the natural world (for us novices, at least). His book, Landmarks, is an attempt to create a dictionary of forgotten languages that describe the world in ways that help us to understand reality differently and, perhaps, more perceptively.

"We inhabit a post-pastoral terrain, full of modification and compromise," he writes, noting that we now have difficulty imagining reality outside of a "user-value framework." Indeed, environmental decimation would be impossible if we had a better way of discussing what is actually happening to the planet. The problem is the language of technology has displaced discussion of nature. A recent edition of the Oxford Junior Dictionary added words such as broadband, chatroom, and voice-mail while deleting actor, dandelion, and heron—words the gatekeepers decided were no longer relevant to the experience of childhood.

Yet, as Macfarlane writes, "language does not just register experience, it produces it." We educate children by the words we teach them. Australian environmental philosopher, Glenn Albrecht, coined the term solastalgia to describe "the pain or distress caused by the loss or lack of solace and the sense of desolation connected to the present state of one's home and territory." That's a word millions of his countrymen are feeling at this very moment.

"One of the major things is the recovery of language, which is being lost in a world which is transforming so rapidly that the old words for the way that humans have culturally and bio-physically evolved are being lost. He's reviving them and putting them back into the language."

We can only see what we name. A culture deficient in terminology is incapable of registering what is being destroyed in terms of environmental as well as personal awareness. The above 20 words from Landmarks remind us of what is possible to imagine—and experience—when we have names for it. 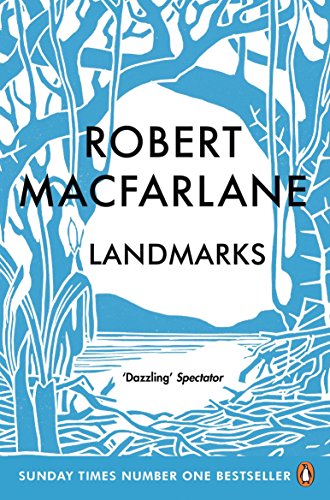