“Writing about music is like dancing about architecture,” somebody once said. But what about singing about art? Walter Martin, former member of the alternative music group The Walkmen, answers that question in his new album Arts and Leisure. Using quirky, idiosyncratic vocals, lyrics, and instruments, Martin presents not another boring art history lecture, but rather a lesson about how a personal engagement with art as an integrated part of one’s existence can help you, too, make music for your eyes. 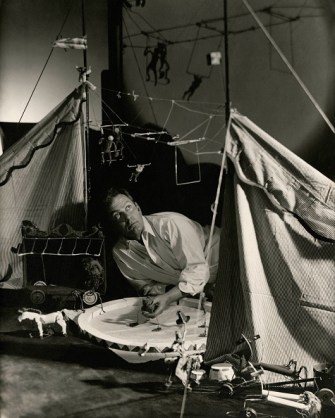 As a follow-up to his debut solo album of songs aimed at children, We’re All Young Together, Martin first considered an album of funny songs about art. “I wrote all these funny songs and I got sick of them,” Martin remembers. “Then I wrote all these serious songs and realized they were boring.” Finally, “I broke my back writing a two-minute song about Alexander Calder’s miniature circus and I thought it was perfect — it was whimsical and weird, but also had personal ideas about art tucked in there that gave it the depth and warmth I was looking for.”

From that whimsical, weird starting point, Martin went on to write the rest of the album, which varies from direct references to art to subtler, indirect references, but all of which are deeply personal. Martin taps deeply into his memories of seeing Calder’s Miniature Circus (shown above) at the Whitney Museum in New York City, giving you a warm, firsthand account rather than a cold, analytic study. 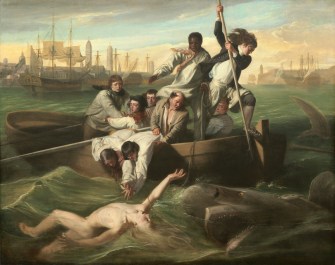 Calder’s circus got Martin started, but John Singleton Copley’s painting Watson and the Shark(shown above) exemplifies the best of Art and Leisure’s leisurely approach to making music out of visual art. Growing up in Washington, D.C., Martin remembers visiting the National Gallery of Art and being profoundly bored by most 18th century art, especially the portraits of the rich and famous. (Martin inserts this story in the middle of the song “Watson and the Shark” in an almost Woody Guthrie-esque, folksy aside.) Stumbling upon Copley’s Watson and the Shark in the middle of all those boring portraits, however, startled the young Martin.

“John Singleton Copley / you got me hypnotized,” Martin sings in “Watson and the Shark.” “John Singleton Copley / it’s music to my eyes, to my eyes.” Copley “hypnotized” Martin with that painting of a shark attack (as well as another Copley work, A Boy with a Flying Squirrel) by sheer surprise, by “attacking” his imagination with art’s power to defy expectations. That sense of surprise and unconventionality appears in Martin’s music in everything from his quirky, sometimes Bob Dylan-esque delivery to his playing “drums, guitar, upright bass, piano, trombone, organ, mandolin, xylophone, slide whistle, glockenspiel and just about every noise-maker and percussion instrument you can imagine.” Just as Copley throws everything but the kitchen sink at you in Watson and the Shark, Martin throws everything he knows at you to make the “music for your eyes” in Arts and Leisure. 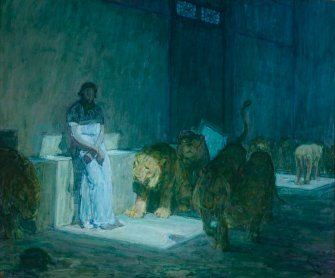 If Martin were a painter, he’d be an Impressionist — not a “blurry haystacks at sunset” Impressionist, but someone who conveys the impressions he experiences from art in a clear, evocative way. In “Daniel in the Lions’ Den,” Martin resists describing Henry Ossawa Tanner’s painting of the same name (shown above), but describes instead “being moved by it and trying to figure out what it’s about.” In this “personal take on a Biblical story that [he] never totally got,” Martin captures the sense of wonder and questioning that fine art can inspire. Looking and singing about Tanner’s “big room filled with lions / so peaceful and quiet / with a young man standing so calmly by,” Martin makes us all take a longer look and think. 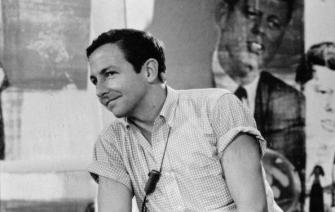 And, yet, Martin never gets bogged down in the art, which is, instead, always a springboard for self-discovery. “Down by the Singing Sea,” the song with the most infectious hook on the album, started out as a song about how he spent childhood vacations with his family at the same Florida beach that artist Robert Rauschenberg (shown above) lived at. “This song is about the beach where Robert Rauschenberg spent the last 30 years of his life,” Martin explains. But, “the verse that was about Rauschenberg was cut and it ended up just being a beach song, but to me it’s about Robert Rauschenberg.” Rauschenberg remains in the song in spirit — the inventive, explorative spirit found in his art. Even without dropping names, Martin manages to drop art history into his music. 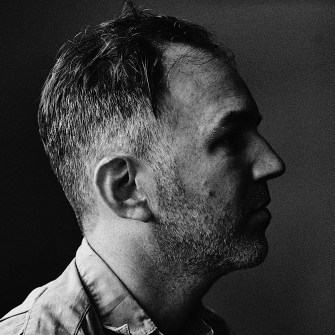 Martin claims only a “shaky grasp of college art history” supplemented by his travels as a musician and brief, pre-fame employment in museums. Arts and Leisure may not help you earn a degree, but it will give you a greater degree of appreciation of the essence of art beyond knowing the right names, dates, and movements. In the song “Michelangelo,” Martin pictures the sculptor at work:

He’d go down to his studio

and he’d wait ’til the ideas flowed.

Then he’d take out his hammer and spike

and chip at that marble ‘til the marble looked right.

that’s why they call me Michelangelo!”

Arts and Leisure helps your feel and understand the necessity of every last “oh” in Michelangelo’s art. If you’ve never gotten art, if every explanation makes as much sense as “dancing about architecture,” then give Martin’s Arts and Leisure a good, long listen and learn to look with your eyes, and ears.

A study finds that older adults who cannot balance on one foot for ten seconds have an 84% higher risk of death than those who can.
Up Next
Culture & Religion

This Symbol Is Trying to Change Perceptions of Disability

Some disability-access points across America are getting a makeover. The signs now feature a person active and engaged. This change in imagery is part of a larger initiative called the “Accessible Icon Project.”