March Madness has been especially maddening this year. Seven upsets occurred in the first round of sixteen games. While things have mostly evened out with only eight teams left—save Loyola Chicago, who eked out victories over higher-ranked Miami and Tennessee—never before had a sixteenth seed usurped a top team until UMBC trounced Virginia.

Pontificating over games has been the occupation of unpaid sports fans for decades (and probably much longer). Many ex-NFL and -NBA players are members at the gyms I teach at, where the locker room provides colorful commentary on a daily basis. While I’m not going to attempt to describe the exact reasons UMBC shut down Virginia, a larger concept explains this phenomenon nicely: group flow.

A 2000 paper, published in the journal, Anthropology of Consciousness, written by Mihaly Csikszentmihalyi, the Hungarian psychology professor who coined the term “flow,” along with Jeremy Hunter, the Founding Director of Executive Mind Leadership Institute, provides the basis for our understanding of how flow states are achieved during game time.

The paper looks at the seemingly disparate realms of contemplation and sports, both of which the authors feel are victims of Cartesian dualism, with the concept of “mind over matter” pervading both of these fields. The authors instead champion the potential for integration of mind and matter, a state flow achieves. We’re taught the separation of mind and body in elementary physical education classes:

In this purely physical mode, the constructive role of the mind is generally ignored in favor of numbing militaristic drills of counting push-ups, sit-ups and pullups in an effort to make a “physically-fit,” if not also alienated, student.

Most classroom instruction, they continue, is really just the cognitive equivalent of counting push-ups. Standardized tests do not reflect the nuances of real-life decision-making; they never touch the grey areas. This split mindset began with Plato’s Phaedo (or at least was first written down there), trickling down to Descartes’s time:

Descartes extended the Platonic notion and restated the schizophrenic view of human experience in which the mind was “senior partner” to a mechanical and lifeless body.

In sports, the body is not lifeless. Yet our reverence for machine metaphors has been applied to physical movement, which misses an essential component of mind-body integration. Csikszentmihalyi and Hunter counter this narrative by dispelling the validity of Cartesian dualism by reminding us that consciousness is body-dependent, a well-known fact in neuroscience research. The brain is not separate from the body; the “mind” requires the collaboration between the two.

They then discuss the means for structuring consciousness to produce states of optimal physical performance. Csikszentmihalyi’s “flow” was previously understood as being “in the zone,” a common sports reference representing moments when everything is going your way. A merging of action and awareness equates to each step, each pass and shot, and every movement is fluid and confident. 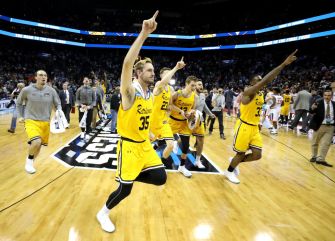 The UMBC Retrievers celebrate their 74-54 victory over the Virginia Cavaliers during the first round of the 2018 NCAA Men’s Basketball Tournament at Spectrum Center on March 16, 2018 in Charlotte, North Carolina. (Photo by Streeter Lecka/AFP/Getty Images)

To achieve flow states the challenge must be attainable. If I train for six months and hire an experienced guide in order to scale Mt Everest, I’m confident I could pull it off. Drop me at the base next week and say “go ahead,” and there’s no chance. With training, flow states become more attainable, but you have to know you can achieve the goal—which UMBC did—and, more importantly, you have to enjoy the activity. Drudgery won’t get you there.

The goal must also be clear. The above case is easy to imagine, though not achieve: shut down Virginia’s offense. Yet achieve they did. UMBC went a step further by attacking with their offense; it was the first time all season Virginia gave up more than seventy points. The authors note that even with a larger goal (winning the game), smaller ones can be integrated:

Instead of just making a basket, a basketball player might choose to make baskets only with a particular set of moves, thereby increasing the challenge facing him and allowing a more robust exercise of skills.

When you’re the underdog it’s doubtful you’ll focus on anything but the prize. And for this, you’ll need unambiguous feedback. The merging of action and awareness is felt through physical sensations, such as fluidity and grace, but the most feedback you’ll receive during a basketball game is on the scoreboard. To beat the other team, unrelated concerns need to take a back seat:

To achieve a flow state, a person must be emotionally skilled enough to put other concerns away and become engaged with the task. In essence, to focus on the essential figures which matter and allow everything else to recede into the background.

Another ingredient is the loss of self-consciousness. This is especially tricky in team sports. I know from personal experience. During my senior year of high school, my team led the county in three-pointers (by a lot) and boasted two of the top ten scorers in the league. Yet we finished 11-10 and didn’t make states or counties. Those two players battled one another every game; loss of self-consciousness is impossible when ego dominates.

Loss of self-consciousness leads to a sort of transcendence, which is what we witnessed after the clock ran out on Virginia. The notion of self and other, part of what makes us feel dualism actually exists, collapses “into a single, unified, and harmonic action.” There’s a neurological correlate to this. When flow states were measured through brain scans, researchers had expected many regions to fire. The opposite occurred: areas dealing with identity and fear were shut off.

This is why UMBC won: they had transcended their ranking, had the skills to achieve their goal, and did so together. A prime example of group flow.

While flow states are regarded somewhat magically, the authors conclude that they actually represent what we are as animals: an integration of mind and body, never mind versus body. The more we train one domain, in this case, contemplation (mind) or sports (body), and forget the other, we’re missing half the experience.

The flow experience relies on mental constructs like goals and mental abilities like concentration and awareness of feedback to understand and guide the body. In essence, there is no separation.

When battles raged in ancient cities, their rocks blazed so brightly that they could be reoriented according to Earth’s magnetic field.
Up Next
Big Think Books

Darwinian differences: How the theory of evolution viewed women as inferior

In line with his own ingrained assumptions, the standard ones of Victorian England, Darwin maintained that female inferiority is an inescapable consequence of nature.