Some artists fascinate on frank freak appeal. Countless college dorm room walls feature the art of modern mind-bender Salvador Dalí. Yet, four centuries before Dalí, Dutch artist Hieronymus Bosch created some of the freakiest art ever. Now, on the 500th anniversary of Bosch’s death, not only does a once-in-a-lifetime exhibit gather together many of the master’s works, but also the Netherlands itself lets the national freak flag fly with a year-long celebration of their (and our) freakiest artist ever. 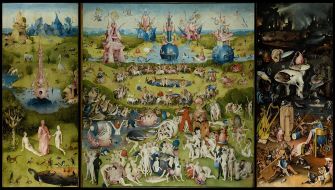 As with so many other ancient artists, we know little about Bosch other than when and where he worked and died. Bosch took his name from his birthplace, ‘s-Hertogenbosch, which itself refers to the surrounding forest. Trying to piece together the man from the work feels like finding yourself lost in a forest of religious imagery, obscure (possibly personal) visual references, and a pervading sense of gloom alternating with outrageous joy. Perhaps the greatest example of Bosch’s bi-polarity is his “greatest hit,” The Garden of Earthly Delights (shown above). 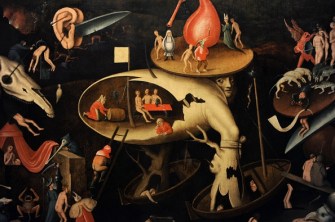 Reading the triptych from left to right, we start on the far left God with Adam and Eve in the Garden of Eden. In the middle panel, the party really gets started with a profusion of naked bodies cavorting in a landscape filled with tame animals and wild architecture. In the right panel, however, damnation looms darkly as a reminder of the price of sinfulness (detail shown above). As dreamlike as Bosch makes the delightful garden, he makes the scenes of eternal damnation nightmarish with devils leading you to the hellfire and bizarre scenes of a giant blade knifing through a huge pair of ears joined by an arrow. Dalí couldn’t have said it any better or more befuddlingly. 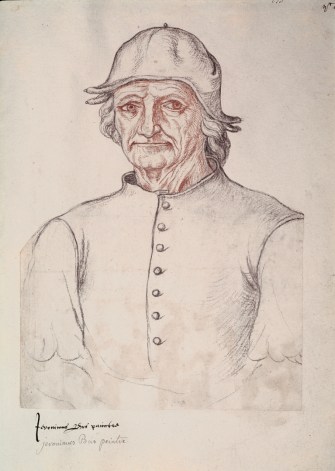 The Dutch enjoy a long line of world-renowned artists from Pieter Bruegel the Elder to Johannes Vermeer to Rembrandt to Vincent Van Gogh, but that line begins with Bosch (shown above in a posthumous portrait by Jacques Le Boucq). Bosch’s wild individualism and wilder imagination set the standard for Dutch artists all the way to modernity. Even those lacking Bosch’s freak factor, such as Vermeer and Rembrandt, still embodied Bosch’s dedication to an individual vision. In the exhibition Jheronimus Bosch–Visions of Genius at Het Noordbrabants Museum, Den Bosch, Holland, Bosch has his greatest homecoming in modern history. 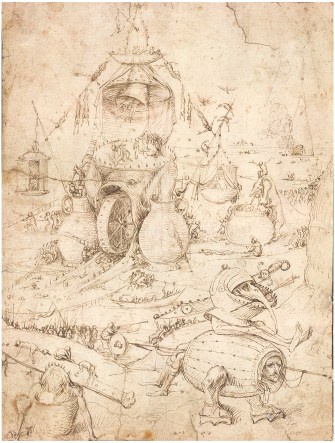 Jheronimus Bosch–Visions of Genius gathers together 20 of Bosch’s 25 surviving paintings and 19 of 25 surviving drawings, an incredible accomplishment considering how few, how valuable, and how widespread these works are. To see drawings such as the privately owned Infernal Landscape by Bosch beside better-known works is to see even deeper into Bosch’s bizarre artistic psyche. The Garden of Earthly Delights, alas, won’t be joining the party, but there are more than enough delights to go around. 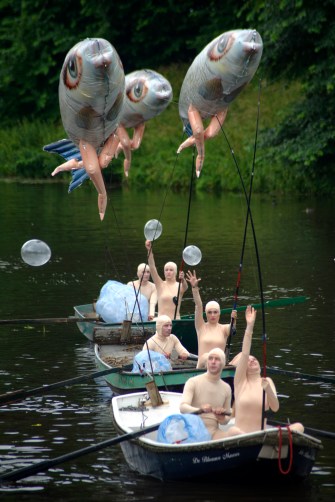 But you can’t confine Bosch’s 500th anniversary to museum galleries. The Bosch 500 celebration literally spills out onto the streets and into the rivers (shown above). Numerous events will celebrate Bosch’s art by recreating the weirdly wonderful scenes and figures found in his art. Americans may laugh at these pictures and chalk them up to the liberal Dutch drug laws, but these images show just how “high” the Dutch get on the hallucinogenic, addictive appeal of the founding father of their rich art tradition. And who wouldn’t want to don a flesh-colored bodysuit, reach for a giant fish balloon, and grab an oar to join in the fun? Such uninhibited public displays make Mardi Gras look tame. (And if you can’t get to the party in person, there’s a new app that allows you to virtually walk around a Bosch painting. “Enter” if you dare.) 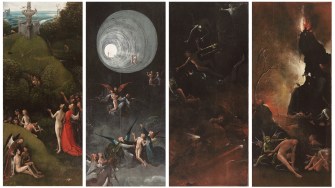 Yet, Bosch giveth and Bosch taketh away. As in the late work Visions of the Hereafter (shown above), which begins on the road to heaven, but ends in hell, Bosch encompasses the whole span of human existence — the pleasure and pain, the heavenly highs and the hellish lows. We’re still learning about Bosch five centuries after his death. As part of Bosch 500, a “new” Bosch is on display — The Temptation of St. Anthony, which languished in storage for 70 years until experts took a closer look and determined it was by Bosch himself and not a follower. (The guy wearing a funnel on his head and the sausage floating behind St. Anthony should have given them a clue.) On this 500th anniversary of Bosch’s death, it’s time to bring him back to life in all his freakishness and rediscover him all over again.

Subscribe for counterintuitive, surprising, and impactful stories delivered to your inbox every Thursday
Related
The Past

The Robin Hood of Science: The Missing Chapter

The tale of a young man driven to his death for fighting for what is right, and the young woman picking up where he left off.