The 8 Most Annoying Things People Do With Their Phones

The ill-mannered use of mobile phones in public is infuriating. Here's what you can do about it. 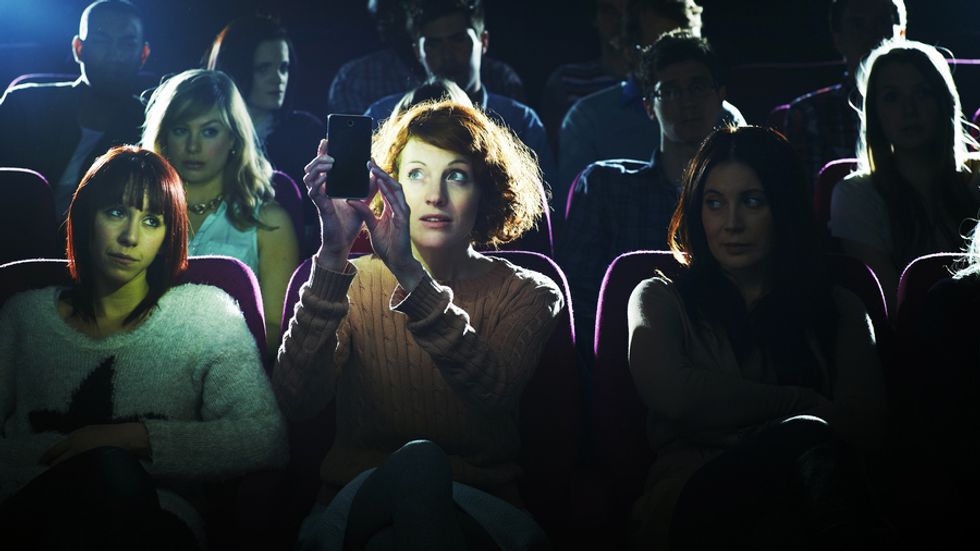 I’m not entirely sure when it became acceptable to use a speakerphone in public, but in the last week I’ve witnessed three people hold entire conversations through the speaker on their mobile phone, without caring who was listening. In one instance, I was on the subway when the woman’s phone rang. She answered it, and began a discussion with the person on the other end about where they were going to dinner that evening. Just FYI, they decided not to go out. Amy had to study for a biology exam and her professor was being “an ass” this semester, so she expected the test to be especially difficult. Oh and John just asked her out, but he is Julie’s cousin and it’d be weird. Privacy issues aside, mobile phones and applications encourage rude, discourteous behavior.

Online travel site Expedia conducted a survey this year in which they queried almost 9,000 adults in 25 countries in an effort to identify our most annoying mobile phone habits. The number one complaint? Making calls on a speakerphone. Number two? Playing music, games, or videos without using your headphones. Here is the complete list:

Cellphones, and other mobile technologies, are a significant part of our lives. Indeed, some 43 percent of adults live in a cellphone-only household, so it makes sense that we would use our phones frequently throughout the day. The Pew Research Center recently reported that 92 percent of U.S. adults own a cellphone, and 90 percent of them claim that it is frequently with them. Whether that is a good thing or not seems up in the air. A number of researchers point to the pervasiveness of cellphones as a mechanism to drive us apart, while others claim, conversely, that they bring us closer together. No one can seem to decide. What’s more frustrating is where and when we think it is acceptable to use them.

Three-quarters of smartphone owners claim it is appropriate to use a cellphone while walking down the street, on public transportation, or while waiting in line. Many of us have texted, emailed, or spoken on our phones in each of those situations, but according to Pew, over half of all Americans hear or see intimate details of other people’s lives while they are using their cellphone.

While the ill-mannered use of a mobile phone in public can be infuriating, online rudeness is increasingly ending many friendships as well. Social networks can be unfriendly places. Polarizing discourse, uninformed opinions, and aggressive commentary are commonplace on many social platforms. In an effort to bring us together, social networks seemingly push us apart. Facebook, Twitter, and others give us an ability to broadcast our views and opinions in such an uncivil way that two in five social media users report ending a friendship over a virtual squabble. In a 2013 survey, corporate training firm VitalSmarts found that:

“Social media platforms allow us to connect with others and strengthen relationships in ways that weren’t possible before. Sadly, they have also become the default forums for holding high-stakes conversations, blasting polarizing opinions and making statements with little regard for those within screen shot,” says Joseph Grenny, co-author of Crucial Conversations. “We struggle to speak candidly and respectfully in person, let alone through a forum that allows no immediate feedback or the opportunity to see how our words will affect others.”

In a recent article, researchers studied the personality types of people who enjoy arguing online. Called trolls, these folks enjoy writing incendiary posts to inflame and intensify online conversations. According to the researchers, “cyber-trolling appears to be an Internet manifestation of everyday sadism” and correlates positively with psychopathy.

Sherry Turkle, MIT professor and author of Alone Together: Why We Expect More from Technology and Less from Each Other, contends that we argue more online because we don’t see the physical reaction of the individuals we’re debating and, therefore, tend to dehumanize them. Turkle claims that when we post from a smartphone, we don’t feel like we’re doing anything of consequence. "You are publishing, but you don't feel like you are," she says. "So what if you say 'I hate you' on this tiny little thing? It's like a toy. It doesn't feel consequential."

So where does this leave us? Many of us use our devices in ways that annoy and irritate others. We use them at unsuitable times to do inappropriate things. That’s not going to stop. But, as Turkle hints at, if we can make rude behavior consequential, if we can explain to people the outcome of their actions, we might stem the rise in offensive mobile phone conduct.