"Hang on, Mom. My coffee just flew in." IBM just filed a patent for drones to deliver coffee to people that they “sense” need it. 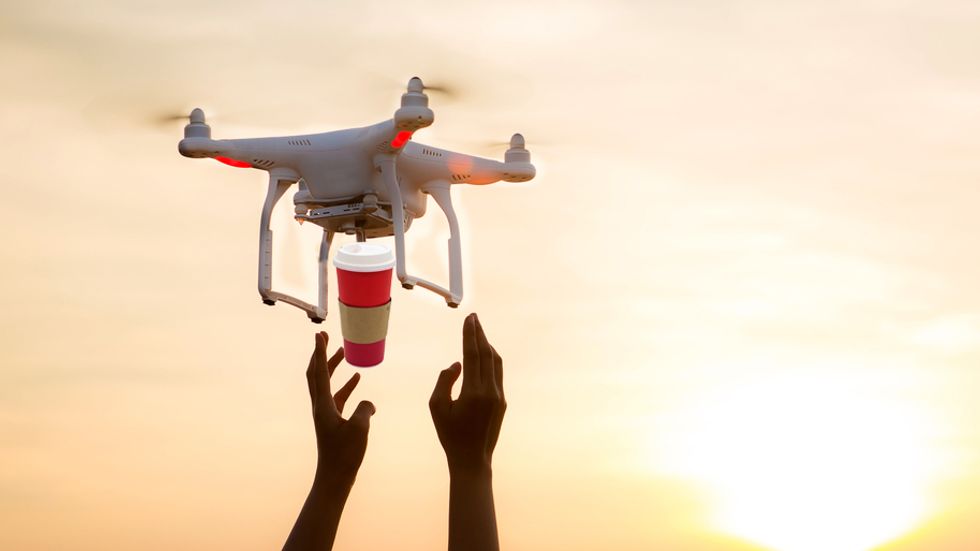 Is hot liquid zooming through the air the future we want? (Photo: Shutterstock/Big Think)

You’re standing with several other people at, say, a music festival, dog-tired from the parties the night before. Or you’re awaiting a train to work, yawning and bleary-eyed. Or maybe you’re groggily weaving your way to the parking lot at your apartment building, preparing to take your kid to school.

Suddenly, a drone drops from the sky, offering a strong cuppa joe … just for you. You happily take it from the air, your card is charged, and you’re now much more jovial as your day proceeds.

This is not such a work of fiction when you consider IBM just filed a patent for drones to deliver coffee to people that they “sense” need it, through a combination of factors such as a Fitbit or other wearable device, paired with electronic calendar notifications (“Staff meeting, 10:00 am. Everybody on deck!”). Or the recipients could flag the drone, like you would a taxi. Or even order the coffee from their app, a la Lyft or Uber.

In the patent, named (yes, in all caps) “DRONE DELIVERY OF COFFEE BASED ON A COGNITIVE STATE OF AN INDIVIDUAL,” the aim is clear.

Note that the wording of the patent does not preclude the drink being, say, a beer or cocktail. Indeed, according to CNBC, IBM also wants the patent to apply to delivering drinks in a bar or restaurant, and deciding first if the person ordering is too young or already intoxicated.

Any number of methods to ensure the person on the receiving end is actually who did the ordering are included, such as facial recognition, voice recognition, Bluetooth via phone, and electronic ID tags.

Can I blame the drone for this? (Photo: Shutterstock)

Still, the concept has its skeptics.

Colin Newell, a coffee industry expert based in Canada, raised concerns about safety.

"The fundamental flaw here is transporting hot liquids through the air," he said. "It's a shtick as much as Amazon saying it'll deliver parcels to your home by drone."