Why You, Yes You, Should Read "Moby-Dick"

I’m going to be frank with you: parts of the book are an exhausting experience. “Boring” is the wrong word, but this is not a “fun” classic nineteenth-century American novel. This is a feat of endurance, captain. 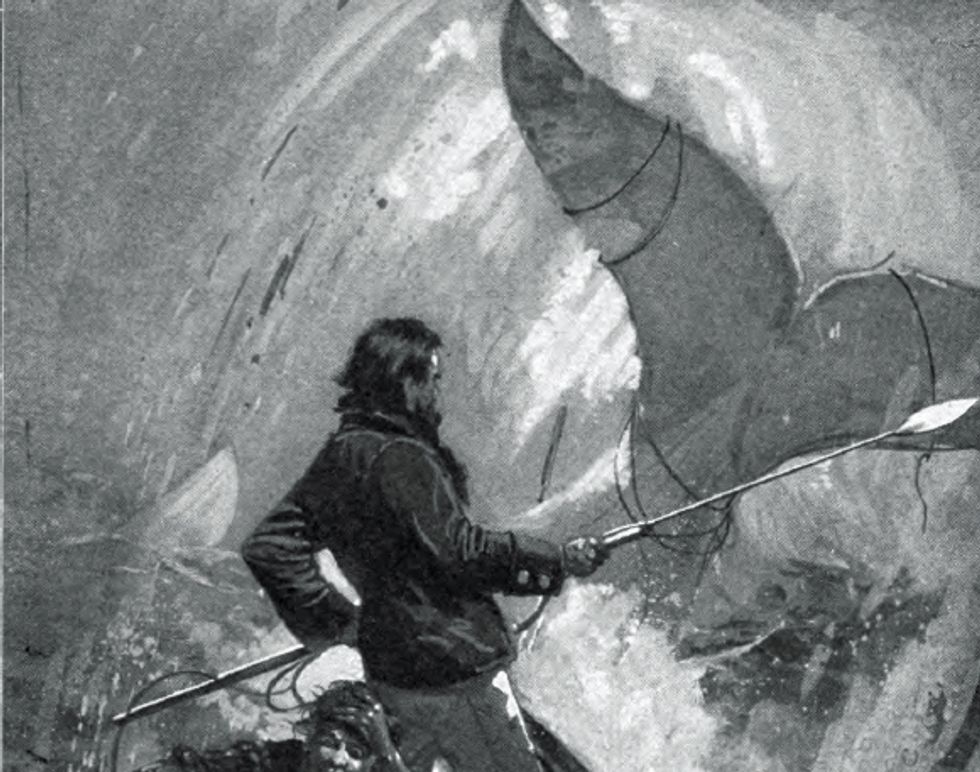 I’m happy to learn that a book called Why Read Moby-Dick? has just been published by Viking, although the title immediately prompts the question: why read Why Read Moby-Dick? If you’re hesitating on the brink of a plunge into Melville’s epic, do you really want 130 more pages to wade through first? Fortunately, according to Times reviewer Kathryn Harrison, Nathaniel Philbrick’s volume is a pleasure in its own right, even if it may be preaching to a choir of Melvilleans.

Rather than chime in with another review, I’d like to venture my own, more concise response to Philbrick’s question. After all, you’re a busy person, and the clock is ticking on this Melville decision of yours.

I love Moby-Dick as much as Philbrick does, and I agree wholeheartedly that you should, in fact, read it. But I’m going to be frank with you: parts of the book are an exhausting experience. “Boring” is the wrong word, because Melville is always at least enthusiastic about his material, and always capable of springing a great insight on you at a moment’s notice. But this is not a “readable” classic nineteenth-century American novel—that would be Huckleberry Finn. This is a feat of endurance, captain.

In an essay a few months ago I vented some frustration with what I called the Epic Male Novel. In many ways Moby-Dick is the great progenitor of that species, particularly in American literature. So many of its qualities have become familiar, or overfamiliar, through its imitators: the paper-thin plot, the esoteric digressions, the fantastical or allegorical character names, the staggering variety of voices (here ranging from the eloquently bastardized English of Queequeg to the Shakespearean diction of Captain Ahab). Melville’s pedantry is legendary: not only whole chapters but whole sections of the novel are devoted purely to regurgitation of his background research.

And yet Moby-Dick works, and works better than most of its descendants, possibly because its vast cargo of trivia is so tightly circumscribed by theme. Melville will supply occasional information about history, politics, geography—but bombard you with more information about whales than you ever thought existed. (Partly that’s because a lot of it is made up.) The result can be mind-numbing, but also oddly hypnotic.

Even among Epic Male Novels, Moby-Dick is very much its own beast. It may be the most shapeless great novel ever written. I like John Gardner’s description: “mysteriously constructed.” You’d be tempted to say insanely constructed, except that the structure always embodies its own best defense. The long stretches of tedium interrupted by bursts of gripping excitement? Exactly like the experience of whale hunting. The intense, exhaustive, narrow focus on whales? The equivalent of a claustrophobic sea voyage with an obsessive captain. And so on. The novel all but dares you not to finish it, lest you fail like Ahab.

You should seek out the book for yourself if only because it’s completely unsummarizable. You already know the three or four plot points of the story, yet whatever you’re expecting, Moby-Dick will give you something different. I remember being surprised, for example, to find that the first quarter of the book is essentially a love story. Even accounting for changed gender norms between Melville’s century and ours, there’s really no way to view Ishmael and Queequeg’s “marriage” as anything but a homoerotic romance, albeit probably an unconsummated one. And then there’s the sperm vat chapter…

My best advice is, if you’re going to read the book, read it. Skimming over chapters like “Cetology” has been a tradition for generations of students, but reading 90 percent of Moby-Dick is like running 23.5 miles of a marathon: you get all the exhaustion with none of the thrill of having done the thing. Worse, you don’t fully appreciate—in the Stockholm syndrome fashion described by Mark O’Connell—those passages in which Melville suddenly rewards you beyond all expectation, with a moment of offbeat pathos or a sentence that knocks you back in your chair:

For by this time, so spent was [the whale] by loss of blood, that he helplessly rolled away from the wreck he had made; lay panting on his side, impotently flapped with his stumped fin, then over and over slowly revolved like a waning world; turned up the white secrets of his belly; lay like a log, and died. (Ch. 81)

The vast swells of the omnipotent sea; the surging, hollow roar they made, as they rolled along the eight gunwales, like gigantic bowls in a boundless bowling-green; the brief suspended agony of the boat, as it would tip for an instant on the knife-like edge of the sharper waves, that almost seemed threatening to cut it in two; the sudden profound dip into the watery glens and hollows; the keen spurrings and goadings to gain the top of the opposite hill; the headlong, sled-like slide down its other side;—all these, with the cries of the headsmen and harpooneers, and the shuddering gasps of the oarsmen, with the wondrous sight of the ivory Pequod bearing down upon her boats with outstretched sails, like a wild hen after her screaming brood;—all this was thrilling. (Ch. 48)

And all of it is thrilling, at least in the aggregate. There will be times, reading Moby-Dick, when you’ll curse people like Philbrick and me for recommending it. But somewhere along the way you’ll start to admire Melville’s sheer stamina as an author—and your own as a reader. By the time you turn the last page, you’ll be a convert.