The Life and Death of Djuna Barnes, Gonzo "Greta Garbo of American Letters" 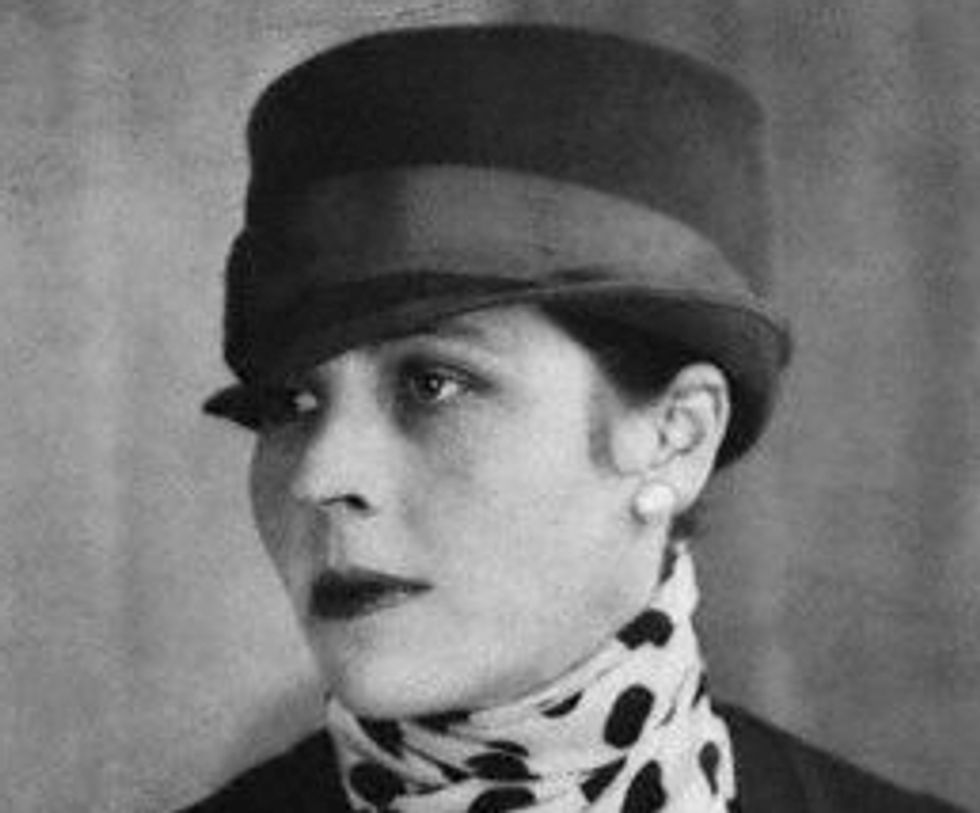 She died thirty years ago, the last of the English-language Modernists, plagued by bitterness and an apartment full of roaches. Noël Riley Fitch called her the “Garbo of American letters,” since unlike most of our literary recluses she hid herself away in the middle of Manhattan. The confinement of her later years was a stark reversal of her earlier wildness, in art and in the bohemian life of New York and Paris.

Her childhood was awful, a vintage specimen of American Weird. She was born in a log cabin to a polygamist family and had survived poverty, incest, rape, and a forced marriage by age nineteen. As an adult she was a poète maudit's poète maudit: druggy, alcoholic, depressive, bisexual, brilliant. She fell disastrously in love with an artist named Thelma Wood, lost her to a wealthier woman, and transfigured her in her masterpiece as the elusive Robin Vote.

Phantasmagorical and all but plotless, Nightwood flings itself madly upon the night, upon Wood, and upon the reader. Its sentences pomp along like palanquins and writhe like crucifixions. They puke, they sing. Their deliriums are frighteningly controlled:

Jenny leaning far over the table, Robin far back, her legs thrust under her, to balance the whole backward incline of the body, and Jenny so far forward that she had to catch her small legs in the back rung of the chair, ankle out and toe in, not to pitch forward on the table—thus they presented the two halves of a movement that had, as its sculpture, the beauty and the absurdity of a desire that is in flower but can have no burgeoning, unable to execute its destiny; a movement that can divulge neither caution nor daring, for the fundamental condition for completion was in neither of them; they were like Greek runners, with lifted feet but without the relief of the final command that would bring the feet down—eternally angry, eternally separated, in a cataleptic frozen gesture of abandon.

T. S. Eliot loved Nightwood so much that he shepherded its publication and wrote the introduction to the first edition. Dylan Thomas complimented it with his left hand by calling it “one of the three great prose books ever written by a woman” and with his right hand by stealing from it. (In a study forty years ago Gene Montague found traces of her prose sprinkled in his poems.) Her influence is like this—covert, oblique—because she has gained so much cachet in literary circles while gaining so few readers.

Nightwood’s Dr. Matthew-Mighty-grain-of-salt-Dante O’Connor, florid monologuist and transvestite, seems to have been a model (along with Captain Ahab) for Judge Holden in Blood Meridian. The difference is that Cormac McCarthy’s Judge is essentially Satan, whereas O’Connor is essentially Christ; they're only just on opposite sides of the border of madness. Robin Vote, who crazes her lover Nora with jealousy and lust, inspired Robin, Denise’s lover in Jonathan Franzen’s The Corrections—except that some vital principle was lost in the reincarnation. Franzen’s Robin is a luscious peach, “prêt à manger,” but Barnes’s is “an amputation that Nora could not renounce”; she is “the vision of an eland coming down an aisle of trees, chapleted with orange-blossoms and bridal veil, a hoof raised in the economy of fear.”

Barnes scorned fear. She once landed a job by marching into a newspaper office and announcing that they’d be fools not to hire her. She was a journalist, caricaturist, and savage satirist, the kohl-eyed godmother of gonzo. According to the Paris Review:

The phrase newspaper fiction was an invention of Barnes’s own. She, like Janet Malcolm today, was a believer in what might be called journalism’s observer effect, where the presence of someone watching, cataloging, and judging cannot but alter results. And so, finding that she cast a shadow on her observational path, Barnes duly recorded and printed it: an interview with Alfred Stieglitz sees her digressing with surprising candor on her own horror of life; she struggles to pay attention to Joyce and finds herself yelling at the playwright Donald Ogden Stewart for “rolling over and finding yourself famous,” before cutting the interview short with the declaration that she might like to die.

Famously, she also subjected herself to artificial feeding for the New York World Magazine in “How It Feels to Be Forcibly Fed,” undergoing the procedure performed, often fatally, on hunger-striking suffragettes.

“I was crying and striking my left hand against the predieu, and all the while Tiny O’ Toole was lying in a swoon. I said, ‘I have tried to seek, and I only find.’ I said, ‘It is I, my Lord, who know there’s beauty in any permanent mistake like me….So tell me, what is permanent of me, me or him?” And there I was in the empty, almost empty church, all the people’s troubles flickering in little lights all over the place. And I said, ‘This would be a fine world, Lord, if you could get everybody out of it.’ And there I was, holding Tiny, bending over and crying, asking the question until I forgot and went on crying, and I put Tiny away then, like a ruined bird, and went out of the place and walked looking at the stars that were twinkling, and I said, ‘Have I been simple like an animal, God, or have I been thinking?’”

Rereading Nightwood, I too need to walk and clear my head. I would have collapsed halfway through writing it, let alone leading the life that inspired it, but whether fueled by “pure rage” (as one biographer claimed) or preserved by her retreat into seclusion, Barnes survived to age ninety. The woman who once wanted to die in the middle of an interview ended up outliving all her famous peers. Nightwood itself, which turned seventy-five last year, seems assured of an even longer life—as though, more occult than obscure, it draws power from the shadows in which it hides.