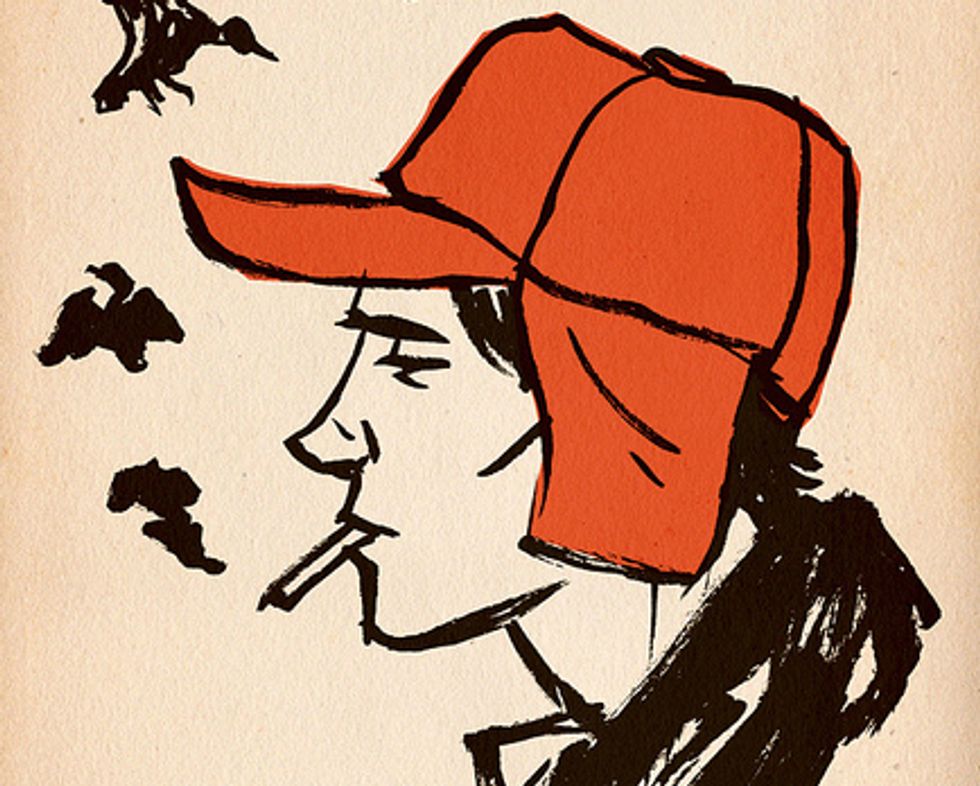 According to the New York Times, the second faction is gaining ground. In an oddly statistics-free trend piece, the paper reported in 2009 that The Catcher in the Rye has lost favor among teens: “what once seemed like courageous truth-telling now strikes many as ‘weird,’ ‘whiny’ and ‘immature.’” (No word on whether any wiseass added “phony.”)

Of course, some high schoolers will trash Hamlet if given the chance, but on this book you won’t find much consensus from the literati, either. Harold Bloom has branded Catcher a “period piece” but concedes Holden’s archetypal status. Norman Mailer called Salinger “the greatest mind ever to stay in prep school.” Where Joan Didion is skeptical about Holden’s pandering “relatability,” William Faulkner left us this grand tribute:

[Holden’s] tragedy was that when he attempted to enter the human race, there was no human race there. There was nothing for him to do save buzz, frantic and inviolate, inside the glass wall of his tumbler, until he either gave up or was himself, by himself, by his own frantic buzzing, destroyed.

Anecdotally, I’ve noticed a similar divide among bookish friends. The reason may be that Holden holds up a mirror to factors besides “taste”: class, cultural background, individual personality. Where some skilled readers see a flawed but sensitive young man, others have a hard time seeing anything but an entitled little twerp.

Still, an infuriating character is not necessarily a failed characterization. If Holden is the latter, we should be able to identify specific failures.

The case against him seems to turn on three main objections. The first is that his narrative voice is, in the Times’s phrase, “grating and dated.” The second is that his plight lacks genuine tragic stature. (As one student, quoted secondhand in the Times, put it: “I can’t really feel bad for this rich kid with a weekend free in New York City.”) The third is that he's too saintly (or holier-than-thou) to win our sympathies—that his conscientious alienation from the human race comes to look like its own form of prep-school snobbery.

Let me address each of these in turn. Like most of Salinger’s fiction, Catcher is a pure voice piece, and Holden’s teenage argot is so pronounced as to constitute almost a dialect. On rereading I find that Salinger does sometimes lean too hard on this effect. The constant “goddam”s, “whaddya”s, “lousy”s, and so on—not to mention the hedgings and repetitions (“in some ways,” “I mean,” “it really was”)—add up to an assault of tics that threatens to exhaust the reader’s patience. Then again, Twain sometimes goes overboard with dialect too. And I’ve never heard anyone claim that Salinger got his teenspeak wrong—that it wasn’t basically accurate for its time and place. So while we may convict Holden on this first charge, we shouldn’t hang him for it.

The second charge is potentially more damning. Prep school angst alone isn’t enough to ground a novel. Adolescent drinking, sexual fumbling, and academic failure would seem to be grist for a comic picaresque, but while Catcher can be very funny, its tragic intent is clear. So what, if anything, elevates Holden’s martyrdom to Faulknerian heights? The best answer I’ve read came from playwright Polly Stenham in a tribute to the recently deceased Salinger:

[Catcher] reads as a coming of age thing when you are young; when you get a bit older, it's about sexuality and being lost and later you see that it's about an epic breakdown following a death. But he's so light with that material—he dips it in a tiny bit and you have to really concentrate to see it.

The death she means is that of Holden’s younger brother Allie, and she's right that it’s the crucial background against which the whole story takes shape. Beneath the surface of its urban preppie setting, Catcher is not a portrait of rich-kid ennui but a portrait of grief, and should be judged accordingly. I personally find it a convincing portrait, full of eerie particulars—for example, Holden’s absurd fear of “disappearing” whenever he crosses a street. This is many things at once: a superstitious fear of death, a displaced suicidal impulse, the Raskolnikov-like sense of having cut himself off from everyone, and a dread that the integrity of his grief (against which everything else becomes “phony”) will disappear in the transition to adulthood.

Holden’s inability to save Allie from death fuels his desire to rescue innocence from anything that threatens it, including the corruptions of adult sexuality and money. It becomes, in fact, a puritanical impulse with which he wrestles: he lets fly with just about every swear word in the language except those having to do with sex. Famously, he erases the graffito “Fuck you” from walls where kids can see it—where, most likely, kids wrote it. This gesture should be paired with an earlier episode, in which he packs a snowball at his windowsill but can’t bear to throw it, lest he disturb the pristine whiteness below.

His tendency toward puritanism brings us to the last objection. Despite his reputation as a foul-mouthed rebel, the truth is that Holden often risks sounding sanctimonious. Unrepentant sinners sometimes work as literary characters, but saints never do. To be too good for the world is to be, by definition, too good for us.

I can’t deny that this is a pitfall to which Salinger is particularly vulnerable. Holden is a spiritual cousin to the Glass family, of whom John Updike once wrote, “Salinger loves the Glasses more than God loves them.” Seymour Glass especially (except in the short story “A Perfect Day for Bananafish”) is a genuine failure of characterization: impossibly good, impossibly wise. People who hate Holden may be reacting to a similar sense that we’re expected to love him beyond measure.

I would argue, though, that Holden remains flawed enough to keep him interesting. He is frequently, by his own admission, childish. (“Sleep tight, ya morons!” he yells as he leaves his dorm for good.) He can also be cowardly (as during his run-in with Maurice the pimp), needy (he’s literature’s most notorious drunk dialer), and misanthropic (“I’m sort of glad they’ve got the atomic bomb invented. If there’s ever another war, I’m going to sit right the hell on top of it”). In other words, he's believably sixteen. And however hard Salinger tried to fulfill it as a man, as an author he shows Holden’s daydream of monkish seclusion—of living alone and posing as a deaf-mute—to be misguided. Exiled in a mental health facility at the end of the novel, Holden finds himself “missing everybody.”

Within the confines of the book, in other words, Salinger is more or less in control of his ironies. Holden is not a saint, but he is certainly a writer. (He blows off every class except English, fantasizes about talking with Thomas Hardy, and so on.) That’s why, tiring though his voice can be, I can never dismiss the kid. Writers of any kind secretly know that they, too, are childish, irritating, self-involved—but always desperate to stay on the side of the angels. If well-adjusted people close the covers on Holden in exasperation, I can’t blame them; but I know I judge him at my peril.