Darwinian differences: How the theory of evolution viewed women as inferior

In line with his own ingrained assumptions, the standard ones of Victorian England, Darwin maintained that female inferiority is an inescapable consequence of nature. 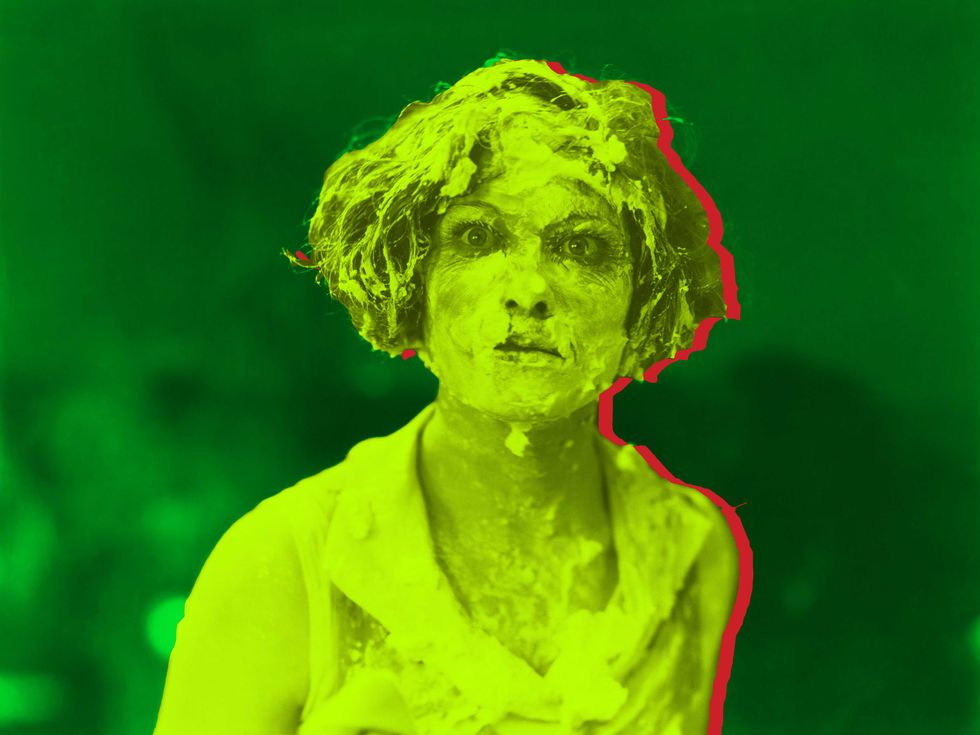 A woman with pie on her face. (Shutterstock/Big Think)

Charles Darwin exerted an enormous influence on attitudes towards women because his model of evolution provided an apparently rational justification of conventional Victorian beliefs. His basic model involves two stages, each repeated sporadically time after time. First an offspring happens to appear that is slightly different from its parents; next, that difference gives the offspring an advantage in the battle for survival in its immediate environment. Eventually, after repeated adaptations, a new species emerges that is better suited—more fit—for its surroundings. Maintaining that men and women had diverged during evolutionary processes taking place over millennia, Darwin drove a wedge between the two halves of the human race.

Darwin was by no means the first person to write about evolution; he was not even the first person to write about human evolution. His own grandfather Erasmus, who died before Charles was born, had published a long poem about the gradual development of living organisms from an initial ‘ens’ (living entity) up through insects, fish, mammals, and on up to human beings. Charles Darwin’s innovation was natural selection as an agent of evolution. Although his model is now celebrated as a major scientific breakthrough, it aroused great controversy and was never fully accepted in its original form. Arguments still raged in the early twentieth century, and it was not until the 1930s that several approaches were melded together into a package resembling modern Darwinism.

Darwin’s Victorian critics promptly pounced on several shortcomings. Most obviously, he had no way to prove that he was right. Despite piling up example after example in support of his ideas, Darwin could not explain why one generation should possess a new characteristic. What biological mechanism enabled two parents with identical flippers to produce a baby with flippers of a different style? He had plenty of circumstantial evidence, but no convincing explanation.He could not even point to an instance of evolution that was actually happening. Modern experimenters can simulate evolutionary pressures in a laboratory by breeding short-lived organisms such as beetles, but Darwin’s system rested on hypotheses. His book is peppered with rhetorical question such as ‘might it not be reasonable to suppose that . . . ?’ Very persuasive, but not the stuff of scientific proof.

Brooding for years over a theory he knew would be contentious, Darwin struggled to explain how some features might have conferred an advantage for survival. Human eyes, for example, were very problematic: how could such a complicated organ possibly have emerged in stages? Just thinking about it made him go cold all over, he told a friend. Even worse, the ‘sight of a feather in a peacock’s tail, whenever I gaze at it, makes me sick!’ How could it possibly be advantageous for a male bird to carry such a cumbersome tail? And why was the female so dowdy? To resolve this conundrum, he argued that the male’s ostentatious display would allow him to pick the strongest and most fertile hens, a reproductive advantage that would outweigh the physical hindrance.

In 1859, Charles Darwin self-protectively refrained from mentioning human beings in On the Origin of Species, but by 1871 he felt ready to publish The Descent of Man, with its significant subtitle Selection in Relation to Sex. Moving from peacocks to people, Darwin claimed that equality was scientifically impossible. In line with his own ingrained assumptions, the standard ones of Victorian England, Darwin maintained that female inferiority is an inescapable consequence of nature. Men are cleverer, ran his argument, because over the millennia, their brains have become honed by chasing animals and defending their families. ‘The chief distinction in the intellectual powers of the two sexes,’ he wrote, ‘is shown by man’s attaining to a higher eminence in whatever he takes up, than can woman—whether requiring deep thought, reason, or imagination, or merely the use of the senses or the hands.’ To attract a powerful man, he explained, women compete by dressing elaborately. His admirers backed him up. A fashionable woman, commented H. G. Wells, surpassed even the extravagance of peacocks by providing ‘an unwholesome stimulant’ for men.

Darwinian evolution implies a natural hierarchy, and was often interpreted to reinforce Victorian views on ethnicity as well as on gender. According to Darwin, just as lower creatures had evolved into higher ones, so too primitive races had evolved into more civilized ones. As these processes took place, the sexes diverged further and further, so that—he argued—male brains are superior to female ones; correspondingly, female characteristics such as intuition, empathy, and sensitivity are inescapable because they are biologically imprinted. For some of his followers, this meant that women are closer to animals and non-Europeans. As the sexologist Havelock Ellis put it, women are ‘more curved forwards than the men’, rather like apes and the ‘savage races’.

30th September 1871: English naturalist Charles Darwin (1809 - 1882) propped up on two cushions and in the wheeled chair he used for propelling himself round his work room. Vanity Fair - No 152 - Men of the Day No 33 - 'Natural Selection' - pub. 1871 Original Artwork: Cartoon by 'Coide'. (Photo by Hulton Archive/Getty Images)

Conveniently, this scientific explanation supported domination not only over women at home, but also over the people of the British Empire. Although women everywhere were inferior, the problem was greater among the civilized races—so ran the argument—because divergence between the sexes had increased during evolution. Speaking in the House of Commons, an opponent of woman’s suffrage argued that

An adult white woman differs far more from a white man than a negress or pigmy woman from her equivalent male. The education, the mental disposition of a white or Asiatic woman reeks of sex; her modesty, her decorum, is not to ignore sex but to refine and put a point to it; her costume is clamorous with the distinctive elements of her form.

These were not the words of the MP himself: he was quoting H. G. Wells, who reached wide audiences all over the country.

Measurements of brain weights and skull sizes seemed to corroborate views that white men (especially English ones) were the most highly evolved—that is, the best!—form of humanity. Expressing it the other way round, a London chemistry professor pronounced that because women were lower down the evolutionary scale than men, ‘Education can do little to modify her nature’. Even those sympathetic to science for women argued that they were better ‘fitted’ (that is, suited) to subjects such as chemistry or botany that required ‘a capacity for noting details—patience and delicacy’. At the beginning of the twentieth century, noted a female physician bitterly, ‘men tended to divide women into two camps. (1) Clever women and pretty women. (2) Good women and bad women.’ Presumably speaking from experience, she explained that in public debates, women often found themselves in a lose-lose situation. If they spoke in an appropriately feminine way, they were accused of being subjective and emotional—but if they argued rationally, they were warned not to overtax themselves, lest they endanger their health and their sanity.

However, women could take advantage of ambiguities within Darwinism. As originally formulated, evolution by natural selection is governed by chance rather than design, whereas Darwin’s later theory of sexual selection suggests that people can direct evolution by choosing desirable partners. Striving to refute biological inevitability, suffragists denied that they were destined through evolution for marriage and motherhood. By placing the blame on social conditioning, they insisted that change was possible, that women could control the course of evolution by altering their behaviour. Cicely Hamilton, an outspoken journalist and playwright, argued that women had been schooled into submission so that they could fulfill their role in what she described as the economic trade-off known as marriage. In order to get her man, she explained, a woman learned to exaggerate the characteristics of passivity and stupidity that make her attractive as a bride: ‘women have been trained to be unintelligent breeding-machines until they have become unintelligent breeding-machines.’ But how short-sighted of men to adopt that strategy—suppressing women’s intelligence would result in them suckling fools! Women needed to change their tactics, but she regretted that time would be needed to undo the damage: ‘Think of the years, the generations, that women have been told they must not think! What wonder then that they make some mistakes when they begin to use the rusty instrument.’ Another way of vindicating the suffragist cause was to claim that the modern woman occupied the next step up the evolutionary ladder. According to this argument, whereas men had long ago succumbed to animality by manifesting excess sexual desire, women were the civilizing influence who had clung to higher standards and could guide the future story of evolution by making the right choice of partner. The Woman’s Freedom League suggested that in an industrial world, men were no longer adapted for superiority: technology in the home was a liberating force that would enable women to achieve their natural destiny of evolving still further. Modern inventions, the League argued, were making masculine strength redundant, so that large muscles would no longer be sufficient for attracting a choosy bride.

In this suffragist version of evolution, women would slowly gain ascendancy by educating society towards a higher state of morality. Adopting Darwinian terminology, campaigners maintained that ‘the woman of political and social activity will be different from the domestic woman . . . just as palaeolithic man differs from his neolithic brother’. Instead of being doll-like, the modern woman ‘is now energetic and assured; not less beautiful, only differently beautiful’. To undermine the power of conventional arguments, they enlisted scientific vocabulary to castigate opponents as social dinosaurs. One cartoonist labelled an imaginary prehistoric creature the ‘Antysuffragyst or Prejudicidon’. Hampered by a tiny brain and sight so defective that it could not see past the end of its nose, it fed voraciously off the stupefying Humbugwort as it launched meandering attacks on its enemy, the female Justiceidon.

Adapted from A Lab of One's Own. Copywright © Patricia Fara 2018 and published by Oxford University Press. All rights reserved.