This post originally appeared on the Newton blog on RealClearScience. Read the original here.

Venus has always captured the attention of humanity. Of all the objects that adorn our night sky, it’s the brightest, excluding the Moon.

Peering through his telescope in the early 17th century, Italian astronomer Galileo Galilei found Venus to be almost featureless. What he saw was Venus’ defining, impenetrable layer of thick clouds, obscuring the surface and shrouding the planet in mystery, a mystery quite open to speculation. As summarized by Carl Sagan in Cosmos, one of the most outlandish, yet surprisingly common lines of speculative reasoning went a little like this:

The original observation was effectively a lack of an observation. The conclusion was dinosaurs.

For decades and decades, this faulty logic played out harmlessly, roiling imaginations and powering the pens of science fiction writers. Published in 1895, Gustavus W. Pope’s Journey to Venus weaves the tale of a fantastical trek to Earth’s sister planet, placing Lieutenant Frederick Hamilton and his companion, the Martian princess Suhlamia, in a lush Venutian landscape inhabited by vicious, dinosaur-like beasts. “Exciting adventures, hairbreadth escapes, and perilous vicissitudes” ensue, according to the book’s publisher.

In 1922, fantasies of a wet, swampy Venus started to fade. Astronomers analyzing the visible light reflected from the planet’s atmosphere found no signs of the wavelengths which would have been given off by oxygen or water. Venus, they proposed, may instead be barren and dusty, a desert-like place.

Venus is, of course, named after the Roman goddess of love and beauty, and this new, scientifically modern depiction wasn’t nearly romantic or poetic enough for novelists. So what did many of them do? They simply ignored it. Even as late as the 1950s, writers were still describing the planet as wet and rainy. Ray Bradbury’s The Long Rain told the story of four men who crash-landed on the planet and were subsequently driven insane by the unceasing precipitation.

“It was a hard rain, a perpetual rain,” Bradbury wrote, “a sweating and steaming rain; it was a mizzle, a downpour, a fountain, a whipping in the eyes, an undertow at the ankles; it was a rain to drown all rains and the memory of rains.” 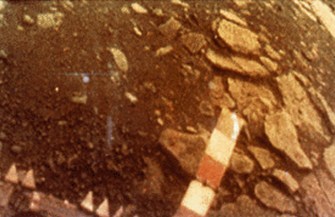 We now conclusively know that there’s no rain on Venus, not even a drizzle. The planet’s sizzling environment, sporting temperatures in excess of 800 degrees Fahrenheit, vaporized liquid water long ago. With this knowledge, we can revise the aforementioned line of reasoning to reach a more correct conclusion:

There is no liquid water. Therefore, there are no ferns. Therefore, there are no dinosaurs.
(Images: 1. Venus Clouds via ESA/MPS/DLR/IDA 2. Venera 13 on Venus via NASA History Office)
Related
13.8
What kind of intelligence is artificial intelligence?
The initial goal of AI was to create machines that think like humans. But that is not what happened at all.
The Present
What’s effective altruism? A philosopher explains
Some effective altruists “earn to give” — they make as much money as they can and then donate most of it to charities.
Sponsored
How to avoid family fights about money
No family is immune to money conflicts, no matter how much they love each other. Here’s what to look out for.
L&D strategy
Best practices for a needs analysis [Templates included]
Conducting a thorough needs analysis requires care, curiosity, and open-mindedness.
Neuropsych
Memory and the benefits of forgetting
Forgetfulness isn’t always a “glitch” in our memories; it can be a tool to help us make sense of the present and plan for the future.
Up Next
The Art of the Five-Minute Favor
You should be willing to do something that will take 5 minutes or less for anybody. This simple notion is not only important for the purpose of being altruistic. It turns out that givers get good karma.