Modern technology has done nothing to make humans more humble. Quite the contrary. So secure are we in our confidence of our superiority to ancient cultures that discoveries like the Baghdad battery or the Antikythera mechanism routinely bring reactions of disbelief. The ancients couldn’t have harnessed electricity. They couldn’t have had analog computers. They couldn’t have had access to precision machine tools (and yet how else do we explain the precision-cut stones of Puma Punku?). So dismissive are we of ancient technology, in fact, that many people would rather believe aliens had a role in these things than believe “primitive societies” could have done the things they obviously did, on their own.

We don’t know how or why, but starting around 10,000 years ago (which is to say at the end of the last ice age), cultures around the world began erecting elaborate monolithic structures, many of which we would have a hard time recreating today. If we count portal tombs or dolmen, we’re talking about many tens of thousands of structures made of heavy stone, around the world. (There are reportedly 30,000 dolmen in Korea alone.) How did “primitive peoples” accomplish these feats without cranes, motorized machinery, or iron tools?

How did Stone Age peoples transport, and then raise, huge stones? For example, how did the early peoples of what is now England come to build Stonehenge? How did they transport the 30-ton sarsens and stand them upright? How did they raise the (mortised) 9-ton lintels to place atop the sarsens?

Our cluelessness on these matters is probably largely a reflection of the climate in which we live—literally. We live in warm times. Neolithic structures were built in cold times, and in cold places. We would do well to remember that as little as 15,000 years ago, half of Europe was covered over with kilometer-thick ice. Neolithic humans were (and were descended from) people who knew cold weather well. They were infinitely more familiar with ice and its properties than we are today.

The sight of a large stone floating on an ice shelf in a river would not have been unusual to the peoples who built Stonehenge. It seems natural to assume they would have moved cut stones the same way: on slabs of ice in waterways. Failing that, if there were large tracts of flat ice, at the time, between the Marlborough Downs (where the Stonehenge megaliths were quarried) and Stonehenge, perhaps the huge sarsens, affixed with sails, transported themselves, the way “sailing stones” of Death Valley, California (weighing up to a third of a ton) move sizable distances on their own. Or perhaps ice technology was harnessed in some other way to transport the stones.

It seems certain (to me, at least) that ice technology was used to heave the stones into place. I use the word “heave” deliberately, for the ancients, having lived through an ice age, would certainly have been well familiar with the ability of what we now call frost heave to move (and crack) enormous stones. They surely also buried many objects and noted the different rates at which soil rises depending on how it’s compacted and what’s buried beneath it. They would have known that water expands when it freezes, and that the power of expanding/freezing water is unstoppable.

The first scientific studies of frost heave (the pioneering work of Gunnar Beskow and Stephen Taber) were undertaken only 80 years ago. One of the earliest findings was that, in Taber’s words, “Heaving is often greater than can be explained by expansion.” That is, water expands only 9% when it freezes, but soil rises a great deal more. 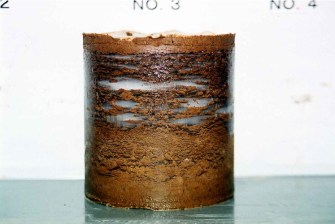 When soil heaves, it does so because of the accumulation of “needle ice,” crystals that grow in the direction of heat loss (usually vertically). For soil to frost-heave, it needs to contain particles of clay. (Sand particles touch one another, whereas particles of clay are always separated by a water layer; this is why sandy soils do not heave.) The clay allows colder water (which is less dense than warm water, when water is between zero and four degrees C) to “wick up” toward accreting ice, which ultimately forms “ice lenses” in the soil (see photo; note the layers of ice). As the ice lenses expand, the soil begins to bulge and lift, often to a lift height as much as 60% of the depth of the freeze zone.

When freezing soil heaves, it does so with an almost unimaginable force. Taber measured forces of 700 psi (4760 kPa) and proved a theoretical upper limit of 2100 psi, enough to lift buildings, crack gigantic concrete slab floors, shift tall trees—far more force than would be needed to lift the stones of Stonehenge (whose footprint is well under 10 psi).

The soils of the Stonehenge area are, of course, clay-bearing, and we know that the Beakers (and others who lived near Stonehenge and worked on the project) deposited large amounts of deliberately shattered pottery (and burned bone) in holes stationed around the interior of Stonehenge. The “henge” itself (the earth-walled ditch around Stonehenge that gives it its name) probably also played a role in raising the stones. With proper soil preparation, the soil would have heaved as much as 60 centimeters per freeze, allowing the 4-meter-high sarsens to be raised into place in a period of well under a decade (although hewing and transporting the stones doubtless took longer). Perhaps the ancients also knew ways to facilitate the growth of needle ice, by using rotted upright timbers in the ground as a place for vertical ice to form. Perhaps they used the giant stones themselves as heat sinks, pouring subfreezing salt water over the rock to encourage the expansion of ice lenses in the soil beneath. 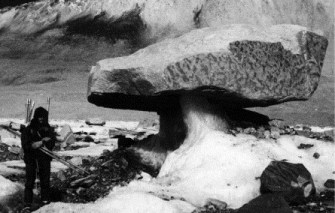 Instead of investigating the possible engineering role of frost heave, modern-day archaeologists and anthropologists speculate endlessly (and fruitlessly) on the supposed ritualistic significance of the 50,000+ human (and countless animal) bone fragments, and endless pottery sherds, found buried in pits around Stonehenge. The attitude of modern researchers is evident in the writings of Pearson et al. in the Journal of Material Culture, 11 (2006), where (p. 242), after commenting on the unweathered condition of pottery and bone placed in “postholes,” they note:

The depressions in the top of each posthole can now be interpreted as pits dug once the respective posts had decayed. The artefacts and bones within these pits have long been considered as ritually structured depositions (Richards and Thomas, 1984) and this new interpretation suggests that the leaving of the posts to decay was itself deliberate and intentional, a process of rotting whose culmination was marked by the digging of a pit to deposit offerings as a ‘closing’ ritual.

In other words, what was obviously an engineering site designed to facilitate the erection of precisely positioned stones is viewed (in keeping with modern techno-arrogance) as a place where primitive supplicants came to “deposit offerings.” Sadly, modern society’s obsession with academic specialization precludes anthropologists from recognizing an engineering site when they see one. Rotted timbers are not places of worship; they’re places of needle-ice growth. Packed soil containing unweathered (and in many instances that we know of, deliberately broken) pieces of clay pottery and burnt bone is not evidence of ancient religious practice but of ancient engineering practice.

Hopefully the day will come when archaeologists and anthropologists and historians will shed their techno-arrogance and begin to see Stonehenge and other megalithic sites for what they are: places of knowledge—havens of engineering acumen; monuments to ingenuity. Ingenuity of a kind now apparently lost.

Human beings are fallible, politicians perhaps most of all, and Republicans ought to know this.