When Edward Jenner proposed to the parents of 8 year-old James Phipps the risky idea that rubbing some stuff from sick cows onto the young lad might protect him from small pox, James’ parents faced a choice. It was 1794 and smallpox was ravaging the British population, and in that emotional environment, the fear of smallpox won out over the frightening idea Jenner was proposing.

With no data or experience to go on, James’ parents could only rely on their emotions and instincts. Since then, we’ve learned an immense amount about vaccination, firmly establishing that the benefits of vaccines far outweigh their real but minimal risks. But those facts don’t change the reality that we consider whether to vaccinate in a psychological choice environment shaped far more by our feelings than the facts alone. The modern vaccination program offers two clarion examples of the emotional nature of our risk perception system, and how it can sometimes get us into trouble.

Despite lots of alarming news stories about declining childhood vaccination rates, in general those rates remain high. The vast majority of parents worry more about the diseases than the vaccines that prevent them, or trust their health care providers and just follow their advice. (A full list of rates per disease, per state, are in this CDC chart.)

But small groups in some local areas either refuse to vaccinate their children at all (less than 1% of children overall in the U.S.), or choose not to vaccinate or to delay vaccination against some diseases. For example, in 17 states, local pockets of vaccine hesitancy have dropped the statewide average rates for measles/mumps/rubella vaccination below the 90% target.

The facts about the risks of diseases and vaccines are the same for the tiny group of vaccine refusers or the slightly larger group of those hesitant about the recommend schedule, as they are for the general public. But the psychological choice environment in which the ‘refusers/hesitants’ are making vaccine decisions is different. Some of those people don’t like the government telling them what to do. Some have particularly high fears of human-made risks, like vaccines. Some live in communities that place high priority on micro-level decision making about parenting. These different emotional risk perception factors lead them to worry more about the vaccines than the diseases, or mistrust the public health system that recommends vaccines, or the pharmaceutical industry that produces them.

As a result of those emotional differences, these people expose their kids and themselves and the public to far greater risk than the minimal danger of vaccines. But these choices are neither irrational, nor ‘science denialism’, as some academics and doctors and pundits dismissively label them. These choices are based on people’s legitimate and valid feelings, emotions and instincts we all use to assess the facts and gauge potential risk. The feelings and values and life experiences and circumstances of the refusers and hesitants just lead them to see the same facts about vaccines through different emotional lenses than most people do.

Childhood vaccination is getting most of the attention from the news media that now raises alarms about declining vaccination rates but just a few years ago was full of scary stories about the risks of vaccines, helping trigger the very decline about which they are now raising concern. But another form of vaccination offers a lesson about the potential danger of our emotion-based risk perception system; the regular vaccination for seasonal flu, which is now recommended for everyone six months old and up. 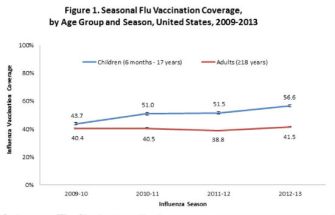 According to the CDC, influenza kills 1,532 Americans a year directly, and contributes to the deaths of between 3,000 and 49,000. The number of people unvaccinated against the flu dwarfs the number of un- or partially-vaccinated kids. And the numbers of people who get sick or die from influenza, many of whom are young children with still-developing immune systems, dwarfs the number of people who get sick or die because childhood vaccination rates run low in some areas. Between the two, the low vaccination rates for influenza pose a far greater threat to public health in terms of illness and death. Talk about “irrational”!

But the psychological choice environment for whether to get a flu shot is different than the emotional factors influencing concerns about childhood vaccination. When risks to kids are involved, fears almost always run higher. So does media coverage, which is why we hear more about the childhood vaccine issue, coverage which magnifies the fear. On the other hand, flu is familiar, and familiarity with any risk reduces concern. A flu shot is always available for most of us, so we think that we can always go get one, a reassuring sense of control that seduces some of us into not worrying enough to get the shot in the first place. And unless you’ve had a bad case of influenza, you’re like most people; you don’t think getting it is that bad…and when we don’t sense a lot of suffering from a risk, we don’t worry about it as much. (Trust me on this one. You REALLY SUFFER, for weeks or more, when you get a bad case of influenza, as millions do each year.)

We worry more about new UNfamiliar flu, or when there might be vaccine shortages that threaten our sense of control. But in normal times, far fewer of us get flu shots than should.

Two vaccine issues. Two different sets of numbers, two different sets of emotional factors that cause some of us worry more than we need to, or less than we should. But together, these examples illustrate a single phenomenon; the Risk Perception Gap, the risk we face when our fears don’t match the facts. These examples help make the case that we need to recognize how powerfully the psychological choice environment shapes our judgments and behaviors, and account for those emotional factors as we try to make healthier choices for ourselves and for society.

Related
Starts With A Bang
NASA’s Habitable Worlds Observatory to finally answer the epic question: “Are we alone?”
NASA has finally chosen which flagship mission, like Hubble and JWST, will launch in ~2040. Detecting alien life is now a reachable goal.
Health
The scientific highs and lows of cannibinoids
Hundreds of these cannabis-related chemicals now exist, both natural and synthetic, inspiring researchers in search of medical breakthroughs.
Strange Maps
The horrors of World War II air war, in one stark map
This graph shows how badly German cities were hit by Allied bombing raids.
Hard Science
Subatomic ghosts shed new light on the structure of protons
A Fermilab study confirms decades-old measurements regarding the size and structure of protons.
The Present
The Taoist philosophy behind Alibaba, China’s e-commerce giant
Alibaba has played a key role in China’s meteoric economic rise.
Up Next
Technology & Innovation
Controlling Exposure to Light Will Help You Beat Jet Lag
Your body takes a lot of cues from exposure to light and dark. If you’re jumping multiple timezones in one trip, try to control your exposure for the first few days in order to adapt.