Over the past century a war has been fought in universities around the world which has resulted in countless bottles of red ink spilled over students’ work, in the form of underlined words accompanied with the words “passive voice” hastily scrawled in the margin. Only a few months ago I inadvertently found myself a foot soldier in this war. When completing Stanford University’s online science writing course, based on what I had learned I penned a piece on three terrible academic habits which included using the passive voice when the active voice could better be used. I received an interesting response from a reader (Christel de Bruijn), pointing to how the passive voice is incredibly poorly understood – with differing definitions across dictionaries and differing accounts of what is good or bad use. This intrigued me, I am no linguist but I do have a passion for good writing. Could it really be true that nearly every guide to good writing is wrong? 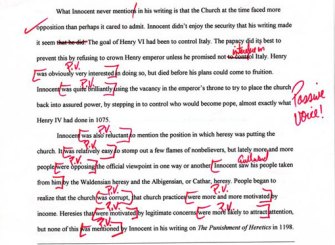 The passive voice is interesting because of the gaping chasm between theory and practice. Nearly everybody says not to do it, but nearly everybody does it. Stanford’s free online science writing course advises against the passive, as do journals such as Nature and Science amongst countless others. Even George Orwell wrote: “Never use the passive where you can use the active”. But this advice is not universal. The rather aptly named Overthinking It blog last year offered a “bounty” of $100 for “the first person who can find a journal that explicitly requires authors to write in the passive voice”, the prize was won within two days. In fact, there are a few: ICES Journal of Marine Science, Clinical Oncology and Cancer Research and the Journal of Animal Ecology. The American Meteorological Society used to, but doesn’t any more – but weirdly, advises against the first person, which makes avoiding the passive somewhat difficult to say the least.

So it seems the debate is somewhat nuanced. Perhaps “the problem isn’t with the passive voice per se, it’s that scientists don’t use it well”, the view presented by Duke’s science writing resource which provides a list of arguments both for and against the passive voice. It’s fair to say that the practice of always using the passive voice – as some scientists may be fond of, is now widely frowned upon. The passive it seems, could be said to be somewhat out of fashion – but whether its use is good or bad – that’s not the open and shut case we might have been led to believe.

Some linguists have become really quite upset about misunderstandings regarding the passive. Edinburgh professor of linguistics Geoffrey Pullum for example describes criticisms of the passive by people who “have gone crazy trying to find deviousness in every passive, every intransitive, every nominalization, every kind of sentence that doesn’t directly and plonkingly say that Colonel Mustard killed Mr Boddy in the library with the dagger”. In post after post Pullum tracks case, after case, after case of false “passive allegations”, it’s surprisingly entertaining reading. Pullum even takes on the bastion of Queen’s English, the BBC. Writing about the BBC News Styleguide:

“Where to begin deconstructing this tosh?”

In a new paper to be published in Language and Communication, Pullum describes the problem as:

“a strange cultural trend emerging in the 20th century among language mavens, writing tutors, and usage advisers. Unneeded warnings against sentences that have nothing wrong with them are handed out by people who actually don’t know how to identify instances of what they are warning against, and the people they aim to educate or intimidate don’t know enough grammar to reject the nonsense they are offered. The blind warning the blind about a nonexistent danger.”

A damning critique. Pullum goes for the jugular slating even “the section headed ‘Use the active voice’ in William Strunk’s original 1918 edition of America’s most famous book on how to write, The Elements of Style of which Pullum writes:

“If Strunk wanted to explain why passives are dispreferred relative to their active counterparts, he should at least have started with a passive that stood some chance of being sensibly used.”

Pullum goes on to slam everything from the Canadian Press Stylebook to a NATO commander, to authors of pieces published in Business Week, The Irish Times, The Washington Post and the New Yorker, amongst countless others. Not even a “UK government publication on literacy” escapes Pullum’s criticism. In every case, Pullum alleges, the authors criticise the passive in cases where they are not actually even talking about the passive. Pullum cites these and dozens more examples as “clear evidence that the state of the general public’s education regarding the notion ‘passive voice’ is nothing short of disastrous even when we consider people like professional writers, journalists, and authors of usage guides”.

Pullum proceeds to provide examples where the passive voice is actually used perfectly inoffensively in the very same works that attack the passive voice. Pullum calls out the introduction to a recent revision of Elements of Style for using the passive voice and amusingly notes that a Microsoft Word template for papers in APA style says “The active voice, rather than passive voice, should be used in your writing” – a sentence resoundingly written in the passive voice – with not a hint of irony. According to Pullum, the works of George Orwell (who remember penned the words “Never use the passive where you can use the active”) include “more than one and a half times as many passives as typical writers”. Pullum concludes: “they would not dream of taking their own assertions about the passive seriously. Nor should we, I submit… Even if they managed to follow the advice rigorously (which they can hardly do if it is not clear to them what a passive is), it would usually not improve their writing one whit. It would certainly make them write less like great writers of the past—and more like a little child.”

It seems clear that different people in fact mean many different things when they talk about the passive. An interesting explanation for what might be going on was posted on the collaborative Language Log blog by professor of linguistics Mark Liberman:

“I’m afraid that the traditional sense of passive voice has died after a long illness. It has ceased to be; it’s expired and gone to meet its maker, kicked the bucket, shuffled off this mortal coil, rung down the curtain and joined the choir invisible. It’s an ex-grammatical term. Its ghost walks in the linguistics literature and in the usage of a few exceptionally old-fashioned intellectuals. For everyone else, what passive voice now means is “construction that is vague as to agency”.

If you can get over the stumbling block of the drastically differing definitions of the passive, you’ll find there has actually been a staggering amount of debate as to whether the passive is the evil bogeyman it has been made out to be. This is the title of an entire 177 page thesis on the question (if you still care):

It seems that many of the classic arguments against the passive are founded (if on anything at all) on research that may have been poorly conducted and may not be generalisable. Influential studies have been described as involving awkward phrases that are “unlikely to be used in English speech and writing”. The thesis I cited above begins with the following quote – I’m beginning to see their point:

In the end, the matter seems to be something of an issue of taste, interesting research continues to be been done, but the findings remain unremarkable.

Regardless of how we define writing habits and for a moment forgetting whether the recommendations we are reading are based in evidence, it’s interesting to consider which ways of writing seem to work well intuitively (as a writer, my curiosity may be getting the better of me, so if I’m boring you, do stop reading). A closely related topic is “burying the verb” – turning the main verb into a noun and often placing it at the end rather than the beginning of the sentence. This can make a sentence sound academic but some say, makes reading a sentence more cognitively taxing and is frowned upon by major journals – though again, actual hard evidence seems to be lacking. Nature’s guide to English communication for scientists gives the following example: “The catalyst produced a significant increase in conversion rate.” should instead be “The catalyst increased the conversion rate significantly”. Duke University’s class in scientific writing gives these examples: 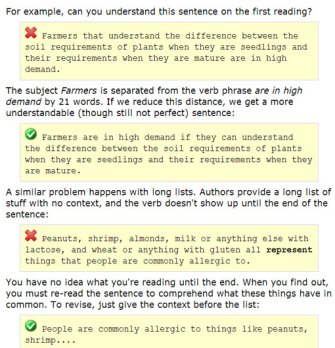 Do you find one or the other more cognitively taxing? Perhaps? Perhaps not. It’s worth thinking about how we can change our writing to make it easier to understand – but it seems this must be a continuous process. We might want to think carefully before we swallow any blanket rule, language doesn’t like rules and much of the advice on how to write well is conflicted.

As a footnote, I find it curious that placing the verb at the end of the sentence is precisely what makes Yoda’s speech sound so bizarre, a phenomenon known as Yoda’s Syntax. Just for fun, you can convert your own writing into Yodish using Yoda’s Syntax Speech Generator. Also check out the video below, in which Yoda’s speech is dubbed with proper syntax, making his words sound somewhat less profound:

Perhaps we should just try not to sound like Yoda. But who knows. Maybe Yoda was on to something.

Binary black holes eventually inspiral and merge. That’s why the OJ 287 system is destined for the most energetic event in history.
Up Next
Starts With A Bang

Image credit: official Fruit Ninja website, via http://fruitninja.com/. The best cinematic live-action adaptation of one of the silliest, most addictive mobile games I’ve ever seen! “My name is Robert and I […]