You’d think someone, at some point, would ask why so much money has been allocated to cancer research over the years, with so little impact on cancer mortality. After almost a century, cancer is still the No. 2 cause of death in the U.S.  Why?

Cancer research is important and should, of course, go on. But let’s not kid ourselves that it’s been cost-effective, because by almost any definition, it hasn’t been. Since President Nixon declared a War on Cancer in 1971, we’ve dumped $500 billion into the conflict—and the cancer death rate has hardly budged. 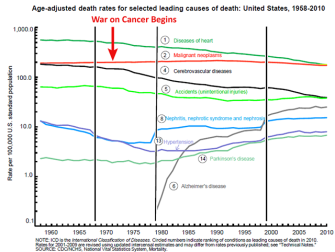 I use the word “cancer” as if it’s one disease. It isn’t, of course. Like “heart disease,” cancer is actually a diverse assortment of horrors. But it’s customary to count it as one disease in discussions of mortality in this country, so that we can point at it and say “Cancer is the Number Two cause of death in America,” and then presidents can declare war on it, $10 billion a year in taxpayers’ money can be set aside for research on it (approximately $500 billion in 2012 dollars spent since Nixon declared war) so that a $50-billion-a-year commercial industry of toxic therapies (some of which cost patients $10,000 a month) can be built around it, and meanwhile irrationally exuberant futurists can talk of achievable immortality in our lifetime (with arguments that don’t even come close to passing the straight-face test) when there’s no cancer cure in sight.

It might do exuberant futurists some good to spend a little time pondering the fact that roughly $20,000 in anti-cancer research money has been spent for every single person in the U.S. who has died of cancer in the last 40 years; and yet cancer is still the No. 2 cause of death in America; and after it’s gone, after it’s cured once and for all, this No. 2 Cause of Death, we will have extended human life a grand total of (drum roll, please) a whopping 3.3 years (loud cymbal-crash).

If you’re wondering where I got the “3.3 years” figure, it comes straight from the U.S. Decennial Life Tables for 1989-91 (U.S. Dept. of Health and Human Services, Centers for Disease Control and Prevention, National Center for Health Statistics, Volume 1, Number 4).

I’m not suggesting that all research needs to be cost-justified. Cancer research needs to go on, regardless of whether cures are found. But if the goal is to help people live longer, there are more cost-effective ways of getting there than throwing half a trillion dollars (in 40+ years) at cancer research. One thing the government could do is give every smoker who wants one a free e-cigaret. (Lung cancer accounts for 20% of Medicare’s $10 billion/yr cancer payout.) Another high-impact measure would be to give every American who wants it a free yearly personal allotment of mouthwash, toothpaste, and toothbrushes. (Periodontal disease and edentulous status are serious risk factors for cardiovascular disease, the No. 1 cause of death in the U.S.) The point is, not every worthwhile public health initiative has to involve a multi-hundred-billion-dollar War on Something.

The Netflix show about a Birmingham crime family and their personal demons concluded earlier this month.
Up Next
Personal Growth

Is “To Thine Own Self Be True” Actually Good Advice?