The National Climate Assessment released today by the White House is a masterful piece of science and risk communication Susan Joy Hassol, Senior Science Writer, who turned massive contributions from hundreds of scientists into an accessible, persuasive report that will play an important role in getting the U.S. to act on climate change. deserves great credit.

Will the report raise public concern about climate change enough to produce the political mandate for action that so many think is necessary? Probably not. But will it help leaders take some of the actions they need to take even without that mandate? Absolutely.

The language of the report is clear, accessible to the average reader. Facts are well-explained. The supporting evidence behind those facts is provided, simplified for the average reader but not overly ‘dumbed down’. Graphics summarize and reinforce the impact of the information. Basic questions about the workings of climate change and it’s impacts, so far and in the future, are answered. What science is still unsure about, is honestly acknowledged.

But beyond those science communication basics, the National Climate Assessment intelligently applies social science insights into how to communicate about risk in order to maximize the impact the communication has not just on how well the reader understands the issue, but how they feel about it. It applies research on the psychology of risk perception to the challenge of communicating not just so people get the facts, but so they care.

Most climate change communication has framed the issue as a future threat. Future risks don’t worry us as much as threats that are imminent, or current. The basic message of the NCA, offered first and repeatedly through the entire report, is that climate change is not just something we don’t need to worry about until tomorrow. It’s something to worry about NOW.

“Climate change, once considered an issue for a distant future, has moved firmly into the present.”

Graphics support case that climate change is happening NOW. Note the time frame in this chart. 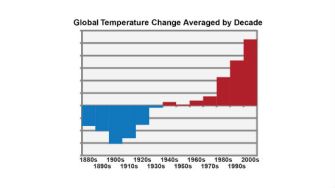 Most climate change communication has framed the issue as a threat to polar bears, or melting glaciers or acidification of the oceans, or to people somewhere else. Abstract threats to others don’t concern us as much as those that put us personally at risk. The NCA makes climate change LOCAL, and describes the threat in terms that people can relate to.

Americans are noticing changes all around them. Summers are longer and hotter, and extended periods of unusual heat last longer than any living American has ever experienced. Winters are generally shorter and warmer. Rain comes in heavier downpours. People are seeing changes in the length and severity of seasonal allergies, the plant varieties that thrive in their gardens, and the kinds of birds they see in any particular month in their neighborhoods.

Other changes are even more dramatic. Residents of some coastal cities see their streets flood more regularly during storms and high tides. Inland cities near large rivers also experience more flooding, especially in the Midwest and Northeast. Insurance rates are rising in some vulnerable locations, and insurance is no longer available in others. Hotter and drier weather and earlier snow melt mean that wildfires in the West start earlier in the spring, last later into the fall, and burn more acreage.

A clickable graphic  lets you read the details about the region where you live.

Climate change has described as, well, about the climate. But who wakes up and checks the global climate report? We check the local weather…will it rain/snow, what will the temperature be…and the NCA provides that too, at least on a regional scale. 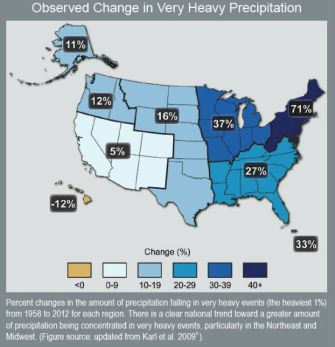 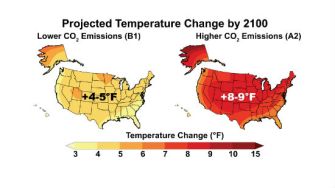 Climate change has been made a polarized issue, largely by those who ideologically oppose the kind of big government intervention that solutions to climate change will require. The NCA addresses the questions the skeptics raise.

But, following the research on science communication that says the most effective way to address such ideologically based skepticism is to avoid sounding confrontational, the NCA’s Frequently Asked Questionsanswer the skeptics in a respectful neutral voice. Throughout the report, the tone is direct, evidence-based and credible, at times dramatic but never strident. That builds trust, and makes the communication more persuasive.

Nonetheless, it is unlikely this single body of work, as informationally rich and shrewdly framed as it is, will prompt much of a change in public opinion, at least not enough, fast enough, to give leaders the public mandate that would make action politically easier. First, despite all the attention the report will get (as part of the roll out the President did interviews with prominent TV weathercasters who polls show have high public recognition and trust), most people probably won’t hear anything about it, and a tiny minority will read any of it. Second, even those who do read some part of the report will probably not suddenly feel personally threatened by climate change enough to shift how much they care about the issue. Psychologically, climate change just doesn’t scare people that much. This report can’t change that.

But the report will play a role in getting the U.S. to take action on climate change. It will almost surely provide a solid basis on which President Obama will claim, as he has in the past, that “the debate is over and it’s time to act.” He will use the report to minimize the impact of the deniers and skeptics on the majority of Americans. This is a classic communication strategy; Don’t try to change the minds and hearts of the most vociferous and ideologically motivated stakeholders. Just minimize their impact by making your case with the larger audience. The convincing case the report lays out will help the President do that.

This is clearly the strategy, as acknowledged to Bloomberg News by John Podesta, the President’s chief adviser on climate change.

“Podesta…said the White House will (use) executive actions to address the problem as most Republicans in Congress reject the scientific consensus. The president, under existing law, has the authority to take action,” Podesta said at a briefing today. Congress “is challenging right now, but hopefully this will change some minds” and “climate deniers will recede,” he said.

Presidential executive actions to be announced in coming days may include regulations on the greenhouse gas emissions of existing power plants, allocation of funds to adaptation programs, Energy Department investment in clean energy to replace fossil fuels, and more. The National Climate Assessment provides the foundation for these actions, and makes them politically more acceptable.

The climate skeptics whose ideological and group identities are tied to the fight against action will not be swayed. They are already picking the report apart. But the NCA makes the case that for action on climate change so credibly and persuasively, that history is likely to look back on it as an important step that finally pushed America to take the threat of climate change as seriously as the danger demands.

It’s no longer just VR vs. AR. There is an alphabet soup of metaverse acronyms, often used imprecisely. So, what do they all mean?
Up Next
Technology & Innovation

Next Up On Norwegian TV: Celebrities Planning Their Funerals

From the country whose hit shows have featured slow boat rides and bird box video streams comes “Kisten” (“The Coffin”) in which famous people spend time thinking about and preparing for their future final send-off.