Hardly a month goes by without me hearing people bemoan the decline of American manufacturing. I find their laments hard to understand, as do other economists.

Why is a manufacturing job superior to a job in any other sector? 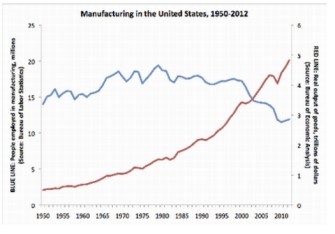 One reason for the huge increase in productivity is that Americans don’t make the same things they used to make. Cheap consumer goods like toys and socks are mostly manufactured overseas, often in China. These are low-value, often labor-intensive products that come with low wages. Making them is not the way to higher incomes for Americans.

Instead of making toys and socks, many Americans started working in the service sector. Indeed, if they hadn’t found jobs in services, unemployment would have become a much bigger problem. But the service sector grew, especially in education and health: 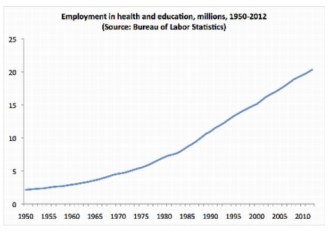 Clearly, the quantity of jobs is not the issue when looking at the importance of manufacturing employment to the economy. But what about quality – is there some way in which manufacturing jobs are better than service jobs?

There are high- and low-paying jobs in both sectors. Some people may be nostalgic for high-paying, unionized manufacturing jobs with long-term security and big pensions. But such jobs still exist in an occupation called teaching. (Yes, teaching requires a bit more education, but so does almost any job these days.) In general, the quality of a job is much more affected by conditions specific to its workers and industry than by being in the manufacturing or service sector.

Today, Americans produce some goods and services and import others. If we produced the ones we imported, we’d almost certainly 1) pay higher prices for them and 2) have lower wages. As a result, news of manufacturing jobs returning to the United States is not always positive. In some cases, wages have simply dropped far enough here – or risen enough elsewhere – that producing abroad is no longer a better deal.

I’ve written elsewhere about why wages in the United States haven’t risen despite the gains in Americans’ productivity. But I still shake my head when I read passages like this, from Beth Macy’s forthcoming book, “Factory Man,” about the survival of an American furniture maker:

“What he was telling me was that, if I was going to Walmart to buy a T-shirt for ten dollars, that would be better than having people in Martinsville and Galax and Hudson making $15 an hour and supporting the local restaurants, insurance companies and banks.”

It was the same sophistry preached by Walmart founder Sam Walton, who claimed he could raise the standard of living by lowering costs of retail goods.

This was not sophistry; it was basic economics. You could pick any product we imported and apply the same logic – would it always be better to produce it domestically and pay more for it? Using this logic, you could argue for eliminating all imports of goods the United States was capable of producing itself, regardless of the cost such production would imply. Just imagine how your standard of living would change if you could only purchase American versions of every imported product. It would be like living in the Soviet bloc, which was not exactly known for the quality of its domestic manufacturing.

In the future, I hope that we will evaluate jobs by their compensation and stability rather than the sector to which they happen to belong. Then we can focus on the real reasons for the stagnation of American wages.

For more on this topic, you might like to read these articles by Robert Reich and Richard Florida.

Related
The Present
How heat pumps of the 1800s are becoming the technology of the future
Innovative thinking has done away with problems that long dogged the electric devices — and both scientists and environmentalists are excited about the possibilities.
Starts With A Bang
JWST’s hunt for most distant galaxies gets double boost
Along with gravitational lensing and ALMA’s incredible long-wavelength spectroscopy, JWST is reshaping our view of the early Universe.
Thinking
Finding your essential self: the ancient philosophy of Zhuangzi explained
Adopting a healthy scepticism towards inherited ideas means “emptying the container of the Self.”
The Future
Startup’s bladeless flying car is designed to reach Mach 0.8
One of Jetoptera’s VTOLs is expected to reach speeds of around 614 mph, about as fast as a commercial jet airliner.
Health
New blood types are often discovered following medical disasters
New blood types are regularly discovered by an unusual absence or an unusual presence — both of which can result in tragedy.
Up Next
‘Doomsday Clock’ Set to Five Minutes to Midnight
Bulletin of the Atomic Scientists: “The risk of civilization-threatening technological catastrophe remains high.”