When I met my last spiritual teacher, the revered HWL Poonja, in 1986, he taught me how to be free. He was such a powerful teacher that within minutes of meeting him, the most amazing thing happened. I asked him how much effort one needs to make in order to be inwardly free. He said, almost whispering, “You don’t have to make any effort to be free.”

The instant he finished uttering those few simple words, I was catapulted into a higher state of consciousness, beyond time. Instantly, in the eye of my mind, I saw water flowing freely down the side of a mountain. I knew in that moment that my own true nature was like that water, ever free, ever unobstructed. I suddenly knew without any doubt that like that water, I’d always been inwardly free. And I’d only imagined that I had been stuck or blocked in any fundamental way. Ignorance, or unenlightenment, was an illusion. In fact, I’d always been free, I just hadn’t known it.

“That’s it!” shouted the master, who was a large man, sitting on the bed in front of me. I looked up at him and said, “But, how did you know?” and he burst out laughing. Those few moments, which occurred twenty-seven years ago, changed my life forever.  The great teacher revealed my own true Self to me, and ever since then, I’ve always had access to that silent, mysterious source of spiritual freedom. Like many others who had the good fortune to experience his grace directly, after spending three weeks in his company, I went from being a seeker to a finder.

What does that mean?

It’s meant that most of the time I experience an emotional stability that is fairly constant. I don’t get too carried away by the highs, and rarely get stuck in the lows. My personality now rooted in that infinite source of timeless, formless being, I tend to experience an easy state of detachment a lot of the time. I’m certainly not anywhere near as enlightened as the greatest historical expressions of humanity’s highest spiritual attainment, but my teacher did bestow upon me a measure of what they knew.

Thirteen years ago, a close friend and student gave me one of the most wonderful gifts I’ve ever received, apart from what I received from my teacher. It came in the form of a little Yorkshire Terrier puppy. I’d had a little Yorkie as a kid and longed to have another one in my adult years, but didn’t have the courage to make the commitment. Then one day, my friend gave me the most wonderful, cute little Yorkie puppy I ever could have imagined. 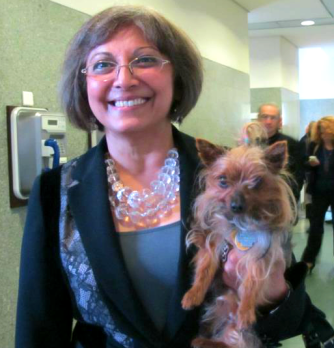 For the majority of these last thirteen years, he’s been by my side most of the time. At first, he was so small that I could hold his entire little body in the palm of my hand. After several months, he grew bigger and eventually reached his full body weight of five pounds. He has slept between my wife and I almost every night. He’s traveled with us all over the world—to so many places that if he had a passport, it would have run out of pages years ago. His constant enthusiasm for life is infectious and ever-new in its innocence.

Like most small dogs, he finds separation unbearable and reunion (even if after only five minutes) the most exciting and positive thing that has ever happened in his entire life. He is always happy to keep me company. We’ve gone for countless walks together and at different times explored nature. He’s always waited for me patiently while I’ve done yoga or had to work late. He’s been endlessly tolerant of my shortcomings and broken promises to him. And he’s always been a boundless source of kindness, sweetness, and joy in my life.

A few days ago, my wife and I found out that my little friend and life companion has terminal cancer. Even though it’s been obvious that he hasn’t been his old self for a while, I never dared to consider it would be this bad. He has stopped eating and spends most of his time sleeping. The day before yesterday, my wife and I had a difficult phone call with his vet. He kept repeating over the phone, “Whatever you decide to do, it’s going to be the right thing.” Then I simply lost control and burst into tears. I couldn’t imagine how I was going to find the strength to put him down.

From where do we find the strength to let go of someone we love so deeply and are so helplessly attached to?

At the highest metaphysical level, my teacher was right: it takes no effort to be free. But interestingly enough, this spiritual freedom is of little help to me now as I face one of the most challenging decisions of my life. As life is so full of paradox, so is Enlightenment. The greatest wisdom traditions tell us that life and death are not separate, but are part of one unbroken unfolding. In my clearest and highest moments, I have no doubt that this is true. But when I have to let go of the kindest, sweetest creature that I’ve ever encountered, I have enormous trouble holding myself to that truth.

The day after tomorrow, my wife and I have decided to let the little guy pass on to the next world. As the vet said, “Whatever decision you make will be the right one.”

I wrote the above words a few weeks ago. Before I could publish it, and right after my wife and I made the decision to put my Yorkie to sleep, the little guy rallied in the most extraordinary and miraculous way. After receiving some antibiotics to give him a boost, he surprised both us and his vet by coming back to life with a vengeance. In fact, his recovery was so strong that my wife and I decided to bring him to Europe with us for a month on our spring trip.

Then one day just before we left, he suddenly weakened and I had to carry him for most of the day. That evening I went out to dinner and when I came home he was gasping for air in a way I’d never seen him do before. My wife and I rushed to the veterinary hospital, but by the time the vet arrived at 1:30 am, life had already left his little body.

In those two weeks, my wife and I were given a gift beyond measure, because we were able to love him even more than we already did. Blessedly, we were freed from having to make that unbearable decision. And when the time came, we were able to let him go more easily, because those precious extra weeks gave us the time to come to greater terms with the impossible paradox of life and death.

Bill Westheimer’s current Kickstarter project, called Ascent: the evolution of analog man to digital man, imagines how man’s future evolution might happen, and what we might become.