As you’re reading this, a power plant in Iceland and a waste recovery facility in Switzerland are sucking CO2 from ambient air and selling it to other businesses. The plant in Iceland even claims to be the first in the world with negative emissions. Behind both projects is a technology developed by the Swiss company Climeworks.

Climeworks, founded in 2010 by two mechanical engineers, has developed a CO2 collector with a novel CO2 filter, that has already been deployed commercially in several world firsts.

Able to manufacture plants that are modular, scalable, and can be located independently of emission sources, Climeworks is ready to be one of, hopefully, many commercial and technological solutions that will help meet climate targets. In fact, the company’s mission is “to capture 1% of global emissions by 2025.”

Earlier this year, Climeworks technology was used for the first time in a waste recovery facility in Switzerland. The carbon capture system is powered with the waste heat of the plant and the 900 tonnes of CO2 captured annually are sold to a nearby greenhouse.

CO2 is a valuable agricultural fertiliser that can increase the growth of vegetables such as tomatoes and cucumbers by up to 20 per cent. Before the installation of the new technology, a truck had to cover large distances to fill up a CO2 tank and ensure the supply of the greenhouse.

In another first this year, in collaboration with Iceland’s multi-utility company Reykjavik Energy and funding from the European Union, Climeworks launched the CarbFix2 project.

The project, which is still in trial phase, equipped one of the world’s largest geothermal power plants in Hellisheidi with a direct air capture module, thus combining CO2 air capture with safe and permanent geological storage – injecting and mineralizing CO2 in basalt rocks at an industrial scale.

By capturing CO2 from ambient air and storing it permanently underground, the CarbFix2 project is effectively creating a carbon removal solution by imitating natural processes but speeding them rapidly. 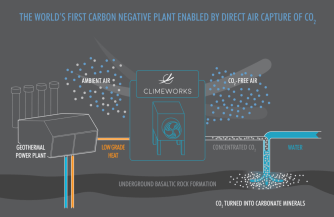 CO2 is collected from the air via a patented filter. Once the filter is saturated, it is heated by waste heat from the power plant and the CO2 is released and bound to water. The carbonated water is then pumped more than 700 metres underground, where it reacts with the basaltic bedrock, forming solid minerals. A permanent, safe and irreversible storage solution is created.

The technology developed by Climeworks can be utilized for achieving negative emissions by storing the collected CO2 underground. It can also be used commercially by selling the extracted CO2 to the food and beverage industry, or for the production of renewable fuels and synthetic materials.

The current capacity of Climeworks is 150 CO2 collectors per year equal to 7500 tonnes of CO2. This could offset the annual carbon footprint of 375 average Americans.

For the very first time, an AR contact lens was worn on the eye of a human subject. And it has about 30 times the pixel density of an iPhone.
Up Next
Culture & Religion

Is Not Having Children a Moral Decision?

The world’s human population is skyrocketing, creating more competition and suffering. Yet few thinkers address a solution. Is there one?