Oklahoma City, the “buckle of the Bible Belt,” may soon have a monument to Satan on its statehouse steps.

Yes, that Satan, the devilish guy whose name is an anagram of the red-suited gentleman coming soon to chimneys near you. Christian conservatives, of all people, seem to be responsible.

In their zeal to tout their faith in the public square, conservatives in Oklahoma may have unwittingly opened the door to a wide range of religious groups, including satanists who are seeking to put their own statue next to a Ten Commandments monument on the Statehouse steps.

The Republican-controlled Legislature in this state known as the buckle of the Bible Belt authorized the privately funded Ten Commandments monument in 2009, and it was placed on the Capitol grounds last year despite criticism from legal experts who questioned its constitutionality…

But the New York-based Satanic Temple saw an opportunity. It notified the state’s Capitol Preservation Commission that it wants to donate a monument and plans to submit one of several possible designs this month… 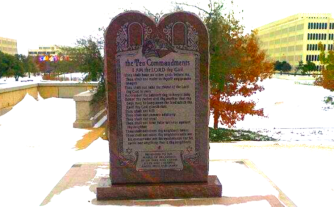 But the promise of a pending pentagram in the public square would be no surprise to James Madison, the founding father who made a thorough case for separation of church and state back in 1774.

In his classic essay “Memorial and Remonstrance,” Madison recited 15 arguments against a bill that would have taxed Virginians to fund salaries for teachers of Christianity. Had Oklahoma City’s religious conservatives read this essay, they may have demurred from plans to Exodus up their statehouse.

It is proper to take alarm at the first experiment on our liberties…Who does not see that the same authority which can establish Christianity, in exclusion of all other Religions, may establish with the same ease any particular sect of Christians, in exclusion of all other Sects? That the same authority which can force a citizen to contribute three pence only of his property for the support of any one establishment, may force him to conform to any other establishment in all cases whatsoever?

The issue in Oklahoma City is symbols in the public square, not taxation, but the principle is similar. Don’t push for your Ten Commandments display unless you are happy welcoming monuments to Islam, Hinduism and—yes—Satanism on your statehouse steps. Once a public forum is opened up to religious messages, the Constitution does not permit a state to favor some over others. Moses, meet Satan. A line from Scripture suggests itself: “Be not deceived; God is not mocked: for whatsoever a man soweth, that shall he also reap” (Galatians 6:7-9)

Another thing: by flaunting religion in the public sphere, Oklahoma’s legislators are sullying what they wish to sanctify. Madison again:

Eccelsiastical establishments, instead of maintaining the purity and efficacy of Religion, have had a contrary operation. During almost fifteen centuries has the legal establishment of Christianity been on trial. What have been its fruits? More or less in all places, pride and indolence in the Clergy, ignorance and servility in the laity, in both, superstition, bigotry and persecution.

They say that nobody understands quantum mechanics. But thanks to these three pioneers in quantum entanglement, perhaps we do.
Up Next

Your Brain is Lying to You in this Video

Warning: this video might drive you a little bit nuts. Even after you realize that it is messing with your head, the optical illusion in the video will continue to convince you to believe that two squares are identical. What a reminder of how easily we are fooled!