A new study from some top economists shows that income mobility in the United States hasn’t changed in half a century. At any rate, that’s the way plenty of news outlets wrote their headlines. Yet the study also makes a much more worrying point: income mobility is much less powerful than it used to be.

Here are some of the headlines from this morning: 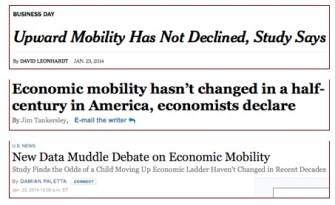 All of these headlines are referring to one finding of the study: given a person’s starting position, the chances of moving up or down the income distribution are about the same today as they were in the past several decades. The problem is that starting positions have changed dramatically.

Today, the income distribution is far more skewed than it used to be, and most of the skew is at the top. As a result, a person born into a low-income family will have worse expectations for their income relative to people at the top, even though mobility hasn’t changed.

To see why, let’s say that income mobility still hasn’t changed today. Now consider someone whose parents are at the 10th percentile of income. According to the study, this person can expect, on average, to have an income in about the 38th percentile of their cohort.

What will this mean for the person’s actual income? The ratios of incomes between the bottom four quintiles haven’t changed very much in decades, either. So in terms of actual income, a child born into a low-earning family can expect the same sort of improvement today as in 1967. But the ratios with the top quintile have: 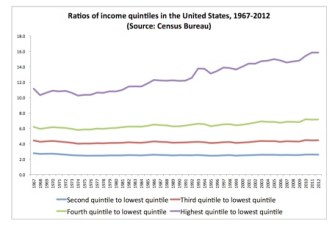 Despite the lack of changes in mobility, the child can expect to end up further from the top quintile now than at any time in the past 35 years. In other words, someone starting on the ground can still jump one step up the income ladder, but the top step has gotten much further away from the other four. And as I’ve written, these relative differences in income can affect access to opportunity to a great degree.

The power of mobility has diminished enormously, because these days it’s much harder to close the gap with the highest earners. Thanks to rising inequality, the same level of mobility just can’t make as much difference anymore. As the authors say, “the consequences of the ‘birth lottery’ – the parents to whom a child is born – are larger today than in the past.” It’s too bad that wasn’t the headline.

Related
The Present
How heat pumps of the 1800s are becoming the technology of the future
Innovative thinking has done away with problems that long dogged the electric devices — and both scientists and environmentalists are excited about the possibilities.
Starts With A Bang
JWST’s hunt for most distant galaxies gets double boost
Along with gravitational lensing and ALMA’s incredible long-wavelength spectroscopy, JWST is reshaping our view of the early Universe.
Thinking
Finding your essential self: the ancient philosophy of Zhuangzi explained
Adopting a healthy scepticism towards inherited ideas means “emptying the container of the Self.”
The Future
Startup’s bladeless flying car is designed to reach Mach 0.8
One of Jetoptera’s VTOLs is expected to reach speeds of around 614 mph, about as fast as a commercial jet airliner.
Health
New blood types are often discovered following medical disasters
New blood types are regularly discovered by an unusual absence or an unusual presence — both of which can result in tragedy.
Up Next
Starts With A Bang
How Many Planets In The Universe?
Given all the stars, galaxies and what we know about the laws governing reality, how many planets are there in our observable Universe?“Stuff your eyes with wonder, live as if […]