Chimpanzees laugh when tickled, but they do not get in front of the group and make ‘em laugh. There’s even evidence that rats and snakes laugh. (That one’s a little … creepy).

So if it’s visible and replicable in the mammalian chain, we can probably assume that earlier species of man had a variant of humor, but we don’t know.

The thing is, being in front of a group of people, or having a conversation with a group of people where one of the people is being funny for the group, can only be a function of language. Therefore, it’s unique to humans, as far as we know. (I mean … do whales and dolphins perform stand-up under the sea?)

As the video describes, it can be thought of as a form of “tickling” a bunch of people at once.

It’s a high-end, supremely social interaction. In fact, we laugh 30 to 40 times more with people than when by ourselves.

Lastly, there are some physiological benefits of laughter. It can lower blood pressure, and it’s an experience of pleasure. It therefore relieves stress. It’s not like it’s a cure-all, but laughter can indeed make life easier.

Cartoonist Robert Mankoff, also Cartoon Editor for The New Yorker, explains in his own charming way below.

For books and more things from Mankoff, go here.

(And salute to George Carlin, whatever roof he may be stuck on, who would have been 79 this month. RIP.) 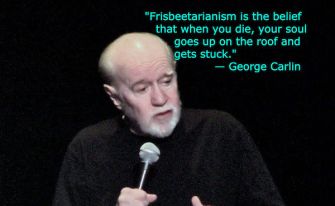 The artifacts were often made from found objects – an Ivory dish-soap bottle transformed into an earthenware figure.
Up Next
Technology & Innovation

Your cellphone won’t give you brain cancer, Australian researchers say

A recent study out of Australia has crunched data over a 29-year timespan and found no correlation between cellphone usage and brain cancer. Hooray!