Is time travel possible? Physics gives us absolutely no reason to believe that it could be. Last month, research on the possibility of a sort of time travel was published and breathlessly reported by popular science media. Can time travelling as envisioned by Madeleine L’engle and Doctor Who now actually occur? The feasibility of this new claim relies upon two fantastic concepts of modern physics: quantum clones and wormholes.

Quantum cloning sounds like a science fiction plot device. Simply put, it means to make an exact replica of a quantum state. Like many scientific plot devices, it is not real. (Some research has gone into imperfect cloning, but a clone by definition is a perfect copy; this is a misnomer.) Quantum cloning is forbidden in the universe as we know it by a rule with an equally silly name: the no cloning theorem. Without resorting to mathematical proofs, we can say that quantum cloning is impossible because it would allow us to beat the quantum uncertainty principle.

In a new paper, physicists claim that we can create a quantum clone of a state from the past. This is a sort of time travel. It’s an exciting idea, and the authors include a handy “circuit diagram” for their idea. (See figure below)

The important things to observe in this arcane technical figure are the three lines at the bottom, which I’ve circled in red. These are wormholes! The quantum state to be copied, called ρ, is measured by UICM which gives out a measured state. The measured state then must enter into a wormhole and be retrieved again. To make this process work well, you need lots and lots of wormholes. In fact it only makes perfect clones when you have so many wormholes that you can’t count them all.

So, what’s the problem? For one thing, wormholes may not exist. But, even if they do, there is no known way to send anything through one. Wormholes, at present, are entirely science fiction. 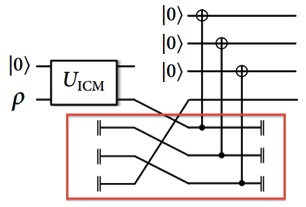 Albert Einstein and Nathan Rosen first proposed wormholes in the 1930s. Certain configurations of wormholes are theoretically allowed by solutions to Einstein’s theory of general relativity, which geometrically describes gravity. These allowable wormholes have never been observed experimentally. Another great physicist, John Wheeler, then discovered that nothing could be sent into such a wormhole and recovered out of it again within one universe. Other types of theoretical wormholes may be traveled through, but only with the aid of such illusory media as “negative mass matter.”

The obvious fantasy of this idea is clear without resorting to deep analytical methods of quantum mechanics and gravitational theory. Further problems still arise with time travel due to simple logic. You could travel back in time and stop your grandfather from meeting your grandmother. Then you would never be born in the first place. But then you could not have gone back to separate your grandparents. These types of paradoxes of causality plague any idea of time travel to the past.

Be skeptical of any theory that produces the possibility of time travel, particularly if it relies on wormholes. That’s not a theory based on physical reality, but rather fodder for science fiction writers and television shows.

Tom Hartsfield is a physics Ph.D. candidate at the University of Texas.

Far from acting as the conduits of a benevolent deity, these religious leaders threw the teachings of their own church out of the window.
Up Next

The question remains as to whether the bright spot seen moving away from the sun was simply debris, or whether a small nucleus of the original ball of ice was still there.