First things first – I’m not a doctor, but the surprise new rules issued by the GMC (the British regulator for doctors) still worry me. Not just because I might perhaps one day be a doctor, but because I certainly will one day be a patient. The benefits I receive from writing anonymously allow me the opportunity to challenge authority and argue online one-on-one with powerful people without fearing for my safety or my job or putting myself at risk of casual prejudice. It doesn’t take a genius to see why these might be weapons you might like your doctor not to be dispossessed of.

A couple of examples: only yesterday I called for a fellow writer at this publication to be fired. A blog post I wrote last year resulted in previously undisclosed disclosures of interest being added to published research after publication. I’ve attacked countless quacks and pseudoscientists with deep pockets and called them out directly using social media. All of these things I might have done differently, less publicly or even not at all, if I had not been protected by anonymity. All of these things you might one day wish your doctor to do for you. But for British doctors, these rights are being withdrawn overnight with no prior discussion. Anonymous doctors are currently scrambling, discussing how to proceed, with some already “coming out” on their blogsand on social media: 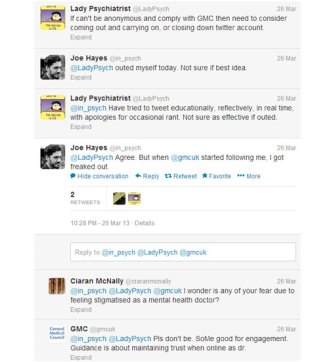 For doctors who don’t want to take the leap, the only option is to go into lockdown. So if you follow doctors on Twitter prepare to see plenty of these:

If you happen to be a doctor writing anonymously please follow me before you put your account in to lockdown, I will try to keep you updated on the situation by retweeting any relevant information I receive. 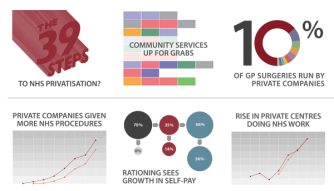 This in an extremely worrying time for this to occur. British doctors are currently up in arms (if you are in the UK you can join 357,000 others and write to your MP here). Doctors have already raised concerns that complaining publicly about their new privatised employers would breach their new contracts. Doctors have even been made to sign the Official Secrets act as a matter of blanket company policy by at least one private employer – ATOS. According to the BMJ massive changes will occur in three days time, on the 1st April. Worryingly , for the past two years the BBC has failed to provide a platform to doctors – so only those of us who follow doctors directly online are kept completely informed.

At a time when doctors are so worried about what is being done to the health service that some have recently gone as far as forming a political party to oppose the changes – a previously unheard of step, it is worrying that we are curtailing doctors ability to speak out without fear of sacking.

There are many pseudoscientists and charlatans online offering all forms of medical services, but these new rules will not affect these people – as they are not real doctors anyway, so they don’t have to abide by the GMC’s rules. I do however think it right that our doctors should be able to debunk these people and fight changes from on high without compromising their personal information and therefore, potentially their jobs.

Update 09/04/2013: The General Medical Council have responded to the concerns with a post on their Facebook page which provides some clarification:

Jane O’Brien from the GMC’s standards and ethics team on our new social media guidance.

On the 25  March 2013 we published new explanatory guidance on Doctor’s use of social media (PDF) alongside the new edition of Good medical practice for all UK doctors.The response from the  profession has been lively — particularly about the phrase:

Like all our  guidance, Doctors’ use of social media describes good practice, not minimum standards.  It’s not a set of rules.

But the response from the profession shows that doctors are unclear or uncertain about:

We’ve answered these questions below and also provided some background information about how the guidance was developed.

Why identifying yourself as a doctor is good practice?

Patients and  the public generally respect doctors and trust their views — particularly about  health and healthcare. Identifying yourself as a member of the profession gives  credibility and weight to your views. Doctors are accountable for their actions  and decisions in other aspects of their professional lives – and their behaviour must not undermine public trust in the profession. So we think  doctors who want to express views, as doctors, should say who they are.

What does ‘identifying yourself as a  doctor’ mean in practice?

There is a bit of judgement involved here. For  example, if you want to blog about football and incidentally mention that  you’re a doctor, there is no need to identify yourself if you don’t want to.If  you’re using social media to comment on health or healthcare issues, we think it’s  good practice to say who you are.In the guidance we say ‘you should‘ rather than ‘you must‘. We use this language to  support doctors exercising their professional judgement. This means we think it  is good practice but not that it is mandatory.We’ve  explained the difference in our use of these terms in paragraph 5 of Good medical practice, and at:

Does this restrict doctors’ freedom  of expression?

We are not  restricting doctors’ right to express their views and opinions except:

One of the  key messages in the guidance is that although social media changes the means of  communication, the standards expected of doctors do not change when  communicating on social media rather than face to face or through other  traditional media (see paragraph 5 of the social media guidance).

Will the  GMC take disciplinary action if I decide not to identify myself online?

This is  guidance on what we consider to be good practice. Failure to identify yourself  online in and of itself will not raise a question about your fitness to  practise.Any concern  raised is judged on its own merits and the particular circumstances of the case.  But a decision to be anonymous could be considered together with other more  serious factors, such as bullying or harassing colleagues, or breaching  confidentiality (or both) or breaking the law. The guidance doesn’t change the  threshold for investigating concerns about a doctor’s fitness to practise.

Does this guidance apply to personal use?The GMC has no interest in doctors’ use of social media in their personal lives —  Tweets, blogs, Facebook pages etc. But doctors mustn’t undermine public trust  in the profession. Usually this means breaking the law, even where the  conviction is unrelated to their professional life. For an example, read the recent Fitness to Practise Panel decision on the MPTS web page (PDF).

Why can’t  I raise concerns anonymously in social media? We are not trying to restrict discussion about important issues relating  to patient safety and certainly don’t want to discourage doctors from raising  concerns.However, we wouldn’t encourage doctors to do so via social media because  ultimately it’s not private and it might well be missed by the people or organisations who are able to take action to protect patients.Our confidential helpline — where you can speak to  an advisor anonymously — enables doctors to seek advice on issues they may be dealing  with and to raise serious concerns about patient safety when they feel unable  to do this at local level. Our Confidential Helpline number is 0161 923 6399.

If  you want to talk to an independent organisation, we work with Public Concern at  Work whose legal advisors are trained in managing whistleblowing calls. They  can support and direct doctors who wish to raise concerns.

Why do publications like the BMJ  allow anonymous blogs/letters articles? Does the guidance mean they can’t do  that anymore?BMJ is entirely  independent of the GMC, and it is a matter for them to decide what is  appropriate for their website. However the Committee on Publication Ethics  considered a case and published their conclusions at

Many blogs  are published without formal editorial or publisher control — although there  may be moderation on some sites. Using your name (or other identifying  information) provides some transparency and accountability.

How did we consult on the guidance?We consulted  on the explanatory guidance in 2012 and wrote to all registered doctors via our publication GMC News in May 2012 asking them to tell us their thoughts on the  draft social media guidance. As part of this  public consultation, we received 80 responses from organisations and  individuals (with 49 of the individual respondents identifying themselves as  doctors). Specifically we asked whether it was reasonable for us to say that  doctors should usually identify themselves when using social media in a  professional capacity and 63% (49 respondents) agreed while 16 respondents  disagreed and 13 were unsure. 39 of those who responded commented on this  point.Some of the responses from doctors in the consultation included:

‘Doctors should take ownership of  information given in a professional capacity as it is important that we are  accountable for our professional actions.’

‘Too often, people hide behind  usernames on internet and on social media — if you have something to say,  don’t be a coward.’

Patients groups also felt that being  open and honest when communicating online was important saying:

‘Doctors should also be conscious of the widespread access to much social media, e.g. Twitter, which could mean that their social media engagement could endanger public confidence in the profession.’

Of course, some expressed the opposite view including:

‘A doctor should be able to state that they are a medical professional without having to publicise their personal data. For example, when commenting on an online article it may be relevant that the comments come from a doctor but it should not require full identity disclosure. Where a comment is formal and part of a professional role, it would be more reasonable to expect identity disclosure.’

What does the final guidance say?

So after  careful consideration of all the views and the arguments on both sides the  final guidance says:

What’s happened since we published?

We  acknowledge the level and strength of feeling the petition represents. However,  there is nothing in the guidance that restricts doctors’ freedom of speech  online or stops them from raising concerns. The guidance is a statement of good  practice, and the paragraph on anonymity in the guidance is framed as ‘you should‘; rather than ‘you must‘; to support doctors exercising their professional judgement.

Perform at your mental peak.
Up Next
Politics & Current Affairs

The California city may be the first in the nation to replace residential electric meters with smart meters that provide outdoor wi-fi through a separate channel.