With apologies to Lexington and Concord, the real shot heard ’round the world was fired June 28, 1914 in Sarajevo by a 19-year-old Bosnian Serb named Gavrilo Princip. His target was the Austro-Hungarian Archduke Franz Ferdinand, though Princip also killed the archduke’s wife, Sofie. Ferdinand’s killing caused Austria-Hungary to swiftly declare war against Serbia. A complicated network of alliances quickly drew most of the major European powers into the growing conflict. Germany, facing the prospect of a two-front war, invaded France by way of Belgium. The rest is history.

While Franz Ferdinand is well-remembered as the man whose death led to the outbreak of the Great War (though to some millennials he’s merely an indie rock band), Gavrilo Princip is much less widely known. His story and memory are still contested in parts of Europe today. 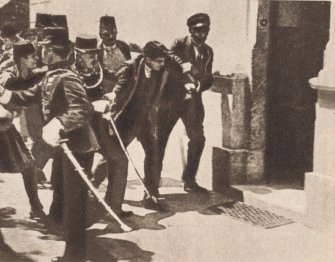 To some, Princip is a hero. To others, a villain. His shot began a conflict that would claim the lives of 17 million people (including nearly 20% of the entire Serbian population). But to some, his actions were a strike against tyrannical oppression. This conflict of opinion resonates today in Sarajevo, which will recognize the assassination’s centennial this weekend with a varied schedule of events. To many of the city’s Bosnian Serbs, Princip was a freedom fighter. To the city’s Muslims and Croats, he was a scoundrel.

It should be noted that of all the members of the Austro-Hungarian royal family, Ferdinand was among its most Serb-friendly and actively opposed an earlier proposed conflict.

Because Princip was under 20-years-old at the time of the murder, he was exempt from the death penalty under Habsburg law. He received a twenty-year sentence but died of tuberculous after only 3 years imprisonment (he weighed only 88 lb/40 kg at the time of his death).

I can’t encourage you enough to read up on Princip, Ferdinand, and the sparks that lit World War One, especially with this week’s major anniversary bringing the monumental event to the forefront of modern historical examination.

Read more about how Sarajevo intends to commemorate the event this weekend in The Guardian.

For more on the outbreak of World War I and the conspiracy to assassinate Franz Ferdinand, I highly recommend Dan Carlin’s Hardcore History podcast: Blueprint for Armageddon. Carlin does a fantastic job recounting the absurd and wild story (culminating in history’s greatest coincidence) that led to the assassination.

Related
Starts With A Bang
Ask Ethan: What are white holes, and do they really exist?
In General Relativity, white holes are just as mathematically plausible as black holes. Black holes are real; what about white holes?
Life
Strange life forms create an “alien” ecosystem in an abandoned uranium mine
Slimy biofilms made up of bacterial and eukaryotic life forms have taken over an abandoned, flooded uranium mine in Germany.
Hard Science
Earth has an eerie “sodium glow,” and astronomers use it to image stars
Air currents in our atmosphere limit the resolving power of giant telescopes, but computers and artificial stars can sharpen the blur.
Health
How saliva changes the flavor of food
“It’s a liquid, but it’s not just a liquid.”
High Culture
Why are flood myths so common in stories from ancient cultures around the world?
Could the prevalence of flood myths around the world tell us something about early human migration or even the way our brains work?
Up Next
Surprising Science
Armband Lets You Control Devices with Hand Gestures, Launches Later this Year
The Myo armband, developed by Canadian company Thalmic Labs, allows wearers to control electronic devices with hand and arm gestures. The technology evokes sci-fi films such as Star Wars and Minority Report.