The percentage of Americans who own a tablet has risen tenfold since 2010, with 45 percent of Americans in 2015 possessing one. In 2015, 92 percent of Americans owned a mobile phone. Indeed, over 98 percent of 18- to 29-year-olds had one. And they gazed into them for a significant amount of time each day. According to a new survey released at the Consumer Electronics Show by the Vision Council, almost 90 percent of Americans stare at a screen for over two hours every day — and it seems that the strain of peering into our mobile phones and tablets is causing serious vision problems.

“I’m getting the millennials coming in feeling symptoms you used to feel in your early 40s,” Dora Adamopoulos, a medical adviser to the Vision Council toldThe Washington Post. The Vision Council survey discovered that the risk for eye problems differs with age. Younger people in their 20s and 30s experience much more severe symptoms than older folks. “When you really look at some of the data, children especially, and the length of time [they are] spending — and on not just one device but multiple devices — it’s astounding,” Adamopoulos said.

Dubbed digital eye strain, the symptoms are characterized by dry, irritated eyes. Many people have blurred vision or burning in their eyes. Some even suffer from back and neck pain. “Our eyes are not built to stare at digital screens all day,” said Justin Bazan, medical adviser to the Vision Council. 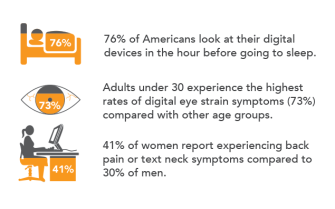 What causes the problems is something called high-energy visible light, or blue light. Almost every digital device emits blue light; it falls at the shorter end of the electromagnetic spectrum in terms of wavelength. Remember the ROY G. BIV acronym from science class? Red-Orange-Yellow-Green-Blue-Indigo-Violet. Those are the colors that make up the visible spectrum. Well, with a wavelength between 380nm and 500nm, blue light is one of the shortest and highest-energy wavelengths. It can reach “deeper into the eye than other kinds of light and can cause effects that are cumulative.” Further, constant exposure to it can damage retinal cells. Some studies have shown that blue light can be disruptive at night, “interrupting sleep patterns and circadian rhythms that scientists believe could play a role making people more vulnerable to chronic diseases.”

What are some other things do we do wrong with our devices according to the Vision Council?

The Vision Council recommends a number of things to reduce the symptoms of digital eye strain, not least of which is to follow the 20-20-20 rule: Every 20 minutes, take a 20-second break and look at something 20 feet away. That will relieve eye strain and help avoid dry eyes.

Other tips from the Vision Council:

Collective illusions — false assumptions about society that many people share — have existed for thousands of years in many different ways. Today, because of social media and modern technology, […]
▸
32 min
—
with
Todd Rose
Up Next

Meanwhile, In Another Part of the Muslim World…

Culturally and economically, modern Turkey is at a dangerous crossroads.