While you are well aware of the physical inputs we humans inject into your system, you may be blind to the human politics and polling and psychology about climate change that help explain what we’re doing to you (and ourselves, of course, since the biosphere in the Anthropocene Age definitely includes us.) But it may be of interest to you to keep abreast of the latest human behavioral developments that bear on what your future (and ours) looks like. I am pleased, and sad, to say there has been good news, and bad.

You have certainly heard by now that the United States has proposed regulations to curtail carbon dioxide emissions, which is very good news, though the bad news is that the cuts don’t amount to much (just 10% of the U.S.’s 6% of overall global carbon emissions) and they won’t happen very soon (by 2030). Kind of depressing, I know, that this seems to be the best the world’s largest per capita polluter can do.

But you may be encouraged to know that the regulations on power plant emissions are not all the U.S. is doing. I am pleased to inform you that there is good news just out about the effectiveness of federal government controls on motor vehicle fuel economy slapped on manufacturers back in 2007 and ‘08 when they came hat-in-hand to the government in need of wads of cash to avoid bankruptcy. The latest Eco-Driving Index from the University of Michigan finds that vehicle emissions are 22% lower that they were just seven years ago, and over the next several years fuel economy will rise enough to cut emissions even more than the power plant regulations will. Check it out. The progress looks pretty encouraging. 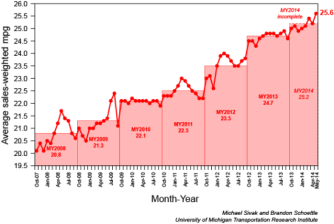 Of course, that still isn’t nearly enough to turn around the overall trend of what we’re doing to you, and I’m afraid it doesn’t look like we will. Two bits of bad news on that account; first, the sobering assessment of Vox’s Ezra Klein in Seven Reasons Americans Will Fail on Climate Change, arguing that it’s time to get realistic about the mess we’ve made rather than naively hope that innate human risk perception psychology is going to suddenly change and get us to do the really major things we need to do, now. You might recall that this is the kind of realism I called for in Andy Revkin’s DotEarth blog a while back in A Risk Analyst Explains Why Climate Change Risk Misperception Doesn’t Necessarily Matter.

And as if to reinforce Klein’s point and mine, Tony Leiserowitz at Yale is out with another survey of public opinion on climate change, which finds that while a slight but stable majority of Americans think climate change is real (they aren’t caught up in the ideological nonsense of Republican climate skepticism), very few Americans feel all that worried by the significant changes you are already experiencing, even though the recent National Climate Assessment made clear that bad things are already happening right here in the U.S of A. (Seth Borenstein of AP did a great job just yesterday identifying the parts of America – the Northeast and Southwest – where temperatures are changing the most, though of course you already know that). 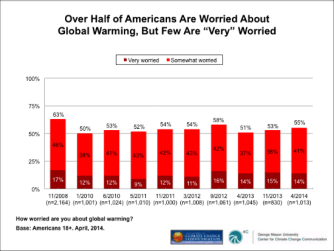 Want to see something REALLY scary for what we’re doing to you, and likely will continue to do? And you don’t have to be a genius to understand why. You just have to understand the basic psychology of risk perception, that we worry more about things that feel like they might threaten us personally, soon, and climate changes doesn’t. Read this chart and weep. 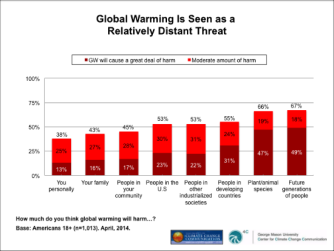 Better not count on public opinion to turn things around.

But I don’t want to end on bad news. There may actually be a glimmer of hope on the political front. The stubborn intransigence of Republicans on climate change may be softening, at least just a bit. Facing a nationwide presidential election in a couple years (as well as the overwhelming scientific evidence, of course) GOP leaders are backpedaling from arguing that whether climate change is happening is still a matter of debate. (I know. Laughable, eh?) Speaker John Boehner and potential presidential candidate Florida Senator Marco Rubio, among others, are now saying “I’m not qualified to debate the science over climate change,” and “I’m no scientist.” Sounds like they’re giving themselves some wiggle room. Of course they are still absolute obstructionists to the government intervention necessary for progress. Boehner called the modest C02 regulations, “nuts”. And cap-and trade pricing of carbon, a free market idea that conservatives themselves came up with that helped you breath a little better when it cleaned the air of acid rain-causing pollutants in the 90’s (at far less cost that naysayers warned)? Fugheddaboutit (a phrase common in the biosphere of New York City).

There’s more possibly good news recently as well. There are some hints from China about controlling CO2 emissions, but Revkin reports those hints may just be straws in the ever-warming wind.   And you may have heard about this guy Tom Steyer shelling out big bucks from his personal fortune to help political candidates who support progress on climate change, kind of the anti-Koch brothers.

It’s hard to know how all this will play out. So let me simply close by saying that as a member of a species that is having a huge impact on how you operate, I am sorry for the mess we’re making, sorry for the way our subjective psychology of risk perception is getting in the way of fixing things, and, on behalf of my fellow beings, I remain grateful for all you provide.

The massive craft could carry 100 humans to Mars and revolutionize space exploration.
Up Next
Culture & Religion

Tonight’s Major League Baseball amateur draft wraps up years of prep work by team scouts, executives, and medical professionals. With millions of dollars of player investments hinging on drafting the right players, baseball front offices have got their strategies down to a science.