Roads, pavements, and other impervious surfaces, cover 112,610 square kilometers in the US alone, which is almost exactly the size of my home country – Bulgaria. According to these calculations it will take 4 times as much surface area, or about 496,805 square kilometers of solar panels to power the world. Put the two numbers together and you get the idea of Scott and Julie Brusaw: replace all concrete roads with solar panels and solve the energy problem.

The idea is certainly exciting, its feasibility definitely questionable. Still, the Solar Roadways project has already won the support of the U.S. Federal Highway Administration, World Technology Award For Energy, Google, and thousands of backers on indiegogo who have secured the $1 million required for the next phase of the project – moving from prototyping to manufacturing. So, what is the project, anyway?

Solar Roadways is a modular paving system comprised of glass solar panels that have already been tested for load, traction and impact resistance (and can withstand the heaviest of trucks – 250,000 pounds). The panels can be installed on roads, parking lots, driveways, sidewalks, bike paths, playgrounds, you name it… and, of course, generate electricity. In addition, the panels are equipped with microprocessors that make the road “intelligent” and also come with heating elements that will keep the roads snow and ice free all year long. The panels have many other features as well, like LEDs to make road lines and signage (imagine a playground made of solar panels which is one day a soccer field, another a basketball field and so on), and attached Cable Corridor to store and treat stormwater and provide a “home” for power and data cables (no more cables hanging above ground). According to the inventors, EVs will be able to charge from parking lots and driveways and after a roadway system is in place, mutual induction technology will allow for charging while driving. 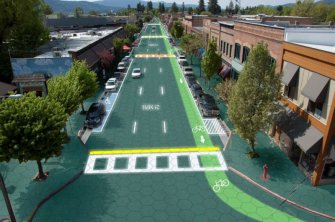 On the other side of this visionary project is the reality of its cost. According to some calculations, it will cost $56 trillion to actually cover all roads in the U.S with the solar panels. Nevertheless, the creators say that “Many have been waiting on redoing driveways, parking lots, etc. hoping that we will be ready to give them the solar option they want.”

Solar Roadways can also become the Smart Grid. The roads that already traverse each country are perfect for becoming the grid that carries our power. It will allow us to create an organized system, a decentralized system which is secure and protected, unlike the current centralized power stations. Solar Roadways can become the hub which welcomes other types of renewable energy and other inventions into the Smart Grid for distribution.

I, personally, choose to share the sentiment of the following video: imagine a world with solar freaking roadways, man!

Related
Starts With A Bang
Ask Ethan: What are white holes, and do they really exist?
In General Relativity, white holes are just as mathematically plausible as black holes. Black holes are real; what about white holes?
Life
Strange life forms create an “alien” ecosystem in an abandoned uranium mine
Slimy biofilms made up of bacterial and eukaryotic life forms have taken over an abandoned, flooded uranium mine in Germany.
Hard Science
Earth has an eerie “sodium glow,” and astronomers use it to image stars
Air currents in our atmosphere limit the resolving power of giant telescopes, but computers and artificial stars can sharpen the blur.
Health
How saliva changes the flavor of food
“It’s a liquid, but it’s not just a liquid.”
High Culture
Why are flood myths so common in stories from ancient cultures around the world?
Could the prevalence of flood myths around the world tell us something about early human migration or even the way our brains work?
Up Next
Apple, Home Automation & Smart Aging by Stealth
The word on the street is that Apple is set to announce a major foray into home automation next week at its annual developers conference. As noted by other analysts, […]