In September of 1965, Life magazine ran a piece on medicine’s “astonishing” and “audacious experiments” that might even promise a “kind of immortality.” The first article dealt with reproduction.

The article predicted IVF technology not so much as an infertility treatment but as a means to create a space age “test tube colony” on another planet.  A doctor imagined that “fertilized egg cells could be shipped anywhere in cold storage containers.”

Attuned to the era’s preoccupations, the article envisioned “these techniques as particularly suitable to the space age, as a means of colonizing the planets” without the expense of sending heavy, fully-grown human-payloads into space. Scientists could send “test tubes” of fertilized egg cells instead, at a fraction of the cost.

The series also featured ultrasound. This technology was in its infancy. In 1965, it was producing hazy images that doctors called “semi-mystical” and akin to medical “witchcraft.” Life’s cover shows a woman, laying under a wave-conducting bag of water, as “ultrasonic waves project” a basic image of the fetus’ head on to a screen.

The article describes the pre-sonogram invisibility of the fetus and the opacity of the mother almost as a pathology. “Isolated in its mother’s womb,” they write, “the human fetus until recently has been inaccessible” to treatment or observation.

“Ultrasonics,” however, “probe beneath the surface” (the surface being the woman). With pioneering breakthroughs in the “brand new field of fetal medicine, the patient-within-a-patient will have come into his own.”

In the earliest years, images of ultrasound featured both the patient and the “patient within.” They depicted the symbiosis of pregnancy, giving visual weight to both. 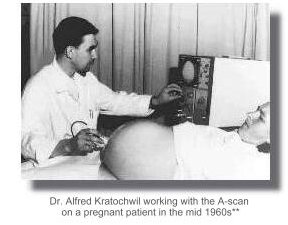 This was the common visual semiotic with first-generation sonograms. Typically, the photograph depicts the pregnant woman, the entire machine, the doctor operating the machine, and a glimpse of the “semi-mystical” fetal image in the corner. 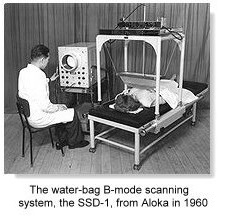 Sonogram technology was the brainchild of war and a Scottish boilermaker. A boilermaker in Glasgow and Ian Donald, a Scottish professor, were the first to think about using sonar for medical diagnosis.  A “metal flaw detector” had been developed during WWII. In 1955 it occurred to Donald that he could use this technology “to detect flaws in women,” describes Dr. James Willocks in a 1996 article on ultrasound. Donald took two cars to the boilermaker’s research department, loaded with a “collection of lumps” such as recently-removed fibroids and ovarian cysts and a piece of steak, to experiment with.

When Life ran this article in 1965, more advanced “real-time” scanners that made fetal motion visible had just been produced by Siemens, in Germany. The “Vidoson” machines sold well in Europe, but not in the U.S.  American radiologists didn’t know how to “see” what they were seeing, accustomed as they were to interpreting static images. Likewise, “obstetricians were simply using the scanner probe as a torch to ‘look inside’ the uterus,” writes Dr. Joseph Woo.  They didn’t necessarily know what they were looking at, or why.

The visualization technology did solve the newly-discovered “problem,” however, of a pregnant woman’s opacity, and seemed to have a “psychological” benefit.  At a 1978 conference in Belgium, R. Chef reflected on sonography’s start:“For almost ten years, many doctors, technicians and expectant mothers had the moving experience of being able to observe the living fetus. This seems to me to have been a psychological break-through. For the first time, the human eye pierced the ‘black box’ of the womb.”

In 1976 only 35% of U.S. hospitals used ultrasound for fetal dating, but by 1982, almost all did. The technology also migrated into obstetricians’ private offices and clinics. The fetus was becoming more visible.

Meanwhile the pregnant woman, in popular images, and the reality of pregnancy as a symbiosis, became more invisible.

Real-time sonography became technologically commonplace, and maybe the visual curiosity of seeing how the machine worked or how a sonogram related to a pregnant woman’s body became less compelling. The frame was cropped and the focus zoomed in on the fetus itself. This cropping creates a powerful illusion of fetal non-contingency and autonomy.

The reproductive technology that Life presaged in 1965 mimics the arc of reproductive politics. Or, perhaps, the sonogram technology itself helped cause that arc to take shape, because the technology tends to crop out of view the reality that pregnancy is a symbiosis between a woman’s body and a fetus. And out of view, out of mind. As I’ve written, you get the strong sense that the pregnant woman is a nuisance third wheel in a pro-lifer’s relationship to a fetus.

As sonograms evolved, the fetus became more meticulously visible, while the pregnant woman’s body—the incubator— was visually cropped from view. The idea that a doctor or parent couldn’t see the fetus became an implied problem as the years and technology progressed. The uterus should be penetrable, and the fetus visible.

The upshot is that an in utero drama looks very ex utero and outer-space with ultrasound technology and the images it generates.

You’ve probably seen ultrasound pictures posted on Facebook. Rather than appearing deeply embedded in its mother’s body the fetus looks as if it’s an astronaut floating in deep, black space, tethered to the mothership (literally) by a lifeline.

Today, the cutting-edge technology is 3-D and 4-D real-time scans, first developed in their “stunning and convincing” detail (convincing of what is unclear) by the prototype Voluson scanner, in France.

These scanners take advantage of much faster computational speeds and lower computer technology costs. Otherwise, they wouldn’t have been a “viable commercial proposition,” or energetically pursued. 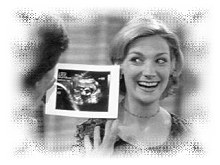 As in the beginning, the diagnostic benefits of more meticulous fetal visualization aren’t entirely clear. A Journal of Perinatology article questions whether 3-D sonography is a “luxury or a necessity?” and concludes that it was “becoming a necessity” for “every modern perinatal unit.” As with any other technology, maybe a hospital possesses it as reassuring certification of its modernity. The diagnostic advantages themselves don’t seem all that impressive. They’re almost more aesthetic and photographic. They include “surface analysis of minor defects.” Writes Goldberg, the dazzling and stunning 3-D imagery was “still of limited value to the fetus,” but it does provide “exquisite detail of the fetal face, limbs and genitalia.”

Parenting and health magazines write about “reassurance scans” and “entertainment scans,” mostly for the “pleasure” of the parents, and the “attraction” of being able to look at your baby’s face prenatally, even if there’s no diagnostic reason for it.

Doctors and vendors emphasized, peculiarly, the 3-D image’s capacities to affect the mother’s emotions. An early proponent of the 3-D scan saw it as an “important catalyst for mothers to bond to their babies.” A 1996 study that found mothers had more “incentive” to endure pregnancy complications and “improved capacity to cope” when they saw 3-D images. Another study in 1996 reported “improved bonding,” which could incent mothers to modify harmful pregnancy behaviors, and an “early bond” with the fetus.

The technology is valuable as a tool for emotional transformation and manipulation. The sonogram-enabled bonding through visualization also implicitly minimizes the bonding that happens through all the physical, non-visual experiences of pregnancy. In other words, the bonding that happens because a fetus is in a living woman’s (human’s) body. This is a basic but easily obscured biological, human reality in reproductive politics today.

A parenting magazine might enthusiastically imagine a mother epiphanally seeing her baby’s face in utero, but this same use of quasi-diagnostic technology for emotional manipulation occurs coercively in abortion politics.  Anti-abortion forces in some states have legislated that women be forced to undergo transvaginal probes and look at ultrasound images before an abortion. The womb with a view cuts both ways.

Related
High Culture
Did Paul Cézanne hide an early self-portrait underneath a 160-year-old still life?
To answer that question, we may have to figure out when the famed painter started to go bald.
Strange Maps
Dutch government releases a genuine treasure map from WWII, sparking a hunt for the loot
X marks the spot. The Dutch town of Ommeren has been swamped by detectorists armed with shovels looking for $20-million treasure.
Thinking
Creative wisdom from Rick Rubin: embrace your inner gatekeeper
Unlock the full potential of your creativity with “holistic detachment.” This is the way of the editor.
If money doesn’t buy happiness, you’re spending it wrong
These money experts say you can buy happiness. There are some red flags to look out for, though.
▸
7 min
—
with
Lindsay Bryan-Podvin
Starts With A Bang
The path forward for astronomers and native Hawaiians
A history of injustice and the greatest natural location for ground-based telescopes have long been at odds. Here’s how the healing begins.
Up Next
Surprising Science
Will New Smart-Device Replace Your Doctor?
A new handheld medical device that non-invasively measures your vital signs could replace visits to the doctor with digital diagnoses. The machine is modeled on Star Trek’s tricorder.