When I was a boy, my brother and I would always plan for the Perseid meteor showers by gathering snacks, lawn chairs that would lay flat, some chips and caffeinated sweet drinks to stay awake, and we’d shoot out the street light over our garage.

(Whoops … I mean, “that light would mysteriously go dark every August.” Ahem.)

We managed to see hundreds of meteors over the years, even though we were not in a remote area without light pollution.

Wanna see ’em, too? You’re in luck, because I’ve compiled a handy list of the showers yet to happen this year. But first, some questions you may have:

1) “What are meteorites and meteors?”

They’re the flotsam and jetsam of comets and asteroids that have come through the solar system — ice particles, dust, tiny rocks. Meteors are no larger than a grain of rice, and meteorites can be decent-sized rocks as large as 60 tons (!!). Those are the ones responsible for the huge, night-turns-to-day displays that can be accompanied by a loud BANG!

Meteor showers are largely predictable, while their larger cousins are pretty random.

2) “How come they appear around certain dates?”

The Earth passes through each flotsam/jetsam stream that is left behind as it makes its way around the sun each year. They’re at specific points in the earth’s orbit, so that’s why you can plan your meteor-watching calendar around certain times of year.

They’re usually no larger than grains of sand, so no.

Besides, when you see that thin line of light coursing across the sky, it usually means the thing is all burned up, 30 to 60 miles above the earth, leaving nothing behind but some gas and melted particles.

Not always, though. If one makes it to the planet surface, it’s called a meteorite, and they’re very collectible.

4) “OK, you’ve sold me on this idea. When are the meteor showers this year?”

Meteor showers are named for the constellation in the night sky that the meteors seem to be coming from (though they can show up anywhere in the sky). Here they are for the rest of the year:

Peaking July 28 and 29, the two groups of comets responsible for this debris cloud are named Marsden and Kracht, which are known as “sungrazers.”

Expect about 20 per hour, so not that fabulous, but still … just look up on those evenings and see what you can see. It actually begins July 12 and ends August 23, but for most of us, the peak time is the best for watching. The moon will be a factor in drowning out the faint trails, but some bright ones should shine through. 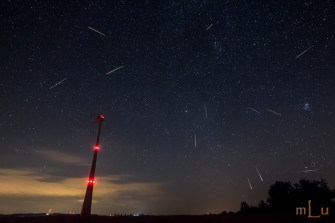 The comet Swift-Tuttle, first recorded in 1862, is responsible for this display, which can reach 60 meteors per hour. It’s one of the 2 most well-known meteor showers (and the one that my kid brother and I would belly up for every year, sans street light …)

Usually fabulous, the peak is the night of August 11 and the morning of August 12. Moonset is around Midnight of August 11 this year, so from then on should be really good. The shower actually begins July 17 and lasts until August 24, so you might see a few here and there on any of those days.

This one is not nearly as well known, and produces a lot fewer meteors, but it’s one that can be seen in the early evening. Comet 21P Giacobini-Zinner is the guilty party for this display. Expect at peak on October 7, maybe 10 an hour. It runs from October 6-10.

This one runs a full 5 weeks, from Oct. 2 to November 7, but the peak is the evening of Oct. 21 and the morning of Oct. 22. About 20 per hour, it’s from dust left behind by one of the most famous comets, Halley. The Orionids can be brighter than other meteor showers, so it might be worth a look.

So that’s your Summer and early Fall meteor showers, where you’ll need nothing more than a chair and a snack. Well, and the ability to take a nap the next day.

And then, if you can stand the cold:

The Taurid meteor shower is unique in that it’s actually the result of two separate celestial bodies passing through our solar system; Asteroid 2004 TG10 and comet 2P Encke. It runs a full 3 months, from September 7 to December 10, with the peak on November 4. Expect 10 per hour. 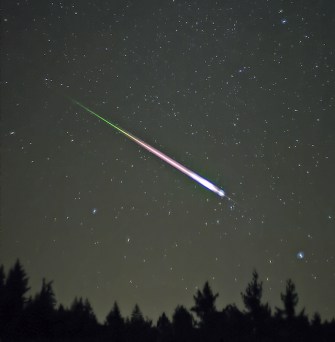 Comet Temple-Tuttle is the one that left these particles behind. It has about 20 per hour, but there’s also a cycle every 33 years when hundreds per hour can be seen; the next time that happens will be the year 2034. Peak is the night of Nov. 16 and the morning of Nov. 17, and it runs from November 6 through 30. 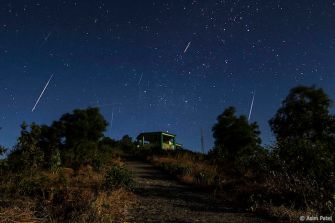 This one is the one to see, aside from the Perseids (and that one, because it’s Summer, of course!). Hundreds per hour can be expected, and there have been known to be meteors of many colors. Comet 3200 Phaethon is the one responsible for the dust cloud here, and we thank it!

December 7-17 is when it happens, with the peak the night of Dec. 13 and the morning of Dec. 14. The full moon will mean the lesser ones will not be visible, but the Geminids produce such bright and varied light trails that it should still be a fabulous show.

From comet Tuttle, the Ursids are not very plentiful at 5 to 10 an hour. They run from December 17 to Dec. 25, but the peak is right at the Winter Solstice mark, the night of December 21 and the morning of December 22.

To get a chance to see any or all of these meteor showers, it’s best to get away from city lights.

Over a body of water could help (as long as it’s not all lit up) because you get a much larger field of view instead of trees and buildings blocking your view. Or, find an area with an observatory, or even just wide open spaces and farm fields.

OK, stargazers who love meteor showers, you’re set for the rest of the year!

Now just hope the cloud cover doesn’t block them all out. Womp womp.

Related
13.8
The weirdness of quantum mechanics forces scientists to confront philosophy
Though quantum mechanics is an incredibly successful theory, nobody knows what it means. Scientists now must confront its philosophical implications.
Neuropsych
Why is a Starbucks loyalty rewards program making customers so angry?
The rewards price to get a free cup of hot coffee at Starbucks is going up.
Empowering growth
7 essential management training topics for every team leader
From emotional intelligence to problem solving, these management training topics will set team leaders up for success.
Thinking
What if you could rewire your brain to conquer suffering? Buddhism says you can
For Buddhists, the “Four Noble Truths” offer a path to lasting happiness.
Hard Science
Solved: 500-year-old mystery about bubbles that puzzled Leonardo da Vinci
The solution involves the infamous Navier-Stokes equations, which are so difficult, there is a $1-million prize for solving them.
Up Next
Surprising Science
Some tropical fish can recognize human faces
It’s a pretty impressive feat.