In 2008, in exchange for the billions of dollars they needed to stay in business, General Motors and Chrysler agreed to accelerate deployment of more fuel efficient technologies in light vehicles: cars, pickup trucks, vans and SUVS. Ford and other automakers followed suit to remain competitive for customers who, in those lean economic times, were looking to save a buck wherever they could, including at the gas pump.

It was a little-noticed step to reduce air pollution and combat climate change that the Obama Administration and Congress still don’t get enough credit for. And it seems like they deserve a huge amount of credit when you count up the carbon dioxide emissions prevented by those MPG increases. Michael Sivak and Brandon Schoettle of the University of Michigan’s Transportation Research Institute have done those calculations, and the numbers seem to offer great hope. (1)

Between October 2007 and September 2014, the average fuel economy of light vehicles in the U.S. has increased 25%, from 20.1 MPG to 25.3. That gain has saved American motorists a total of 15.1 billion gallons of fuel and prevented the emissions of 297 billion pounds of CO2. In September of 2014 alone, increased fuel efficiency in light vehicles saved 614 million gallons of fuel and 12 billion pounds of CO2 emissions. 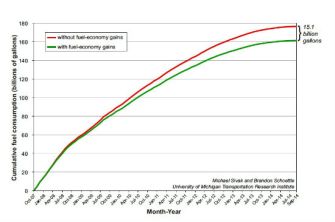 Anyway you look at it, this seems like great environmental news: better fuel efficiency reduced local air pollution caused in part by vehicle exhaust and emissions of heat-trapping CO2 that contribute to global climate change. Great news indeed—except in the full context of climate change.

According to the U.S Department of Energy, for the same time period, total U.S. CO2 emissions were 77 TRILLION 56 BILLION (77,056,000,000,000) pounds of CO2. Those seemingly huge savings from vehicle fuel efficiency cut the nation’s CO2 emissions by a little over one third of one percent.

Okay, the math lesson is over. But the meaning of these numbers needs to be recognized. If we’re going to reduce CO2 emissions in any meaningful way in order to slow the warming of the earth’s climate and minimize the severity of the changes to the biosphere that such warming will cause (some of which are already occurring), tinkering around the edges with things like increased fuel economy in consumer vehicles won’t get it done.

A fundamental shift has to happen in the way we make electricity. And since the global climate doesn’t particularly care where the CO2 comes from, that shift in energy production must be global, and it can’t just be in the U.S. or Europe or other developed nations. It also has to happen where energy demand is going to grow the most in the coming decades, the developing countries like China and India and Brazil and Indonesia and across Africa, where billions of people aspire to the air conditions and refrigerators the developed world already has.

In those places, wind and solar just won’t be enough. Studies find that even if solar panels and windmills were installed everywhere they can be, they couldn’t supply to the average citizen of a developing nation close to the amount of power that people in rich countries now enjoy. So to be fair, either the rich world scales back its standard of living, which is highly unlikely, or we have to do more than capture the wind and the sun.

Which means the biggest way to limit the extent of climate change is to change the economics of power generation. In addition to incentives and policies that help make solar and wind and energy conservation cheaper (we might as well use what we produce more efficiently), carbon dioxide emissions have to start to cost businesses and consumers real money, real enough money to make cleaner sources of power economically competitive.

Opponents denounce such policies as draconian and ruinous to the economy, although they can be close to cost neutral to power consumers like you and me. But it will cost the fossil fuel industry a huge amount of money since they have paid billions for a lot of oil, coal, and gas reserves and won’t get their money back unless they extract and sell it. This is of course why those extraordinarily influential businesses are fighting to maintain the energy economy status quo that is a root cause of climate change.

So, sorry, all you Prius drivers (we have one in my family). Sorry, all you passionate protesters during climate week. Climate change is just far sweeping a problem for things like increased vehicle fuel economy and LED light bulbs to solve. And it’s too big to hope that a true worldwide social movement can rise up with enough speed and force to drive this kind of change. Either the world’s political and business leaders have the wisdom and courage to recognize that it is in their and the planet’s long-term interest to change basic energy economics, or the already stark predictions about the impacts of climate change are going to fall short of just how bad things are likely to get.

(1) For a copy of the report, you can contact Michael Sivak at [email protected]

Related
Neuropsych
Psychology studies that go viral are likelier to be bogus
A new 20-year analysis of over 14,000 psychology studies finds that a study’s media coverage is negatively linked to its replicability.
The Future
How a device transmits radio waves with almost no power
Apart from the energy needed to flip the switch, no other energy is needed to transmit the information.
The Present
Radical idea: Redraw the U.S. map as a nation of city-states
While cities drive national economic growth, their political geography means they cannot effectively deal with inequality, poverty, and other socioeconomic problems.
The Learning Curve
Why do high IQ people stagnate in their careers? Emotional intelligence
Research suggests that emotional intelligence is more vital for success than IQ.
The Present
Even in the age of AI, some problems are just too difficult for computers
Computers are growing more powerful and more capable, but everything has limits
Up Next
Surprising Science
Is Marijuana Legalization Good or Bad For the Beer Industry?
Some industry prognosticators question whether legalized weed will compete with alcohol for Americans’ tightening recreation budgets.