Editor’s Note: This article was provided by Demythify. The original is here.

My friend leaned forward over the table where we were having dinner. It was a loud, busy restaurant, but she lowered her voice conspiratorially and her eyes took on a sheen of excitement, tinged with fear. “I accepted a position working with a non-profit in the South American rainforest after I graduate, but I haven’t told my professor yet. If I already have a job lined up, he can’t stop me, right?”

At first I considered this apprehensive attitude to be unique and maybe unwarranted. Why wouldn’t a Ph.D. student want to tell her professor about such a unique job opportunity? However, over time, I saw this scenario as a recurring theme and not without reason. Classmates were told that they would not be allowed to pursue non-academic opportunities. Professors scorned the idea of being a “bench monkey” at a private biotech company. Internship programs advertised to us during our Ph.D. interviews were quickly retracted and made to disappear as soon as any real interest was shown.

After entering a Ph.D. program, it quickly became obvious that when in academia, the only respectable job is considered to be — you guessed it — academia. Becoming a research professor is typically considered the holy grail for Ph.D.’s in the sciences. Certainly, one can see how the position is an honorable one. To dedicate one’s life to the pursuit of science and discovery, for the sake of knowledge. And with tenure appointment comes the freedom to pursue the answers to the questions you care about, instead of the questions the stockholders of a company care about.

However, I have major issues with the view of academia as the be all and end all of science careers. The drive by the U.S. to produce more scientists began around 1940-1950. Spurred by events such as the Manhattan Project and later the Space Race, increases in funding for science and technology drove a perceived need for more scientists. More recently, reports and testimony from the likes of Bill Gates have continued to encourage the production of more scientists (1, 2). Nevertheless, as numerous recent articles have warned, the population of science Ph.D.’s is steadily growing, while the number of available faculty jobs increases at a pace only a snail could envy (1, 2, 3, 4). 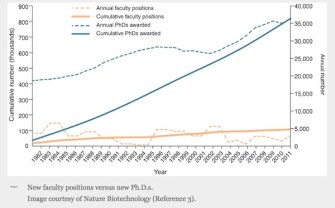 As a result, the competition for faculty positions has become incredibly competitive, and Ph.D.’s end up languishing in post-doctoral positions for upwards of 10 years, many never attaining professorship. Yet, instead of universities taking precautions and actively educating their students in a way that would provide them with the skills to be competitive in job markets outside of academia, these institutions continue to maintain a traditional instructional framework (5). While a Ph.D. program provides experience in skills such as project management, problem solving, and communication, students still come out with a very narrow window of extremely specialized knowledge and techniques that are often not transferable to the job market (6).

What can schools do to produce more well-rounded Ph.D.’s? Progress would be to offer courses that would train students in a wide variety of techniques. This would make them more attractive to potential employers. Additional courses in broader topics such as writing and business would also be beneficial (6). But classes can only provide limited experience; direct, hands-on training is also vital. Therefore, departments should also provide infrastructure and support that provides opportunities for internships and co-ops in a range of companies.

With plunges in federal funding for science research and increases in the number of people earning their Ph.D.’s, advances in science may need to come from sources such as private research facilities like Seattle’s Allen Brain Institute. Other groups, such as Microryza and Sage Bionetworks, have started taking advantage of public interest and participation for funding and brainpower. It is becoming clear that traditional research is turning into a broken system.

I think it is time for a change of attitude towards acceptance of non-academic careers. Progress begins with the professors; they must become more open-minded to students’ pursuit of alternate career opportunities. This includes allowing them to devote some of their time to cultivating skills and relationships that will provide a solid foundation upon which to find the right job after graduating. Students, like my aforementioned friend, should not have reservations about discussing their job future with their professors.

In the dynamic job market for scientists where there is an increasing amount of competition for fewer academic positions, it is important for both professors and departments to provide support for their students. This includes changing the general attitude towards jobs that are not in academia, and providing programs that give students opportunities to gain skills and experience that will help them have a fulfilling career in science.

What is my next step towards finding my ideal job? Telling my professor I don’t want to be like him…

Amanda Chung is a pharmacology Ph.D. student at the University of Washington.

Related
The Present
How heat pumps of the 1800s are becoming the technology of the future
Innovative thinking has done away with problems that long dogged the electric devices — and both scientists and environmentalists are excited about the possibilities.
Starts With A Bang
JWST’s hunt for most distant galaxies gets double boost
Along with gravitational lensing and ALMA’s incredible long-wavelength spectroscopy, JWST is reshaping our view of the early Universe.
Thinking
Finding your essential self: the ancient philosophy of Zhuangzi explained
Adopting a healthy scepticism towards inherited ideas means “emptying the container of the Self.”
The Future
Startup’s bladeless flying car is designed to reach Mach 0.8
One of Jetoptera’s VTOLs is expected to reach speeds of around 614 mph, about as fast as a commercial jet airliner.
Health
New blood types are often discovered following medical disasters
New blood types are regularly discovered by an unusual absence or an unusual presence — both of which can result in tragedy.
Up Next
Words of Wisdom
John Dos Passos on Career Choice
“People don’t choose their careers; they are engulfed by them.”- John Dos Passos (born on this date in 1896)