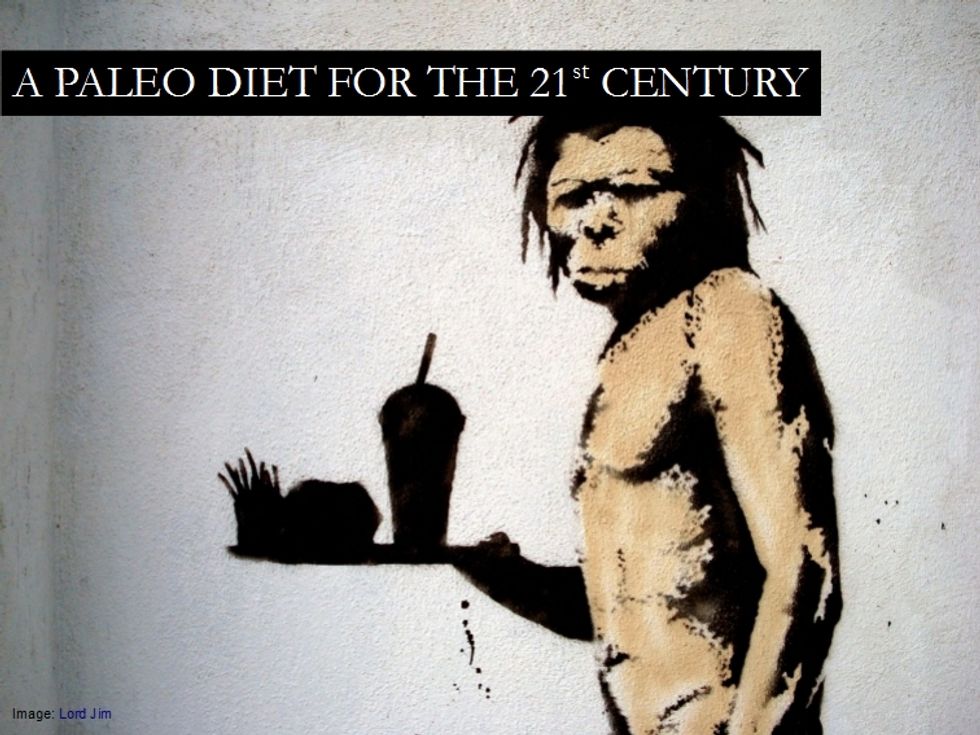 If you accept the notion that no one knows what to eat these days since they're bombarded with conflicting nutritional advice at every turn, then the several hundred people who attended this past weekend's Ancestral Health Symposium in Los Angeles must be an exception to that as they seem to have a handle on it.

By now you've heard of the Paleo Diet or the Caveman Diet, what Details magazine called one side in "an epic struggle" underway between "meat lovers and vegans." It generally refers to eating like our hunter-gather ancestors (and more recent tribes) who ate animals and vegetables - but little or no sugar, grains, legumes, vegetable oils or dairy (though many people prefer to ignore that last one) - and apparently weren't affected by obesity, diabetes, heart disease, cancer etc.

If it's known in the mainstream as yet another fad lifestyle favoring Atkins-sized portions of meat, lifting heavy things, and barefoot running, many of its practitioners aren't in it just for the grass-fed steak. They see it as a way to fix the planet, to make up for the processed food and the factory farming that has been our gift to the world along with pop culture and Levis.  So while in some sense this was indeed a Comic-Con for the Vibram FiveFingers set, it was also a remarkable sign of our times.

Having just arrived in Southern California from an extended stay in Vietnam provided me with a perspective of the two ends of the eating spectrum.

In Vietnam, they eat healthily without even trying. They're rightfully proud of their customary cuisine in which every meal includes a balance of vegetables, meat and white rice. They have holidays where specific bitter or fermented foods are eaten to cleanse the system (though such foods are eaten regularly too). Sure, junk food is consumed, but at a level probably similar to that of the '60s or '70s in the U.S.

However, some Vietnamese people have started to accept both the standard Western thinking on nutrition, i.e. the low-fat, whole grain approach, and the Western reality of fast and processed foods. What's more, just like in the U.S., most of the meat consumed there is not from the local farm, it's from factories using feed imported from American agribusiness giants like Cargill. How else to feed a nation of 87 million people?

Back in the USA, at the other end of the spectrum, where the factory farm was invented and continues to thrive, there are, ironically, people who want to answer that question.

This is not exactly news, and it's not limited to this group: we're familiar with Whole Foods and Michael Pollan (whose The Omnivore's Dilemma I've just gotten around to reading). I'm not going to get Jack Shafer on my case by saying that Paleo eating is a "growing trend" but it does seem to have taken off in the past year and a half that I've been following it – and employing it to end several years of quasi-veganism that left me rather malnourished.

So this event, organized by two California-based researchers, was an opportune chance for nutrition big-wigs and popular bloggers alike to mingle with each other and those they influence. Held at UCLA, but not by UCLA, it mixed the scientific ("Heart Disease and Molecular Degeneration," presented by doctoral candidate Chris Masterjohn) with the practical ("MovNat: Evolutionarily natural fitness" by Erwan LeCorre).

Loren Cordain, PhD, was there to talk about the movement he helped popularize with his first book in 2000. Authors such as Michael Eades, MD, Mark Sisson and Robb Wolf put live faces to their own influential diet books. Health issues like the increasingly understood importance of good gut flora was touched on in presentations by bloggers Dr. BG (with Dr. Tim Gerstmar), and Melissa McEwan. Denise Minger, famous or infamous in certain circles for her in-depth statistics-heavy take-down of T. Colin Campbell's The China Study was a popular presenter. Paleo author Nora Gedgaudas was one of several to talk about the dangers of gluten but the only to advocate the less-popular approach of caloric restriction as the best bet for health and longevity.

There were also luminaries from the low-carb world. While not a low-carb protocol per se, Paleo's grain-free and sucrose-free approach makes it lower-carb by default so the conference was a natural fit for Dr. Robert Lustig, subject of the recent New York Times Magazine cover story by Gary Taubes, "Is Sugar Toxic?"

Lustig took the opportunity to re-state his answer to that question, explaining that insulin "makes you feel like crap" and "determines which way the glucose goes" - to you, for energy, or to your fat, for storage. This was probably not a new idea to anyone in attendance but his controversial twist on it is that this process should work fine unless a specific, nefarious sugar, fructose (consumed in excess beyond whole fruits), has already wreaked havoc with your liver and made you insulin resistant - which puts you on the path to the diseases of modern civilization. Meaning that the fructose half of a sucrose molecule is the baddie and the glucose half is the good guy? "It's not that glucose is good, it's just that fructose is bad," he said. "You have to eat a lot of glucose for it to contribute to obesity."

Yet this wasn't a conference about fine-tuning the South Beach Diet, or even The Paleo Diet, It really was about eating and living with a certain awareness.

Part of it was semantics. Organic chemist Mat Lalonde was squeamish about the scientific soundness of saying that hunter-gatherers were healthy so we ought to follow their diet. He preferred a more careful, evidence-based wording that talked more about the idea that we may not be genetically well-adapted to eat certain foods.

Then there's the addition of the phrase "Ancestral Health" to the Paleo lexicon: "Paleo in the sense of the Paleolithic period implies something static about our past, as if we need to look to one specific period of time to understand ourselves rather than to focus on our continuous history and our emerging future," Masterjohn blogged after the event.  "Ancestral, by contrast, allows us to put as much of an importance on our grandparents as on our (great)345-grandparents, and to trace the emergence of genomic, microbiomic, cultural, and technological evolution that has occurred continuously through our history."

Author Wolf cautioned against dogmatism, saying that people should try being a vegan for a month, to see if that works for them, the same thing he advises for his own diet.

But if the evolution-based approach is truly an answer to our nation's health problems, how long before more people get the message? How long will the message take to get all the way around the globe to Vietnam, where an English student of mine was getting her nutrition advice, she said, from the U.S. government? Hopefully sooner rather than later. More and more, the rest of the world is eating like America. So we'd better shape up.

Check back in the coming days for a few more guest posts about some of the interesting moments from the symposium including "Where is Darwin on Dentistry?" and "How to Win an Argument with a Vegetarian," as well as an interview with Paleo author Nora Gedgaudas on diet and mental health.