Two Important Arguments from Both 'Sides' of the Gun Debate

The argument over guns is a complex topic, but we ought not to dismiss arguments because they do not square with our gut feelings – regardless of whether we want more or less guns, more or less laws. 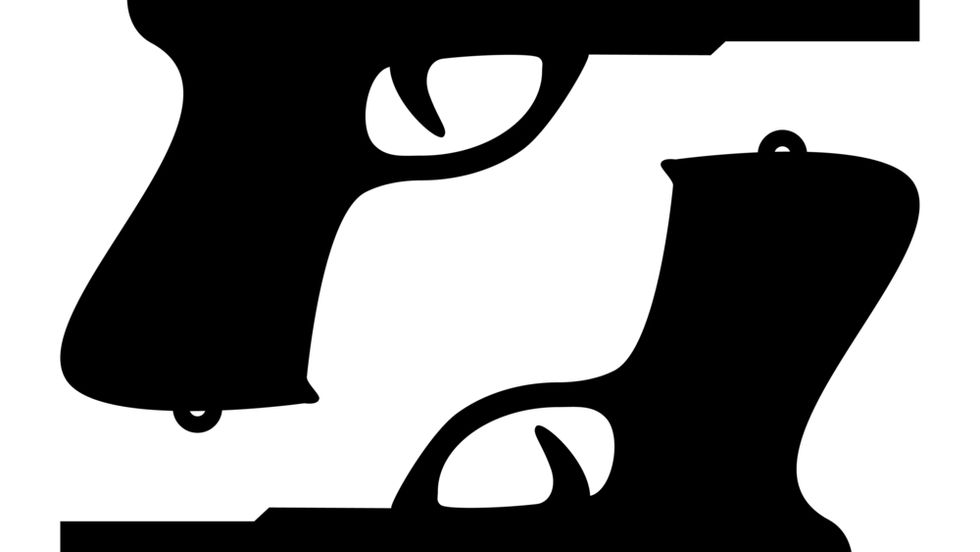 Like any subject that weaves its way round corpses, gun control discussions easily ignite the worst parts of us. Whether it’s descent into name-calling, insults, ad hominems and similar lazy, childish tactics, or a dismissal of anyone other than those on “our” side, attempts at objectivity are often scarce. However, many of us, including myself, are in the advantageous position of ignorance: it is advantageous, since it means we have no excuse not to encounter and contemplate the best arguments on both “sides” of the debate.

To that end, I want to highlight two potent arguments I’ve encountered from two individuals who, more than likely, would disagree to large extents on gun control in the US.

I say “sides” because I’m very hesitant to portray sides in debates: important discussions are often more complicated than such a binary placement asserts. No one wants more innocent people dead; no one wants more children firing off guns in their home, killing family members. The difference depends on specific items of policy. These arguments highlight precisely this and, I hope, will show that indeed the “other side” do not comprise a set of evil, irrational individuals (there might be a few, but we’d be bad thinkers to assert that everyone who wants less gun control is a crazy, sky-shooting cowboy).

I’ve previously argued that individual liberty only has meaning if one is allowed to, basically, willingly destroy one’s own body. That means, as long as you are not harming non-consenting others, you should be free to smoke, drink, even amputate your limbs – and, indeed, kill yourself. All of these come with caveats, of course: we might be ignorant to the extent such self-destruction might really have (on others). However, the larger point is not the encouragement for adult citizens to slowly destroy their bodies but the recognition that this civil society respects your autonomy, your personhood, to the point that, if you wish to harm yourself, such respect remains.

Freedom of speech similarly applies: we should be able to express even the most offensive of speech, without worry that mere offence is sufficient reason to stifle us (there might be other, better reasons to prevent it, based on legitimate concerns of harm). Under the guise of PC or “public morality”, citizens are prevented from writing, acting, or expressing themselves, undermining the freedom not only of these artists, but of the audience too, in that their freedom to decide to be an audience is already prevented.

When the State starts deciding what is and isn’t good for you, when it begins acting upon paternalistic grounds, then we ought to start worrying. Freedom only means something when we’re free to act stupidly (again, all with caveats), when we’re free to express ourselves.

Guns, however, change this dynamic entirely.

In the New York Times, Firmin DeBrabander argues that individual liberty is completely undermined by allowing citizens to wield guns.

“Guns pose a monumental challenge to freedom, and particular, the liberty that is the hallmark of any democracy worthy of the name — that is, freedom of speech. Guns do communicate, after all, but in a way that is contrary to free speech aspirations: for, guns chasten speech.”

Those who long for a gun on every citizen would encourage an enforced “polite” society “precisely because guns would compel everyone to tamp down eccentric behavior, and refrain from actions that might seem threatening.” We would “walk gingerly — not make any sudden, unexpected moves — and watch what we say, how we act, whom we might offend.” A person who brandished a weapon would already be communicating that the conversation is over: there can be no discussion with such a person at all. The fullstop is in the barrel and he’s willing to show you, if you decide to challenge him.

Free speech and expression can only exist with the knowledge that non-violence will be the response. But guns, by definition, would change that. DeBrabander asks us to imagine what would have happened had the non-armed Zuccoti Park protestors carried weapons when the police stormed.

Against such powerful points, gun control advocates assert that by undermining our ability to arm, we allow complete government despotism a greater chance of reality. By being armed, we can stand up to a regime of control. But this encourages an extreme individualism, not a coherent community – since we are not asking for a select group of trained individuals to be the only and trusted bearers of arms, but everyone. This is a distrust of community, since gun control advocates are saying as soon as we allow one group guns (army, police, etc.), the rest of us open up to servility under their armed hands, pulled by the strings of their master (the government).

Citing Foucault, DeBrabander points out that “nothing suits power so well as extreme individualism”. After all, this makes it easier to take control, since instead of a large opposing group, you have many disparate, self-regarding opponents. Thus, instead of aiding liberty against a powerful state, it aids a powerful state in taking more liberty.

But there is reason to consider the importance of being armed, as Sam Harris highlights.

Argument 2.0 Guns Can Protect in a Violent World

A popular argument from gun rights advocates it that if you make gun ownership a crime, then only criminals will have guns. This means only “bad” guys would have guns, while good people would by definition be at a disadvantage. There are various responses to this: who decides who’s a “good” or “bad” guy; even in the hands of innocent people, guns can escalate a crime situation unnecessarily; due to the insane nature of attacks, robberies, etc., one will not act like a John McClane but more like a quivering mess, which is the worst mindset to be in when holding a powerful weapon.

Thus, would it not be better to regulate guns more effectively, instead of getting rid of them altogether? Criminals will get hold of guns – indeed, by definition, if guns are outlawed, one becomes a criminal just by acquiring one – and leave non-criminals more vulnerable than ever. I’m not certain outlawing all guns is the solution, because of this. It doesn’t, however, mean we should all be armed, but I don’t know how to square that at the moment.

But Sam Harris goes further and correctly so: He doesn’t wish for a world without guns at all. According to him, people who wish for this do not understand violence or its nature. “A world without guns is one in which the most aggressive men can do more or less anything they want. It is a world in which a man with a knife can rape and murder a woman in the presence of a dozen witnesses, and none will find the courage to intervene.” The Kitty Genovese case comes to mind, where bystanders only watched while a young woman was brutally murdered. Would a gun have helped? Perhaps.

Harris undermines the rebuttal that these situations are sudden, shocking and thus would mean good people shooting recklessly.

“The liberal commentariat seems to have no awareness of what “well-trained” signifies. It happens to include an understanding of what to do and what not to do when the danger of shooting innocent bystanders exists. The fact that bystanders do occasionally get shot, even by police officers, does not prove that putting guns in the hands of good people would be a bad idea. Gun-control advocates seem always to imagine the worst possible scenario: legions of untrained, delusional vigilantes producing their weapons at a pin drop and firing indiscriminately into a crowd.”

Harris here is calling for better and more training; better laws, not all-encompassing and totally restrictive ones.

As many have pointed out, this still doesn’t undermine the data indicating guns increase chances of death – even when kept at home – and so on. The usual retort that risk is everywhere might be boring to hear, but remains true. Yes, guns are “designed” for killing whereas knives are not, but that doesn’t mean you can’t have incidents of knife-attacks. Guns can level the playing field, especially for women - who are often the targets of violent crimes from more powerful opponents. Says Harris: “A world without guns… is one in which the advantages of youth, size, strength, aggression, and sheer numbers are almost always decisive. Who could be nostalgic for such a world?”

I do not know where I stand. However, assuming Harris’ data is correct, that only “good” people acquired guns, were well-trained, regularly checked on by independent bodies (the same way we are tested for drivers, etc.), and such, I see little problem with gun ownership. But, the problem is deciding who should and should not own guns; the undermining of liberty if it is given to all citizens; the danger to free speech and liberty when held by anyone; that even “good” people can become enraged, drunk, etc., and easy access to a gun can escalate a mere drunken brawl to a murder spree.

This is a complex topic, but we ought not to dismiss arguments because they do not square with our gut feelings – regardless of whether we want more or less guns, more or less laws. By outlining two important arguments, we can see that reason does exist. Even if both are wrong, we can show this without recourse to name-calling, Strawmanning and caricature. A debate and discussion must be had, since discussion can aid us in achieving the goal we all want: a world with less violence or, more realistically, one where fewer innocent people die. If guns aid or hinder that goal, we will figure that out by having a proper conversation, not a mud-slinging contest, regardless of which “side” you are on.