William Etty: The Most Controversial Artist You’ve Never Heard of 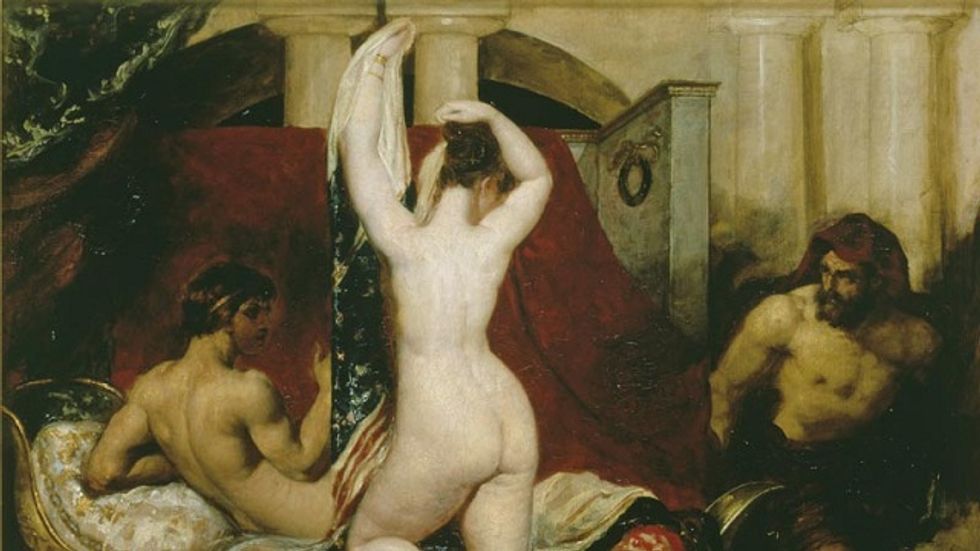 His statue has stood outside the York Art Gallery for a century now, but most passersby don’t know the name of William Etty or the works that once made him York’s most famous and infamous native artist. In the exhibition, William Etty: Art and Controversy, which runs through January 22, 2012 at the York Art Gallery, the nudes that brought lavish praise and vicious criticism upon Etty’s head stand for inspection before a new generation. As the curators and essayists of the catalog revisit the old controversies that seem quaint now, they also reveal a different side of Etty that makes him a controversial figure for today.

“Indeed, with the possible exception of [J.M.W.] Turner, no other British artist in the first half of the nineteenth century divided opinion more vehemently and consistently,” curators Sarah Burnage and Mark Hallett write in the catalog introduction. Whereas Turner changed how people saw, Etty wanted to change what people saw. Etty broke the rules of decorum by painting humanly realistic nudes rather than idealized gods and goddesses. Most of the criticism questioned the appropriateness of Etty’s female nudes, while the male nudes quite often found praise as “heroic.” Tragically, the critics got personal in their comments, essentially charging Etty with deliberately trying to corrupt the viewing public. “He is a laborious draughtsman, and a beautiful colourist,” one critic began innocently enough, “but he [Etty] has not taste or chastity of mind enough to venture on the naked truth […] we fear that Mr. E will never turn from his wicked ways, and make himself fit for decent company.” “[T]he spectator can see in [Etty’s female nudes] nothing beyond the portrait of some poor girl who was necessitated to sacrifice the feelings of her sex for bread,” another critic accused. “Nudity is all that the artist has to show us, and when unassociated with anything like incident or sentiment, the spectacle is offensive.” Etty defended himself as an innocent lover of nature’s greatest creation—the human form. Even after evoking the Biblical phrase that “to the pure of heart all things are pure,” Etty’s explanations fell on deaf ears. (The curators collect many of the cruelest attacks in a mock newspaper, The Etty Express, which can be viewed here, here, here, and here.)

Etty fell in love with the human form in his pursuit of life studies while a student at the Royal Academy schools. Sir Thomas Lawrence called Etty “a Child of the Royal Academy, educated in it–Its most assiduous Student.” In his catalog essay, Martin Myrone sees Etty’s fanaticism as rooted in his humble beginnings in York. “His academic dedication emerges, in that light, as a consequence of a specific social trajectory through the art world,” Myrone writes. The poor boy from York painted copied “memorials” honoring heroes such as Titian, Rubens, Poussin, Reynolds, and Lawrence. Etty’s “approach to them was one of humility, always seeking to learn, and never, unlike Turner, to compete,” Richard Green writes in an essay on “Etty and the Masters.” Rather than anxiety of influence, Etty found good company with the greats of the past. Unfortunately, critics claimed that Etty’s emulated the worst elements of the Old Masters—the dirty bits that marred Titian and Rubens, for example.

Why did Etty court disaster when what he wanted more than anything else was to belong to the pantheon he lovingly copied again and again? It’s hard to say, but something made him defy convention at the same time he wanted to belong to the establishment of the Royal Academy. In Candaules King of Lydia, Shews His Wife by Stealth, which Etty exhibited at the Royal Academy in 1830, Etty retells the story from Herodotus of King Candaules, who allowed Gyges, one of his generals, to watch secretly as his wife disrobed for bed. Candaules’ wife repaid him by conspiring with Gyges to kill him. “With her back to the audience, Etty ensures that spectators are complicit in this act of betrayal and are similarly implicated in the role of voyeur,” Sarah Burnage writes in her sharp analysis of the painting. “Indeed, with its narrative of deceit, exploitation, voyeurism and vengeance, there was something explicitly provocative about Etty’s choice of Herodotus’s narrative.” By picking a story with no clear, redeeming, moral message, Etty invited all the criticisms he claimed were untrue.

It’s this seemingly self-destructive, split personality that makes Etty fascinating beyond the two-dimensional portrayal of your typical controversial artist. In her essay on Etty’s 1840 painting The Wrestlers, Sarah Victoria Turner argues that Etty’s depiction of a white wrestler grappling with a black wrestler is “an ambiguous image in which numerous juxtapositions and contrasts (black/white, hard/soft, violence/intimacy) are dramatically spotlit for the viewer to contemplate.” Painted in the same year as the World Anti-Slavery Conference in London and Turner’s The Slave Ship, Etty’s wrestlers battle on a human scale the larger conflicts of imperialism and racism. With such analysis, Etty emerges as more than the painter of pretty faces and sexy bodies.

The concluding essay of the catalog, “Queer and Now: On Etty’s Autobiography’ (1849) and Male Nude with Arms Up-Stretched (c. 1830)” by Jason Edwards, employs queer theory to “examine through a celebratory lens, rather than write from a position that seeks to pass negative judgment on so-called queer sexualities” in Etty’s art and life. Edwards remarks on the irony that the male nudes that critics let pass in Victorian times are now the center of the homoerotic critiques of today. “[W]hen read with a ‘queer eye’ for a supposedly straight guy, there is plenty of evidence” of Etty’s homosexuality, Edwards shows. Even the life study studio where Etty allegedly toiled diligently for his craft becomes “a deliciously multi-sensory, erotically-embodied experience for the painter and his peers” in Edwards analysis, bringing whole new colors to Etty’s seemingly drab existence.

“I never meant to seduce,” Etty claimed. In William Etty: Art and Controversy, Etty seduces a new generation not only with his stunning technique, but also with the ideas beneath the surface. Like all the scholars involved in this exhibition, Edwards “comes out” as an Etty appreciator and “runs the risk of being identified as someone with risible taste.” It’s easy to bash Victorians for bashing nudity, but, as Edwards points out, contemporary disdain for Etty’s “still widely-ridiculed history and Orientalist paintings” shows our own blind spots. William Etty: Art and Controversy is truly about art and controversy, reminding us of controversies that once set tongues wagging and of the art that deserves to be seen and judged on its own merits.

[Many thanks to the York Art Gallery for providing me with the image above and a review copy of the catalog to the exhibition, William Etty: Art and Controversy, which runs through January 22, 2012.]