Why All Kehinde Wiley Wants Is the World 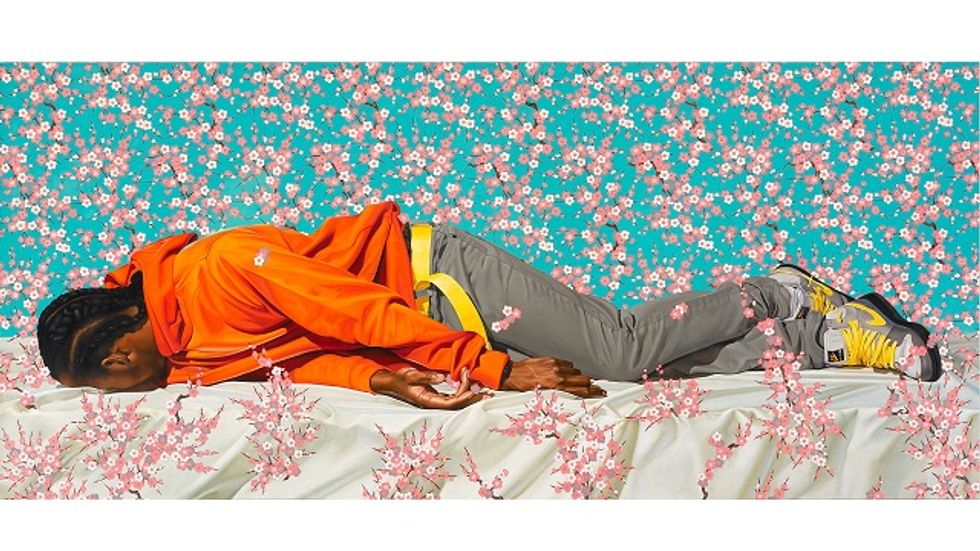 When does an artist become a phenomenon? It’s a rare moment on the scale of seeing a new star emerge in the night sky. Already a rising art world star, American artist Kehinde Wiley seems poised now at the age of 35 and after just a little over a decade of work to take the next step and really heat things up. With not one but two big New York City exhibitions, a featured appearance on a hot new album cover, and the kind of retrospective, lavishly illustrated, critically evaluative monograph that seals the deal, Kehinde Wiley has the whole world in the palm of his hand, and that’s exactly what he wants.

Born in 1977 as the youngest of six children to a single mother, Wiley grew up facing hard economic times but also enjoying the intellectual stimulation of having a mother in academia. Looking for a way to keep Kehinde occupied, his mother enrolled him in art classes, including some at the Huntington Library, where he could study portraits such as Thomas Gainsborough’s famous Blue Boy. After graduating with an MFA from Yale in 2001, Wiley became artist-in-residence at the Studio Museum in Harlem, where he witnessed a steady stream of young African-American men walk past in full hip hop regalia. Joining the old school world of portraiture with this new school of personal style, Wiley developed the unique subject matter and approach that has been a popular and critical success since.

In Kehinde Wiley, the first monograph dedicated to Wiley’s career as a whole (published by Rizzoli USA), Thelma Golden, chief curator and director of the Studio Museum in Harlem, introduces the volume by remarking that she “was in conversation with Wiley before I ever spoke to him.” Wiley’s work touches on “the politics of representation; the power of art history; the veracity of images; notions of authorship, identity, and culture; the critical nexus of race and gender in contemporary art,” Golden lists—all things that she and nearly all contemporary art critics think deeply about. This combination of Wiley’s thought provoking practice and stunningly beautiful paintings makes him irresistible to both the high brows and those simply wanting to enjoy the show.

In addition to capturing visually Wiley’s bravura brushwork and vast range of visual inventiveness in 275 color illustrations (including some gatefolds), the contributors Kehinde Wiley dig their critical teeth deep into Wiley’s art and come away with a mouthful. Art historian Robert Hobbs provides a detailed biography not just of Wiley’s life but of his thought, mapping mental landmarks ranging from W.E.B. DuBois and Henry Louis Gates, Jr., to Michel Foucault and Jacques Lacan. Hobbs sees a kind of “conceptual realism” at the heart of Wiley’s portraiture that is “coercive rather than simply mimetic.” More than just capturing a likeness, Wiley’s portraits capture your mind and make you think about the power relations embedded in imagery of all kinds throughout history.

Wiley’s standard procedure has been to “street cast” individuals who catch his eye, invite them to his studio, allow them to browse art history books and pick a pose, and then photograph the subjects in full regalia to use for painting later. Wiley’s 2008 painting The Virgin Martyr St. Cecilia (shown above) riffs on Renaissance sculptor Stefano Maderno’s The Virgin Martyr St. Cecilia from 1600. From one perspective, the prone African-American male seems as powerless as the martyred saint. From another, the young man takes on the gravitas of Cecilia as a modern victim of thoughtless violence. From yet another, knowing that the young man chose this pose for himself, he takes on the role of provocateur, consciously drawing all those associations and more—paradoxically in control even when prone. This alchemical approach to art history is at the center of the “conceptual realism” Hobbs suggests.

Similar to Hobbs with his “conceptual realism,” Yale art history professor Sarah Lewis sees Wiley both celebrating and critiquing the idea of the portrait. Even the surface of the painting itself—the point at which the figures seem to merge with and/or struggle for attention against the decorative patterns—simultaneously employs the strengths of the genre of portraiture while pointing out its flaws. Lewis identifies Wiley as primarily a trickster (a title Wiley himself embraces from his African heritage), emphasizing that “[t]ricksters trouble our boundaries. They never promise deliverance.” Wiley pushes boundaries while erasing them, delivering only what we are able to bring to the work.

In what I felt was the most fascinating essay in the monograph, poet Brian Keith Jackson delves into the often overlooked homoerotic aspect of Wiley’s portraits and, consequently, Wiley’s homosexuality. “He is open,” Jackson describes Wiley’s orientation, “not openly.” An openly gay Wiley wouldn’t be able to operate as effectively among his subjects. “Knowing all, on either side,” Jackson believes, “would leave little room for exploration and energy… On set, Wiley’s presence exudes comfort and charm within substance and power.” Wiley’s celebration of the beauty of men of color, Jackson points out, makes Wiley’s The World Stage paintings—portraits of brown and black men in cultures around the world—even more important as it calls “attention to the fact that the way they are viewed has a direct connection to slavery, colonialism, and religion, if not all three.”

The Jewish Museum, New York is currently showing the latest installment of The World Stage paintings—Kehinde Wiley/The World Stage: Israel. The exhibition features 14 large-scale portraits of young Israeli men of different ethnic backgrounds and religions. A video on the museum’s website shows Wiley in Tel Aviv “street casting” and finding individuals such as Ethopian Jewish hip hop performer Kalkidan. Wiley finds hip hop in the unlikeliest places in Israel, proving the global reach of the art form that began in the Bronx as a means of “black” expression.

The title of Sean Kelly Gallery’s current Wiley exhibition, Kehinde Wiley: An Economy of Grace, could be an emblem for everything Wiley’s been doing for the past decade both locally and globally. “The phrase ‘an economy of grace’ speaks directly to the ways in which we manufacture and value grace and honor, the people that we choose to bestow that honor upon, and the ways in which grace is at once an ideal that we strive for and something that is considered to be a natural human right,” Wiley explains. Wiley’s trying to turn his personal economy of grace into a global economy, with his portraits as the new gold standard. As technology brings us closer and closer, the friction between individuals, countries, ideologies, religions, and everything else heats up faster than ever. Grace may be the only currency that can pull us out of the global spiritual debt crisis. If Kehinde Wiley seems to have the world in his hands right now, it’s because he wants to save it one image at a time by showing us the grace and beauty of black men and, by extension, the grace and beauty of us all.

[Many thanks to Rizzoli USA for providing me with the image above and a review copy of the monograph Kehinde Wiley, by Thelma Golden, Sarah Lewis, Robert Hobbs, and Brian Keith Jackson. Many thanks also to Sean Kelly Gallery (whose exhibition Kehinde Wiley: An Economy of Grace runs through June 16, 2012) and to The Jewish Museum, New York (whose exhibition Kehinde Wiley/The World Stage: Israel runs through July 29, 2012) for press materials.]