Who Was the Man Who Stole the Mona Lisa? 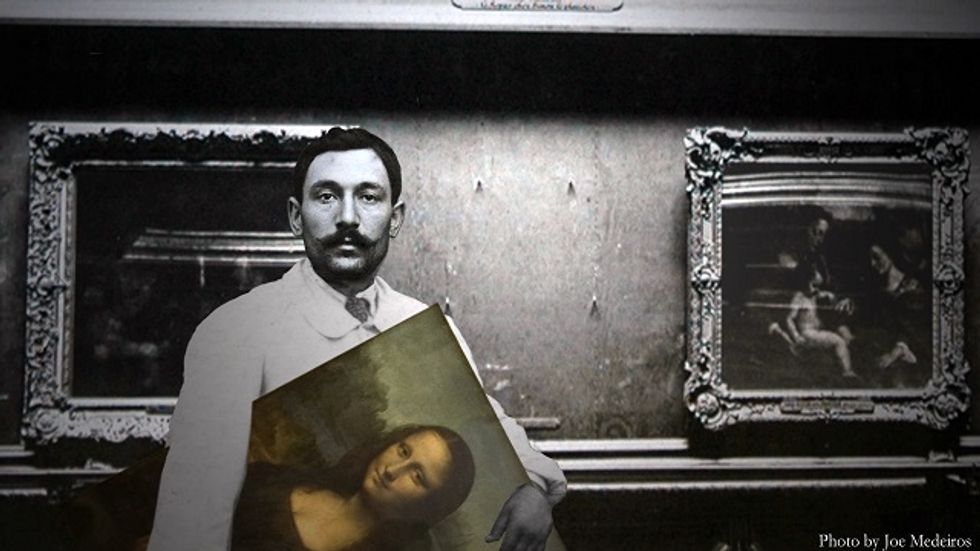 “Unimaginable!” roared Parisian newspaper headlines on August 23, 1911, the day after the Louvre discovered that someone had stolen Leonardo da Vinci's Mona Lisa. Who, everyone asked, took La Joconde, as the French called her? Two years passed before the world learned the thief’s name—Vincenzo Peruggia, an obscure, Italian housepainter. Although Peruggia’s name’s been synonymous with art theft for a century, who Vincenzo was has always remained a mystery. What made him take the painting in the first place? Filmmaker Joe Medeiros tries to solve that puzzle in his charming and eye-opening documentary, The Missing Piece: Mona Lisa, Her Thief, the True Story. Shuttling back and forth between Italy and France, just like Peruggia himself, Medeiros and his crew visit not just the scene of the crime, but also the scenes of Vincenzo’s life before and after the theft in search of the man behind the mask of the thief. The result speaks as much about the power of art as about the way history and its players never truly die.

The Missing Piece marks the end for Medeiros of a 35-year-long obsession with the theft of the Mona Lisa. After first reading of the theft in an art history book way back in 1976, Medeiros tried writing a screenplay based on the story. After struggling for years over how to fictionalize the tale, Medeiros decided to pursue the stranger and more interesting truth. Medeiros ransacked museums, archives, and libraries for scraps of information about Peruggia and the theft. The biggest step, and where the film begins, was tracking down Peruggia’s sole surviving descendent—his now 84-year-old daughter. Alas, Celestina was only 2 years old when Vincenzo literally died at her feet of a heart attack at just 44 years of age. The Missing Piece is as much a search for the truth as a quest for Celestina finally to “meet” the father she never knew.

The details of the theft itself are now known. Medeiros asks Vincenzo’s grandson Silvio to play the part of his grandfather as he comes face to face with the Mona Lisa on that fateful Monday in August 1911. Peruggia worked for a company hired by the Louvre to place protective glass over the more valuable paintings after a rash of vandalism, which had made the Louvre’s security a laughing stock. Knowing that on Mondays the Louvre was closed to the public, that workmen freely came and went, and that a scarce 12 guards protected the palace-sized building, Peruggia chose the perfect opportunity to pull the painting from the wall, slip unseen into a stairwell to remove the work from its frame, and then cover da Vinci’s bared masterpiece with his painter’s smock as he calmly walked out of the museum. Guards who noticed the painting missing later that day assumed that it had been removed for photographing for postcards or other promotional reasons, so it wasn’t until the next day that the truth was discovered. By Wednesday, all of Paris mourned the missing Mona, with some placing flowers at the Louvre’s doorstep as if for a missing loved one. Little did those art lovers or the police suspect that La Joconde sat less than 2 miles away from her previous home in the closet of a tiny apartment rented by the unassuming little house painter from Italy.

But those details don’t answer why Peruggia did it. When Medeiros asks his daughter, Celestina repeats the family tales of Vincenzo’s discrimination by the French. “Sal macaroni,” the French would sneer at Peruggia, which means “Dirty macaroni.” With his diminutive, 5 foot 3 inch stature, humble profession, and heavily accented French, Peruggia faced powerful discrimination as a foreigner that poisoned his opinion of the French and of France, which at that time had become the excitingly modern capitol of early 20th century. Even before the theft of the Mona Lisa, French police arrested Peruggia twice on charges that now stink of ethnic profiling. Struggles with alcoholism and the occupational hazard of lead poisoning from handling lead-based house paint further impaired Peruggia’s judgment. Poisoned physically and psychologically during his time in France, Peruggia may have finally decided to enact a kind of patriotic revenge against the French and their Louvre, the home of so many Italian masterpieces looted by Napoleon during his eponymous wars. The fact that Francis I of France rightfully paid da Vinci for the Mona Lisa didn’t matter to Peruggia. La Joconde was Italian, they were French, and, perhaps most importantly, da Vinci’s painting was small enough to smuggle out the door easily.

The Missing Piece masterfully recreates through archival footage and documents the different stages of Mona-mania—first in France during the frantic search, and later in Italy after the triumphant “return” of Mona to her native soil. Everyone seemed to be a suspect from the Germans, who were already on the road to World War I, to Pablo Picasso, whose earlier accidental purchase of sculptures stolen from the Louvre made him a suspect. Yet, despite his access, the police never took Peruggia seriously as a suspect. An investigator visited Peruggia in his apartment, but never bothered to search the closet where he hid the painting or even to see if Peruggia’s fingerprints matched the print left on the discarded frame’s glass. The same discrimination that made Peruggia feel like a nobody in France worked to his advantage in the search for the thief. Such a great crime must have been performed by a great criminal, the authorities reasoned. “Common” criminals such as Peruggia were, they thought, incapable of pulling it off.

Peruggia held onto the Mona Lisa for 2 years, until he decided to contact an antiques dealer in Florence to broker a deal with an Italian museum. Peruggia’s asking price of 500,000 lire (a little under $3 million today) would set him up for life. Did Peruggia steal for patriotism, profit, or both? The Missing Piece makes a compelling final argument for why Vincenzo did what he did, which later makes for great filmmaking when Medeiros returns to Celestina with his findings. Regardless of motive, Peruggia soon found himself arrested for the crime and a pseudo-patriotic hero to the Italians. At a trial that brought his mental competence into question, Peruggia received a sentence of little more than a year of prison time, but actually served just over half of that. Barely home from jail, Vincenzo quickly found himself fighting for Italy in World War I and captured by the Germans as a prisoner of war. Like the Mona Lisa, Peruggia sat in exile from his home for 2 years. After the war, Peruggia returned to Paris with his young wife to start their family. He even visited the Louvre, commenting while there to his wife that his fame would outlast the Louvre itself.

The Missing Piece: Mona Lisa, Her Thief, the True Story, now playing in select theaters across America, proves William Faulkner’s adage that “The past is never dead. It's not even past.” Vincenzo Peruggia lives on in his daughter and grandchild as cherished family stories and photos, but The Missing Piece allows him to live on as an individual caught up in the forces of nationalism and modernism that threatened to crush him. It’s easy to find sympathy for this devilish rogue with the stylish fedora and mustache who stepped so easily into history and, unwittingly, made art history. Without the theft and the resulting Mona-mania, the Mona Lisa would not be the most famous painting in the world today. With warm, human-centered storytelling and amusing, Terry Gilliam-esque animation, Medeiros’ The Missing Piece makes history personal while celebrating the power of art on the individual. Of all the remarkable details of Vincenzo Peruggia’s story, one of the most remarkable is the care with which he handled the Mona Lisa while it was in his hands—a testament to the love and respect he had for the painting. Medeiros’ The Missing Piece handles Peruggia’s story with the same love and respect, resulting in a small, charming masterpiece that will make you, like Mona herself, smile.

[Many thanks to Joe and Justine Medeiros for providing me with the image above from, press materials related to, and viewing access to The Missing Piece: Mona Lisa, Her Thief, the True Story, now playing in select theaters across America.]