How Photography Feeds Our Fascination With the Civil War 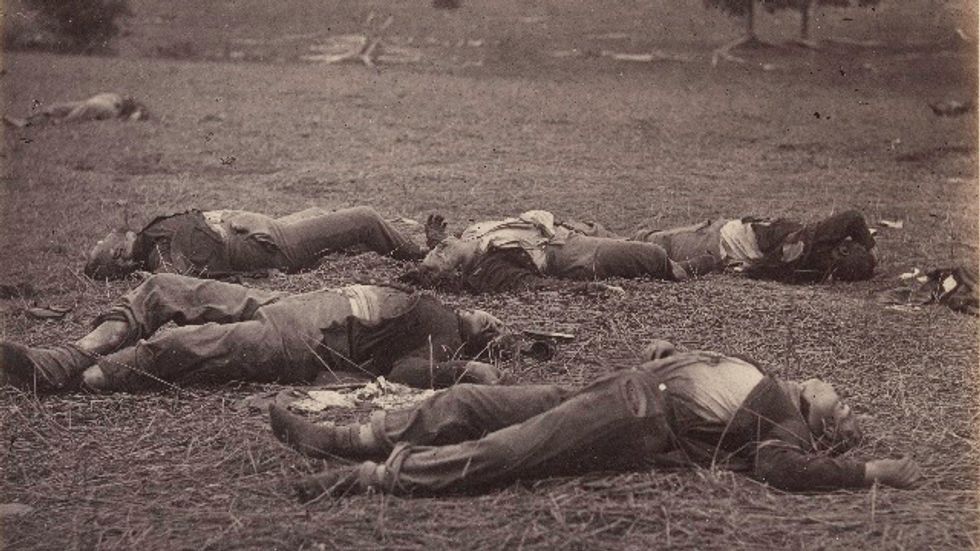 It is believed that the first war-related photographs were taken in 1847 by an anonymous photographer during the Mexican–American War, of which we “Remember the Alamo” and little else. But when we think of the American Civil War, especially in this sesquicentennial year, we quite vividly picture the war thanks to the army of photographers that captured that conflict through the still-young medium and brought it back to the home front. The Metropolitan Museum of Art’s new exhibition, Photography and the American Civil War, studies how the “War Between the States” lives on as a dialogue between the modern viewer and century-and-a-half-old images as raw and fresh as pictures of contemporary wars beamed into our homes today. Of all the aspects of memory that feed our fascination with the Civil War, photography provides the single element that continually leaves us hungry for more.

It’s believed that somewhere around 1,000 photographers worked separately and/or together during the Civil War period to take the hundreds of thousands of photographs that circulated around the country and the world. Soldier on both sides rushing off to war stopped just long enough to pose for a photographic portrait for those left behind. The exhibition offers many of the familiar portraits of Union soldiers, but also (thanks to the amazing collection of David Wynn Vaughan) rare ambrotypes (glass) and tintypes (iron) of Confederate soldiers. These portraits truly illustrate democracy in action by ranging across all classes—from the simplest army private to generals to President Abraham Lincoln and even to slaves such as the man known as “Gordon,” who posed for the infamous Scourged Back photograph that became visual shorthand for the cruelties of slavery.

On July 4, 1863, the popular magazine Harper’s Weekly published a special “Independence Day” issue featuring a wood engraving of The Scourged Back, at the same time that the Battle of Gettysburg roiled in Pennsylvania.  Post-battle photographs from Gettysburg, such as Timothy H. O'Sullivan’s Field Where General Reynolds Fell, Gettysburg (shown above), brought home the massive toll of this single battle. (The Met specifically timed this exhibition to coincide with the anniversary of Gettysburg as a sign of that battle’s central position in the influence of Civil War photography.) General John F. Reynolds fought bravely and led his men admirably at the Second Battle of Bull Run, the Battle of Fredericksburg, and the Battle of Chancellorsville, but was killed instantly by a sniper’s bullet on the first day of Gettysburg. (Major General Abner Doubleday, the apocryphal father of baseball, took Reynolds’ place.)

An etching titled The Fall of Reynolds soon appeared to appeal to the traditional taste for heroic, romantic war, but photographs such as O’Sullivan’s fed the growing appetite for greater realism and honesty in depicting the stark reality of battle. O’Sullivan’s photograph of Reynolds fall found its way into Gardner’s Photographic Sketch Book of War, a two-volume collection compiled by Alexander Gardner featuring the photography of 11 artists, including Gardner himself. Among the 10 plates showing Gettysburg in the book, O’Sullivan’s A Harvest of Death, Gettysburg, and Gardner’s Home of a Rebel Sharpshooter, Gettysburg, remain not just some of the time’s most powerful wartime photos, but also rank among the finest of all early photographs.

The Met plans to complement this photography exhibition with The Civil War and American Art (May 28 to September 2, 2013) and a show of American prints by Winslow Homer, Thomas Nast, and others related to the Civil War (May 20 to August 25, 2013). As much as I love the paintings and sculptures of this time, the photographs reach out in a way that the older, classical media cannot. Try to imagine Ken Burns’ The Civil War done without photographs. You just can’t. The immediacy and connectivity of photography from the Civil War period, despite the 150-year gap, plug right into the visual culture of today in a way that paintings, sculptures, and etchings cannot.

“I Sell the Shadow to Support the Substance,” Sojourner Truth inscribed on the portrait of herself she used as her abolitionist calling card. These “shadows,” these photographic echoes of people and events long past, still “support the substance” of what took place on a human scale at that time and continues to take place in our age of seemingly endless wars. Mathew Brady, Gardner, and other photographers continue to catch flak for staging some Civil War photos to enhance the pathos (see, for example, “The Case of the Moved Body”), but the truth of the images presented in Photography and the American Civil War really lies not in how they made them but in how our ancestors once used them and, more importantly, how we use them today. I plan on visiting Gettysburg with my family this July to see the reenactments of those four terrible days. I’ll be watching living men and women before me, but in my mind’s eye I’ll be continually comparing them to the pictures in my head—those perpetual reenactors.

[Many thanks to The Metropolitan Museum of Art, New York, for providing me with the image above and other press materials related to Photography and the American Civil War, which runs through September 2, 2013.]