Did the Vatican Ruin the Sistine Chapel Frescoes? 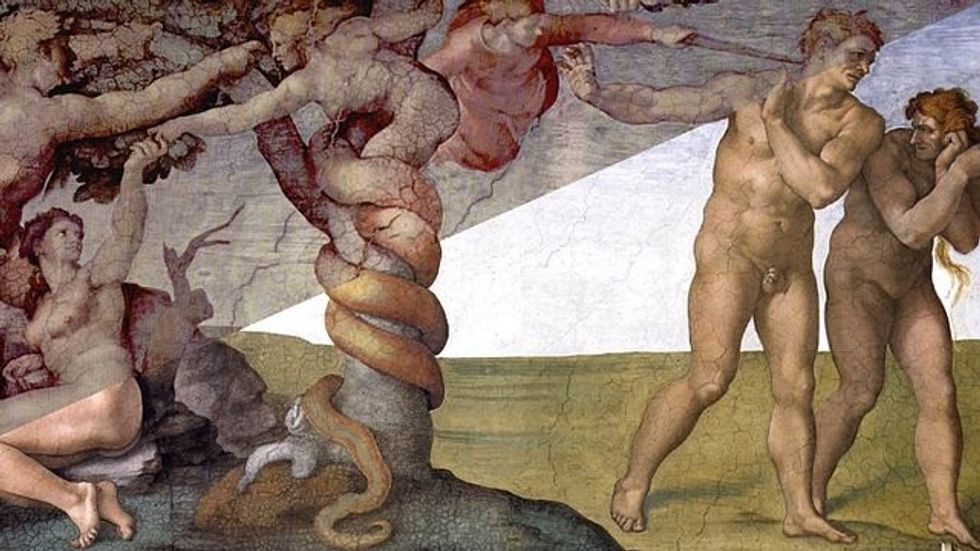 One of the most unforgettable spiritual and artistic experiences I’ve encountered in my life happened in the Sistine Chapel years ago. Straining my neck as fellow tourists did the same, I looked up at Michelangelo’s ceiling frescoes in awe—both at the wondrous expression of faith and at the sheer magnitude of human achievement. When I learned that my very breath and perspiration could contribute to the slow destruction of the frescoes, I felt sad. However, when I read Art Watch UK’s accusation that the Vatican undertook a 20-year restoration project of the frescoes “in full knowledge that the stripped-down bare fresco surfaces would thereafter be attacked by atmospheric pollution unless given some other protective covering” (which has not yet happened), I felt rage over the local mismanagement of a global cultural treasure. Did the Vatican ruin the Sistine Chapel frescoes?

In the first part of a series, Art Watch UK lays it out plainly from the beginning: “The Vatican authorities are in conservation crisis today because they stripped the Sistine Chapel frescoes bare in the 1980s and 1990s. They did so against material and historical evidence that Michelangelo had finished off his frescoes with additional glue or size-based a secco painting.” I’ve watched documentary films about the restoration and read plenty of books with generous “before and after” images (such as the one above) all praising the restoration as removing centuries of grime and dirt that stood between modern viewers and how Michelangelo himself saw the frescoes and wanted posterity to see them. After the dimness of the “before” pictures, the “after” images seemed like sunshine flooding into the chapel—a time machine carrying us back to the Renaissance itself.

However, Art Watch UK argues that the “brighter is better” adage is anachronistic, something we accept today but was not accepted in Michelangelo’s day. Citing (with a photograph) Marcello Venusti ‘s1549 copy of Michelangelo’s Last Judgement “which was made not only within Michelangelo’s lifetime but also met with his approval,” they contend that the original frescoes were meant to be darker in overall tone. I’m reminded of a similar, more recent restoration fiasco involving Thomas Eakins’ The Gross Clinic. Years after the artist’s death, overzealous conservators stripped away darkening varnishes applied by Eakins to reveal the brighter colors beneath that were more in line with the Impressionism then en vogue. Even when Eakins’ widow, painter Susan Macdowell Eakins, swore that her husband intended the darker tone, her voice when unheeded until the 21st century, when modern restoration efforts returned the painting through archival research to something approximating its original look.

The Art Watch UK piece indicts not just the Sistine Chapel conservation effort, but also the entire conservation world. “Ironically, the ‘cleaning’ of the ceiling, which arguably constitutes the greatest single restoration calamity of the 20th century, occurred at a time when picture restorers had skillfully rebranded themselves as safe, scientifically validated ‘conservators’ of all that is valuable,” they write, “even though Kenneth Clark had recently admitted to having founded the National Gallery’s science department in the late 1930s in order to dupe the public and wrong-foot restoration critics.” Thus, conservation itself becomes an elaborate con game, with, in this case, the Vatican as the dupe. “The authorities at the Vatican seemed quite oblivious of the ease with which even the most modest restorations can escalate into dangerous and irreversible treatments,” Art Watch UK acidly accuses.

The article does step back from that hard-hitting position by adding in an appendix Kathleen Weil Garris Brandt’s more level-headed point that “the conservation of any work of art is doomed to failure unless equal emphasis is given to its past and its future vicissitudes…Scientists and historians worry that conservators can be too ready to intervene, too impatient of prior tests, and insufficiently heedful of future dangers.” Conservators should hesitate to go where even angels fear to tread (or clean, in this case) unless they follow the oath to do no harm, i.e., make no permanent changes that later generations can’t undo in the light of additional information. I’ve heard enough conservation success stories full of patient, thoughtful respect not just for the work, but also for all those who wish to enjoy it now and hereafter to believe that this possible abomination is an aberration—malpractice on an epic scale that deserves note but not something that should bring down a whole discipline.

Creeping papal infallibility over the past couple of centuries threatens to go beyond matters of faith into all fields of human knowledge, but it seems time for the Vatican, in at least this matter, to admit it goofed. The main point of asking the question of whether the Vatican ruined the Sistine Chapel frescoes isn’t to assign blame, but rather to salvage these treasures before it is too late. The first step, however, is admitting that something must be done quickly. The truth, as always, will set them free.

[Image: Michelangelo. The Fall and Expulsion of Adam and Eve in the Sistine Chapel, before and after restoration. Image source.]